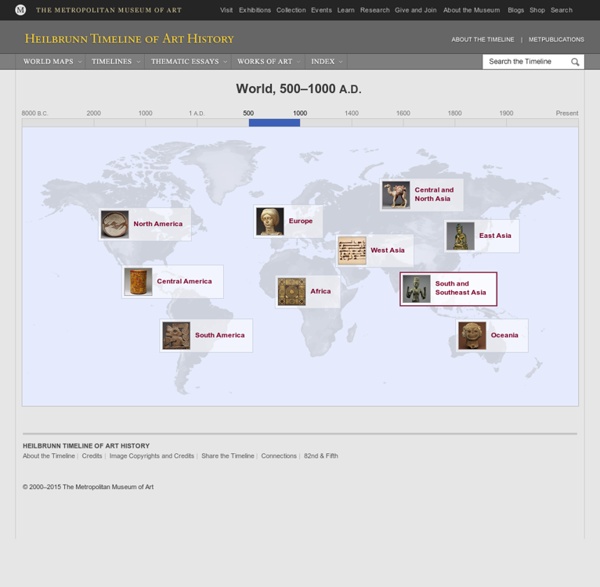 The Real Banksy This was my Easter special, got very little awareness really. It’s a shame because I was particularly pleased with the way the layers came out. What do you lot think? 100 Ideas That Changed Art by Maria Popova From cave paintings to the internet, or how art and cultural ideology shape one another. On the heels of yesterday’s 100 Ideas That Changed Photography comes 100 Ideas That Changed Art (public library) — a succinct account of the most influential developments in the history of art, from cave paintings to the internet, compiled by art historian and broadcaster Michael Bird. From conceptual innovations like negative space (#98), color codes (#33), and street art (#94) to landmarks of communication like making books (#21), propaganda (#12), and handwriting (#24) to ideological developments like “less is more” (#30), protest (#79), and the body as surface (#9), each idea is contextualized in a 500-word essay with key visual examples.

Building a Celtic Roundhouse The walls of roundhouses were either dry stone filled in with clay and straw, or a ring of support poles weaved with wattling and plastered in daub, or a mixture of both stone and wattling as being built here (left). Wattle and daub is one of the oldest building techniques dating back to the Bronze Age and beyond. Wattling is a way to build walls by weaving long flexible sticks in and out of upright posts. Hazel, which is pliable and grows naturally long, is a good species to use for wattle. It is also the preferred wood used by straw bale builders to pin bales together.

The Art Damien Hirst Stole Watch the video here. See press coverage and more info here. This article was published online by 3ammagazine.com and in print by The Jackdaw Sept/Oct 2010 issue. Read The Art Damien Hirst Stole Part 2 here Baroque art, an introduction – Smarthistory Gian Lorenzo Bernini, View to Cathedra Petri (or Chair of St. Peter), 1647-53, gilded bronze, gold, wood, stained glass (Apse of Saint Peter’s Basilica, Vatican City, Rome) (photo: Steven Zucker, CC BY-NC-SA 2.0) Rome: From the “Whore of Babylon” to the resplendent bride of Christ When Martin Luther tacked his 95 theses to the doors of Wittenberg Cathedral in 1517 protesting the Catholic Church’s corruption, he initiated a movement that would transform the religious, political, and artistic landscape of Europe.

Y-chromosomal Adam In human genetics, Y-chromosomal Adam (Y-MRCA) is a hypothetical name given to the most recent common ancestor (MRCA) from whom all currently living people are descended patrilineally (tracing back only along the paternal or male lines of their family tree). However, the title is not permanently fixed on a single individual (see below). Y-chromosomal Adam is named after the biblical Adam, but the bearer of the chromosome was not the only human male alive during his time.[1] His other male contemporaries could also have descendants alive today, but not, by definition, solely through patrilineal descent. Analogous to Y-chromosomal Adam, Mitochondrial Eve is the woman from whom all living humans are descended matrilineally, who lived about 140,000 to 200,000 years ago in Africa.

Summary of the American Academy of Arts and Letters records, 1864-1942 American Academy of Arts and Letters, est. 1904 Society New York, N.Y. Collection size: 800 items (on 5 microfilm reels). Collection Summary: A collection of artists' papers containing correspondence, notes, biographical material, exhibition catalogs, and other published material. Includes: volume of notes, drawings, and calculations made by George Bellows for a study of Jay Hambidge's theory of Dynamic Symmetry; correspondence and published and unpublished biographical and critical material on George de Forest Brush, Childe Hassam, Francis D. Millet, Joseph Pennell, Elihu Vedder, and J. Q. EMPTY KINGDOM TOP 100 Artists of 2013 [Photo by: Shelbie Dimond] 939 is the magic number for EK in 2013. 939 only has 4 factors: 1, 3, 313, 939…which doesn’t really have any significant meaning relating to our TOP 100. AMD made a CPU called the Socket 939 back in June 2004…but we’re not sponsored by them nor any other computer tech company to supply us with the machines that we need to run EK. The year 939 in Roman numerals is CMXXXIX…which doesn’t mean crap since none of us use Roman numerals anymore. According to HistoryOrb.com, 4 major events took place in year 939 that were documented:July 8th (The Major Occultation, or Ghaybat el-Kubra of Muhammad al-Mahdi),August 6th (Battle at Simancas – Spain beats Moors),October 2nd (Battle at Andernach: King Otto & Hermann of Zwaben beat Eberhard of France & Giselbert of Lutherans),October 27th (Edmund I succeeds Athelstan as King of England)…which all has nothing to do with EK.

History of Western Art: Renaissance to Revolution, 1300 – 1800 Who was Leonardo da Vinci? Who were the great female artists of the Baroque? What role did art play in the French Revolution? This course will survey art and architecture made from the Late Gothic in Italy through the Enlightenment. We will focus on turning points in the historical narrative including the rise of Florence and Siena, the Reformation and its impact on Baroque art in Catholic and Protestant Europe, the scientific revolution, and the political revolutions of the 18th century. The art and architecture produced from the early 1300s to the end of the 1700s saw some of the most important art the world has ever produced and laid the foundation for the world we live in now. How Whole Turmeric Heals The Damaged Brain Long considered impossible to accomplish, new research reveals how a simple spice might contribute to the regeneration of the damaged brain. Turmeric is hands down one of the, if not the, most versatile healing spice in the world with over 600 experimentally confirmed health benefits, and an ancient history filled with deep reverence for its seemingly compassionate power to alleviate human suffering. But, most of the focus over the past decade has been centered on only one of its many hundreds of phytocompounds: namely, the primary polyphenol in turmeric known as curcumin which gives the spice its richly golden hue.

10 Psychological Experiments That Went Horribly Wrong Psychology as we know it is a relatively young science, but since its inception it has helped us to gain a greater understanding of ourselves and our interactions with the world. Many psychological experiments have been valid and ethical, allowing researchers to make new treatments and therapies available, and giving other insights into our motivations and actions. Sadly, others have ended up backfiring horribly — ruining lives and shaming the profession. Here are ten psychological experiments that spiraled out of control. 10. Stanford Prison Experiment