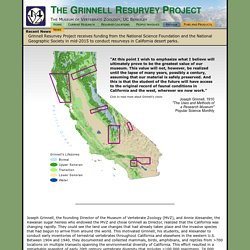 Resurveys of birds in California's Central Valley initiated in summer 2015. Resurvey Before and After Photos Joseph Grinnell, the founding Director of the Museum of Vertebrate Zoology (MVZ), and Annie Alexander, the Hawaiian sugar heiress who endowed the MVZ and chose Grinnell as Director, realized that the California was changing rapidly. They could see the land use changes that had already taken place and the invasive species that had begun to arrive from around the world. Trait data from plant individuals across heterogeneous sources. 1. 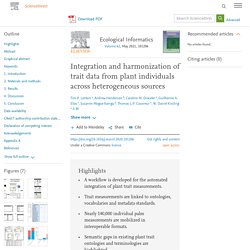 Introduction The integration and harmonization of data from heterogeneous sources is one of the biggest challenges in current ecological research (Farley et al., 2018). Like many other branches in biology, ecology has seen a strong increase in data availability over the past few decades (Farley et al., 2018). This increase corresponds to a general trend in the accumulation of data volumes, exponentially increasing in the past decade (Chen et al., 2014). Phenological change modelling for selected Himalayan medicinal herbs using herbarium records: A case study. Natural History Collections: Advancing the Frontiers of Science. Natural history collections – whether a natural history museum, botanical garden, herbaria, tissue collection, university-based biodiversity collection, or a living stock collection – are a global network of research institutions and affiliated scientists and educators that are a foundation for interdisciplinary and global research and education. 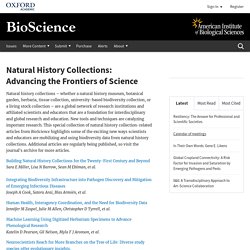 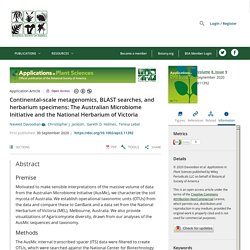 Due to their fundamentally microscopic nature and their usually ephemeral reproductive structures (e.g., mushrooms, apothecia, etc.), the identification of fungi has historically been exceptionally difficult, relying on often artificial groupings based on limited morphological features. The advent and maturation of molecular approaches has revolutionized mycology; in the past two decades, a significant number of new orders, classes, and even phyla have been described (Schüβler et al., 2001; Zalar et al., 2005; Hosaka et al., 2006; Schoch et al., 2009; Rosling et al., 2011; Hodkinson et al., 2014). The results of the BLAST analysis are included in Appendix S1.

Acknowledgments. Scientists Use Century-Old Seaweed to Solve a Marine Mystery. There are few things I enjoy more than turning a slimy piece of seaweed into a work of art. 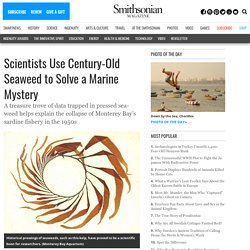 From scouring the tide pools for the perfect blades, to artfully arranging them on a piece of paper in my herbarium press, every step of the process is immensely satisfying. Using the same technique that people use to press flowers, I can turn almost any algae into a natural work of art that can last for centuries. Although I press algae for artistic purposes, algae pressing has long been a scientific pursuit. The practice emerged in 19th-century England as a way for scientists and natural history buffs to preserve and catalog the diverse array of seaweeds found along the country’s coasts. Women were among the most avid algae pressers. Plastome sequencing of a 167-year-old herbarium specimen and classical morphology resolve the systematics of two potentially extinct grass species.

Sequencing of a 167yo herbarium specimen has finally resolved a longstanding 'dustbin' group in the grasses. The work is part of a trend of increasingly ambitious genetic work on old specimens. My latest for Botany One. #iamabotanist. Systematics of extinct grass species resolved with sequencing of 167-year-old herbarium specimen. The possibly extinct Philippine pitcher plant. AUS: Tracking data usage: ecology, ed, cit sci. Abstract Premise of the Study Globally, natural history collections are focused on digitizing specimens and information and making these data accessible. 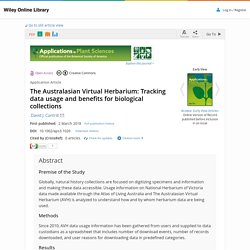 Usage information on National Herbarium of Victoria data made available through the Atlas of Living Australia and The Australasian Virtual Herbarium (AVH) is analyzed to understand how and by whom herbarium data are being used. Methods. Herbarium data: Global biodiversity and societal botanical needs for novel research - James - 2018 - Applications in Plant Sciences. Areas of plant diversity—What do we know? - Brummitt - Over 200 years ago the geographer and naturalist Alexander von Humboldt, exploring the New World with the botanist Aimé Bonpland, famously wrote home to his brother from Venezuela in 1799 to say that he and Bonpland “… rush around like the demented, in the first 3 days we were unable to classify anything … Bonpland assures me he will go mad if the wonders do not cease soon” (Stearn, 1988). 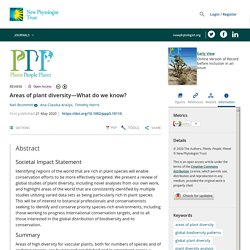 Since this time it has long been recognized that tropical regions house the greatest diversity of plant species, the new discovery of which will continue for many years into the future (Joppa, Roberts, Myers, & Pimm, 2011). The following 19th century is widely considered to have been the high water mark of biological exploration, as first European and later local scientists and explorers pressed ever further into remote regions. Humboldt was the later inspiration, through his acclaimed Personal Narrative (von Humboldt, 1818), of both Charles Darwin, who circumnavigated the world on H.M.S. Herbarium specimens' varied uses. While some might press flowers into books to preserve their beauty, researcher Mark Whitten does it to preserve history. 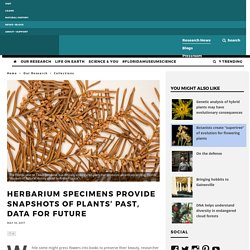 Whitten, a botanist in the Florida Museum of Natural History Herbarium, glues pressed plants onto archival paper and stores them as specimens in the museum’s collection. He said herbarium specimens show data about plants’ location, habitat, flowers and fruits at the time of their collection. With this information, researchers are starting to make connections about recent climate change and its influence on the seasonal cycles of plants, or plant phenology. Whitten said researchers lack good observational records on when plants start to flower, produce fruit or form leaves, which is where herbarium specimens come in. This specimen was prepared by Florida botanist Robert K. A special journal explains the critical importance of biological collections.

Tropical Plant Collections: Legacies from the Past? Essential Tools for the Future? Henrik Balslev and Ib Friis, Editors. Ep. 169 - Herbaria Are Data Gold Mines. Phenology, population size, distribution, genetic diversity - these are just some of the data locked up in herbaria around the globe. 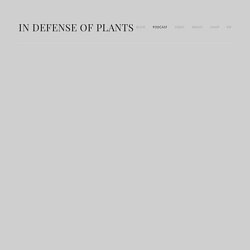 My guest today is Katelin Pearson and she has been working hard on making sure herbarium data are as available as they can be to everyone from scientists to artists, and even the general public. Digital Collections Programme – Blogs from the Natural History Museum. There is an incredible amount of specimen data providing critical information on the natural world, but with less than 10% of the estimated 1.5 billion specimens digitally accessible, who is using this information? 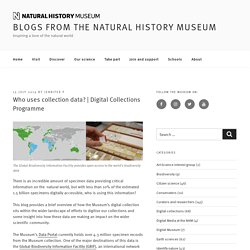 This blog provides a brief overview of how the Museum’s digital collection sits within the wider landscape of efforts to digitise our collections and some insight into how these data are making an impact on the wider scientific community. The Museum’s Data Portal​ currently holds over 4.3 million specimen records from the Museum collection. Green digitization: Botanical collections data answer real-world questions.

Even as botany has moved firmly into the era of "big data," some of the most valuable botanical information remains inaccessible for computational analysis, locked in physical form in the orderly stacks of herbaria and museums. Herbarium specimens are plant samples collected from the field that are dried and stored with labels describing species, date and location of collection, along with various other information including habitat descriptions. The detailed historical record these specimens keep of species occurrence, morphology, and even DNA provides an unparalleled data source to address a variety of morphological, ecological, phenological, and taxonomic questions.

Now efforts are underway to digitize these data, and make them easily accessible for analysis. iDigBio is funded by the U.S. Good Argument for Herbaria; there uses. Herbarium Samples in Evolutionary Botany. Harvesting Collections for Social Benefit: Hidden Stories at the Herbarium of RBGE. Background to the project. The advent of the era of Big Data has highlighted a truism in scientific discovery: an inference is only as good as the data that underlie it. While it is tempting to believe that large, open-access data repositories are a recent invention, in fact scientific collections such as herbaria have been filling this purpose for hundreds of years.

But, while the data in these collections are nearly always open (e.g., the Royal Botanic Garden Herbarium has shared specimens with any who so request since at least the 1960s), they are not always accessible. Editorial: Integrative and Translational Uses of Herbarium Collections Across Time, Space, and Species. This Research Topic is dedicated to the legacy of Vicki Funk [1947-2019], who was a Senior Research Botanist and Curator at the Smithsonian’s National Museum for 38 years, and a strong advocate for collections-based research. Frontiers in Plant Science. Frontiers in Plant Science is a leading journal in its field, publishing rigorously peer-reviewed research that seeks to advance our understanding of fundamental processes in plant biology. Field Chief Editor Joshua L. Heazlewood at the University of Melbourne is supported by an outstanding Editorial Board of international researchers. This multidisciplinary open-access journal is at the forefront of disseminating and communicating scientific knowledge and impactful discoveries to researchers, academics, policy makers and the public worldwide.

Harris Plant lists and herbarium collections. Herbarium: An Echo of a Past Love. NHM Botany sur Twitter : "The Reverend Adam Buddle's #herbarium specimen of Equisetum ramosissimum pushed back the first British record of this plant by over 250yrs. Cystopteris diaphana was first considered a British wild plant in 2000. Buddle's specimen. Stories from California Herbaria. ​It can be hard to imagine Greater Los Angeles as anything other than the bustling, vibrant, hot, and smoggy metropolis that it currently is. The massive LA metropolitan area is home to some 12.8 million people packed into a sprawling 4,850 square miles dominated by roads, buildings, suburban developments, apartment complexes, and parking lots. But what did it used to look like? 50-Year-Old Biology Collection Enables New Research Opportunities. Texas Tech University’s E.L. Reed Herbarium is now the official repository for plant specimens from Guadalupe Mountains National Park.

Thanks to the work of two Texas Tech University researchers half a century ago, a new agreement between the university and the National Park Service will benefit both for the foreseeable future.