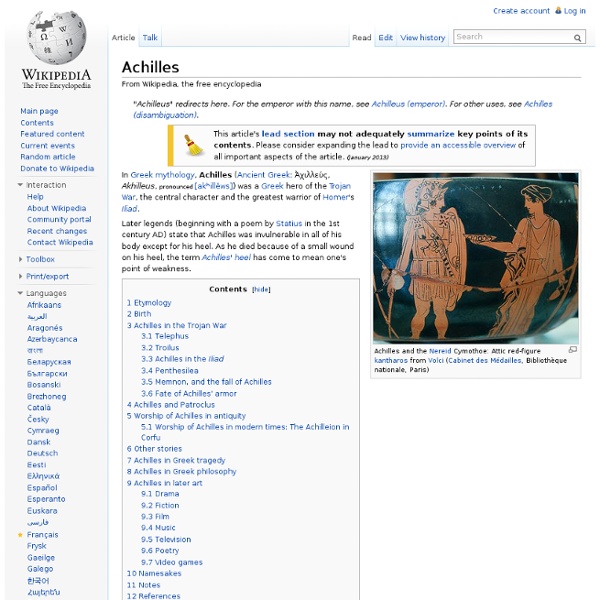 In Greek mythology, Achilles (/əˈkɪliːz/; Ancient Greek: Ἀχιλλεύς, Akhilleus, pronounced [akʰillěws]) was a Greek hero of the Trojan War and the central character and greatest warrior of Homer's Iliad. Achilles was said to be a demigod; his mother was the nymph Thetis, and his father, Peleus, was the king of the Myrmidons. Etymology[edit] Achilles' name can be analyzed as a combination of ἄχος (akhos) "grief" and λαός (Laos) "a people, tribe, nation, etc." In other words, Achilles is an embodiment of the grief of the people, grief being a theme raised numerous times in the Iliad (frequently by Achilles). Achilles' role as the hero of grief forms an ironic juxtaposition with the conventional view of Achilles as the hero of kleos (glory, usually glory in war). Birth[edit] Achilles was the son of the Nereid Thetis and Peleus, the king of the Myrmidons. However, none of the sources before Statius makes any reference to this general invulnerability. Achilles in the Trojan War[edit] Troilus[edit]

Proserpina Ancient Roman goddess Cult and myths[edit] Origin as Libera[edit] Venus Second planet from the Sun in the Solar System Venus is a terrestrial planet and is sometimes called Earth's "sister planet" because of their similar size, mass, proximity to the Sun, and bulk composition. It is radically different from Earth in other respects. It has the densest atmosphere of the four terrestrial planets, consisting of more than 96% carbon dioxide. The atmospheric pressure at the planet's surface is about 92 times the sea level pressure of Earth, or roughly the pressure at 900 m (3,000 ft) underwater on Earth. Venus has, by far, the hottest surface of any planet in the Solar System, with a mean temperature of 737 K (464 °C; 867 °F), even though Mercury is closer to the Sun.

Polydorus of Troy Polydorus or Polydoros (; Ancient Greek: Πολύδωρος, i.e. "many-gift[ed]") is the youngest son of Priam and Hecuba in the mythology of the Trojan War. Polydorus is an example of the fluid nature of myth, as his role and story vary significantly in different traditions and sources. Mythology[edit] In the Iliad[edit] Calydon Greek city in ancient Aetolia The Laphrion sanctuary plateau of Calydon with Varasova mountain on the background. Calydon or Kalydon (; Ancient Greek: Καλυδών) was a Greek city in ancient Aetolia, situated on the west bank of the river Evenus, 7.5 Roman miles (approx. 11 km) from the sea.[1] Its name is most famous today for the Calydonian Boar that had to be overcome by heroes of the Olympian age. Mythology[edit] The heroes of Calydon are among the most celebrated of the heroic age.

Pygmalion Pygmalion or Pigmalion may refer to: Mythology[edit] Stage[edit] Film[edit] Music[edit] People[edit] Juno From Wikipedia, the free encyclopedia Jump to navigationJump to search Juno may refer to: Biology[edit] Business[edit] Fiction[edit] Middle-earth objects J. R. R. Aetolia Region of Ancient Greece Aetolia (Greek: Αἰτωλία, romanized: Aἰtōlía) is a mountainous region of Greece on the north coast of the Gulf of Corinth, forming the eastern part of the modern regional unit of Aetolia-Acarnania. Geography[edit] The Achelous River separates Aetolia from Acarnania to the west; on the north it had boundaries with Epirus and Thessaly; on the east with the Ozolian Locrians; and on the south the entrance to the Corinthian Gulf defined the limits of Aetolia. In classical times Aetolia comprised two parts: "Old Aetolia" (Greek: Παλιά Αιτωλία, romanized: Paliá Aitolía) in the west, from the Achelous to the Evenus and Calydon; and "New Aetolia" (Greek: Νέα Αιτωλία, romanized: Néa Aitolía) or "Acquired Aetolia" (Greek: Αἰτωλία Ἐπίκτητος, romanized: Aitolía Epíktitos) in the east, from the Evenus and Calydon to the Ozolian Locrians.

Pyramus and Thisbe Plot[edit] In Ovid's Metamorphoses, Pyramus and Thisbe are two lovers in the city of Babylon who occupy connected houses/walls, forbidden by their parents to be wed, because of their parents' rivalry. Through a crack in one of the walls, they whisper their love for each other. They arrange to meet near Ninus' tomb under a mulberry tree and state their feelings for each other.

Jupiter Fifth planet from the Sun in the Solar System Formation and migration Astronomers have discovered nearly 500 planetary systems with multiple planets. Regularly these systems include a few planets with masses several times greater than Earth's (super-Earths), orbiting closer to their star than Mercury is to the Sun, and sometimes also Jupiter-mass gas giants close to their star. Earth and its neighbor planets may have formed from fragments of planets after collisions with Jupiter destroyed those super-Earths near the Sun. As Jupiter came toward the inner Solar System, in what theorists call the grand tack hypothesis, gravitational tugs and pulls occurred causing a series of collisions between the super-Earths as their orbits began to overlap.[24] Researchers from Lund University found that Jupiter's migration went on for around 700,000 years, in a period approximately 2–3 million years after the celestial body started its life as an ice asteroid far from the sun.

Shelob Literature[edit] Shelob was an "evil thing in spider-form...[the] last child of Ungoliant to trouble the unhappy world",[1] living high in the Ephel Dúath mountains on the borders of Mordor. There are numerous references to her predating the events of The Lord of the Rings by many ages.

Laocoön Trojan priest in Greek and Roman mythology Laocoön (;[1][2][Note 1] Ancient Greek: Λαοκόων, IPA: [laokóɔːn]), the son of Acoetes, is a figure in Greek and Roman mythology and the Epic Cycle.[3] He was a Trojan priest who was attacked, with his two sons, by giant serpents sent by the gods. The story of Laocoön has been the subject of numerous artists, both in ancient and in more contemporary times. Death[edit] The most detailed description of Laocoön's grisly fate was provided by Quintus Smyrnaeus in Posthomerica, a later, literary version of events following the Iliad.

Pyrrha Deucalion and Pyrrha throwing rocks that become babies. Etymology[edit] In Latin the word pyrrhus means red from the Greek adjective πυρρός, purrhos, i.e. "flame coloured", "the colour of fire", "fiery red" or simply "red" or "reddish".[2][3] Pyrrha was evidently named after her red hair as Horace[4] and Ovid describes her as red haired. Mythology[edit]