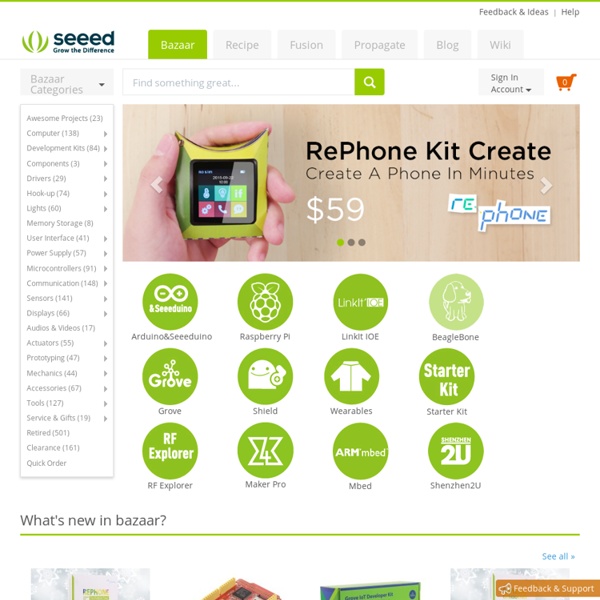 Notes: Arduino-based logic analyser by follower - labradoc.com The process of getting an Arduino-based logic analyser working Download the current source from the repo: wget --no-check-certificate --content-disposition Should result in a file named something like gillham-logic_analyzer-c923ff1.zip. Then: unzip gillham-logic_analyzer-c923ff1.zip Install the OLS GUI application. Install the plugins as per the README file.i.e. copy the ols.profile-*.cfg files into the plugins directory.On OS X the plugins location should be: LogicSniffer.app/Contents/Resources/Java/plugins (Use the Finder context-menu option "Show Package Contents" if not using the command line.)

How-to: Bus Pirate v1, improved universal serial interface We use the Bus Pirate to interface a new chip without writing code or designing a PCB. Based on your feedback, and our experience using the original Bus Pirate to demonstrate various parts, we updated the design with new features and cheaper components. There’s also a firmware update for both Bus Pirate hardware versions, with bug fixes, and a PC AT keyboard decoder. Check out the new Hack a Day Bus Pirate page, and browse the Bus Pirate source code in our Google code SVN repository.

Online : LED cluster for Arduino testing My friend Usman and I are collaborating long-distance on an Arduino project. He’s a software guy (by which I mean he’s a guy actually made of software. OK, not really, but almost) and doesn’t have time right now to get up to speed on hardware. So, I send him bits of hardware as needed. This is how we did the RFID iConveyor project. Laser Cutting (Article) Laser cutters work their magic by focusing a high-powered laser onto a material. The beam is focused down to a point as small as one-thousandth of an inch and can burn, melt, or even vaporize the material it hits. What type of material can be cut depends on the strength of the laser. A 30 watt laser can cut paper, acrylic, and hardboard while a 10 Kilowatt laser can cut through stainless steel that's one inch thick.

OLS - alternative Java client Welcome to the project page of Logic Sniffer Java client. This page will provide some documentation and, of course, download links. Table of contents Introduction Bus Pirate From DP Bus Pirate v3.6 available now for $30.15, including worldwide shipping Bus Pirate v3.6 is also available at Adafruit Industries (USA) EpicTinker (USA) Watterott Electronic (Germany) Evola (Europe) Anibit (USA) Hackaday (USA) The Bus Pirate is an open source hacker multi-tool that talks to electronic stuff. A Multi-Protocol Infrared Remote Library for the Arduino Do you want to control your Arduino with an IR remote? Do you want to use your Arduino to control your stereo or other devices? This IR remote library lets you both send and receive IR remote codes in multiple protocols. It supports NEC, Sony SIRC, Philips RC5, Philips RC6, and raw protocols.

How to Build a Robot Tutorials - Society of Robots What are microcontrollers? They are what their name suggests. Today they can be found in almost any complex electronic device - from portable music devices to washing machines to your car. RGBLED \ Learning This example is for Wiring version 1.0 build 0100+. If you have a previous version, use the examples included with your software. If you see any errors or have comments, please let us know. RGB LED by BARRAGAN Demonstrates the use of PWM pins (analog output) to change the color of an RGB LED.

SX PC and USB Logic Analyzer, Signal Generator, I2C, SPI, Async Protocol Decoder and Analyzer The USBee SX Digital Test Pod combines state of the art design with easy to use PC software to give you a complete digital test bench in a small and affordable package. Connecting to your PC, the USBee SX Digital Test Pod uses the power and speed of the USB 2.0 High-Speed bus to capture and control information from your own hardware designs. The USBee SX runs the following applications:

Raspberry Pi, mini computers, Android and microcontrollers General electronics Handling LCD displays via USB UART from your computer - How to control displays from computers via serial UART communications in PythonRemote programming of mini PC like Raspberry Pi or Beaglebone Black - How to use SSH, SSHFS and VNC/RDP to remotely programm and operate an mini PC from another PC. Micro Python and pyboard Micro Python and pyboard - a Python running on a microcontroller scripts your electronics - How doeas a Python works on a microcontroller and what features pyboard board can offer us? playground - ShiftBriteLib Overview Taken from macetech.com. ShiftBrite is a high-brightness LED module containing red, green, and blue elements. It uses a simple clocked serial interface to receive a 10-bit brightness value for each color, resulting in over a billion possible colors. Each input is buffered and output on the other side of the module.

2.4G Wireless nRF24L01+ Module 2.4G Wireless nRF24L01 Module [WIR001] - $5.50 : iStore, Make Innovation Easier As we mentioned before , IBOX can run various versions of operating systems, including linux and android , etc. Some guys are wondering about the differences between the operating system of FLASH version and SD card version, thus we’d like to give a simple reply here : Whether it is linux or Android, NAND FLASH version and the SD card version only differ in the installation position: one is installed in the NAND FLASH and another is installed in a Micro-SD card. System of SD card version cannot work in NAND FLASH, vice versa. Processing - MPU-9250 The MPU-9x50™ family of parts are the world’s first 9-axis MotionTracking devices designed for battery operated, high performance consumer electronics products. The 9-axis product family incorporates the same market proven MotionFusion™ and run-time calibration firmware that is supported in InvenSense’s market leading MPU-6000 and MPU-3000 family of products. This firmware has shipped in millions of units and has been very well market validated. 9-Axis MotionTracking has become a key function in many consumer electronics devices including smartphones, tablets, gaming consoles, and smart-TVs. The size advantage of the integrated 9 axis devices versus a discrete solution is compelling for space constrained products such as smartphones and wearable sensors.