NHS week: Nine in 10 hospitals 'overcrowded' this winter. Image copyright Press Eye The number of patients on hospital wards in England has been at unsafe levels at nine in 10 NHS trusts this winter, BBC analysis shows. 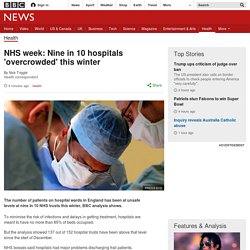 To minimise the risk of infections and delays in getting treatment, hospitals are meant to have no more than 85% of beds occupied. But the analysis showed 137 out of 152 hospital trusts have been above that level since the start of December. NHS bosses said hospitals had major problems discharging frail patients. They said a lack of care in the community meant they were having to keep patients on wards. A poll by Ipsos MORI for the BBC has suggested three-quarters of those surveyed in the UK want to see charges increased for people coming from abroad as a way of raising more money for the NHS. Meanwhile, it has been announced that from April this year, foreign patients could be refused operations unless they cover their costs in advance in England. Getty Images. Labour vows to close 'north-south divide' in public spending. Labour has promised to place a cap on the prices charged by energy companies if it wins power. 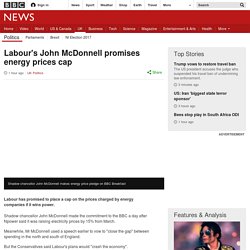 Shadow chancellor John McDonnell made the commitment to the BBC a day after Npower said it was raising electricity prices by 15% from March. Meanwhile, Mr McDonnell used a speech earlier to vow to "close the gap" between spending in the north and south of England. But the Conservatives said Labour's plans would "crash the economy". Npower said on Friday that its price rises would take effect on 16 March, with gas increasing by 4.8%. British American Tobacco takes control of Reynolds for $49bn. Image copyright Reuters British American Tobacco has agreed a $49.4bn (£40bn) deal to take control of US rival Reynolds, creating the world's largest listed tobacco firm. 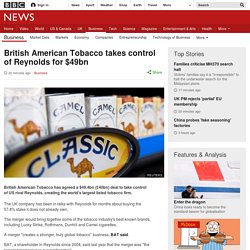 The UK company has been in talks with Reynolds for months about buying the 57.8% stake it does not already own. The merger would bring together some of the tobacco industry's best-known brands, including Lucky Strike, Rothmans, Dunhill and Camel cigarettes. A merger "creates a stronger, truly global tobacco" business, BAT said. Tesco Bank says attack cost it £2.5m and hit 9,000 people. Image copyright Getty Images Tesco Bank says it has refunded £2.5m to 9,000 customers who had money taken in an attack on their accounts. 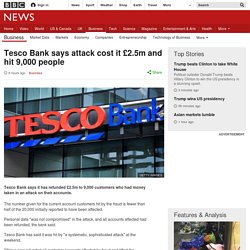 Coffee shops stir £7.9bn into market as café culture dominates. "When we started writing about the coffee market in 1999, we were told that the market had reached saturation – the mug is already full," said Jeffrey Young, MD of the Allegra Group, which delivers insights and events for the food and drink market. 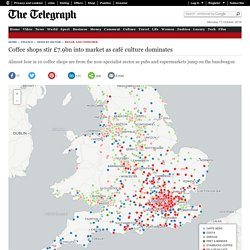 "Since then, when Starbucks had only just entered the UK and Costa had about 100 outlets, the market has grown sevenfold and could double over the next decade. " Watch the coffee shop growth from 2010 to 2015 The spread of branded coffee shops across the UK (data from Local Data Company) The non-specialist sector, from pubs to supermarkets, has also increased its emphasis on quality coffee in recent years as consumers' appetite for the beverage and for the relaxed, social environment of coffee shops has grown.

There are now close to 8,000 non-specialist outlets in the UK, accounting for 39pc of the total market, compared to branded coffee shops' 31pc and independent cafés' 30pc. "Britain is becoming a nation of coffee connoisseurs. Why your coffee could cost more. Warm weather subdues UK's September retail sales. Image copyright Getty Images Shoppers held off from stocking up in September, according to new retail data, which revealed weak sales of food, footwear and clothing. 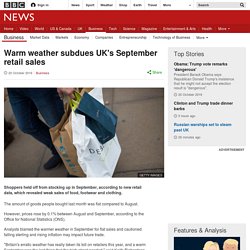 The amount of goods people bought last month was flat compared to August. However, prices rose by 0.1% between August and September, according to the Office for National Statistics (ONS). Analysts blamed the warmer weather in September for flat sales and cautioned falling sterling and rising inflation may impact future trade. "Britain's erratic weather has really taken its toll on retailers this year, and a warm September was the last thing that the high street needed," said Keith Richardson, managing director of the retail sector at Lloyds Bank Commercial Banking.

"Deflationary pressures in food and fashion also contributed to a flat spend during the month as a whole. " Over the three months to September, growth was stronger, with retail sales volumes up 1.8% compared with last year. World wine output expected to hit four-year low. Image copyright LOIC VENANCE World wine output is expected to hit a four-year low in 2016 after bad weather hit production in France and South America, industry forecasts say. 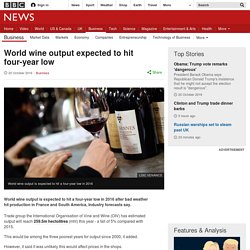 Trade group the International Organisation of Vine and Wine (OIV) has estimated output will reach 259.5m hectolitres (mhl) this year - a fall of 5% compared with 2015. This would be among the three poorest years for output since 2000, it added. However, it said it was unlikely this would affect prices in the shops. UK car firms 'want to be in EU single market'