BBC Micro. The BBC Microcomputer System, or BBC Micro, was a series of microcomputers and associated peripherals designed and built by the Acorn Computer company for the BBC Computer Literacy Project, operated by the British Broadcasting Corporation. 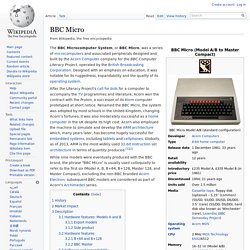 Designed with an emphasis on education, it was notable for its ruggedness, expandability and the quality of its operating system. After the Literacy Project's call for bids for a computer to accompany the TV programmes and literature, Acorn won the contract with the Proton, a successor of its Atom computer prototyped at short notice. Renamed the BBC Micro, the system was adopted by most schools in the United Kingdom, changing Acorn's fortunes. It was also moderately successful as a home computer in the UK despite its high cost. Acorn also employed the machine to simulate and develop the ARM architecture which, many years later, has become hugely successful for embedded systems, including tablets and cellphones. History[edit] The BBC Microcomputer and me, 30 years down the line. The tech industry is celebrating the 30th anniversary of the BBC Microcomputer. 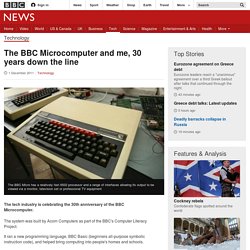 The system was built by Acorn Computers as part of the BBC's Computer Literacy Project. It ran a new programming language, BBC Basic (beginners all-purpose symbolic instruction code), and helped bring computing into people's homes and schools. However, trying to establish an "official" launch date is trickier than it sounds. Although the computers were demonstrated at trade exhibitions and reviewed in the press in 1981, a production snag pushed back deliveries.

A circuit, which controlled the "high definition" screen display, was found to have a higher than acceptable failure rate. A redesign was ordered and as a result only a few hundred computers out of a planned batch of 3,000 were ready in time for the start of The Computer Programme when the first episode was broadcast in January 1982. This initial hiccup proved far from fatal.

Mike Lynch, Co-founder of Autonomy Conrad Wolfram, Co-founder of Wolfram Research. Micro Bit. Micro Bit (also referred to as BBC Micro Bit, stylized as micro:bit) is an ARM-based embedded system designed by the BBC for use in computer education in the UK. 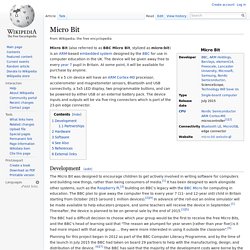 The device will be given away free to every year 7 pupil in Britain. At some point, it will be available for purchase by anyone. The 4 x 5 cm device will have an ARM Cortex-M0 processor, accelerometer and magnetometer sensors, Bluetooth and USB connectivity, a 5x5 LED display, two programmable buttons, and can be powered by either USB or an external battery pack. The device inputs and outputs will be via five ring connectors which is part of the 23-pin edge connector. Development[edit] The Micro Bit was designed to encourage children to get actively involved in writing software for computers and building new things, rather than being consumers of media.[1] It has been designed to work alongside other systems, such as the Raspberry Pi,[3] building on BBC's legacy with the BBC Micro for computing in education. 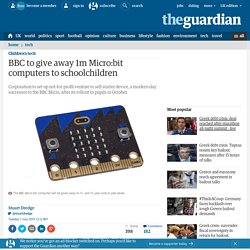 The computer was unveiled at an event in London on Tuesday, along with plans for its rollout this October, after the Micro:bit project was launched earlier this year as part of the corporation’s Make It Digital initiative. The BBC is working with 28 software and hardware partners on the project, which will see every year seven pupil in the country given one of the computers, and a not-for-profit body set up to sell them after that point.

“Creating the Micro:bit has been a brilliant collaborative adventure for all of us,” said BBC director-general Tony Hall. Micro Bit: hands-on with BBC's coding kit. Following this morning's announcement of the BBC's Micro Bit programmable computer, WIRED.co.uk takes a closer look at the new piece of technology, and speaks to one of the people behind its creation. 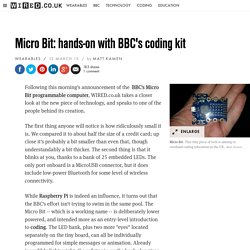 The first thing anyone will notice is how ridiculously small it is. We compared it to about half the size of a credit card; up close it's probably a bit smaller than even that, though understandably a bit thicker. The second thing is that it blinks at you, thanks to a bank of 25 embedded LEDs. The only port onboard is a MicroUSB connector, but it does include low-power Bluetooth for some level of wireless connectivity. While Raspberry Pi is indeed an influence, it turns out that the BBC's effort isn't trying to swim in the same pool. UK children to get BBC Micro Bit by Technology Will Save Us. Every 11-year-old child in the UK is to be given a programmable pocket-sized device designed by Technology Will Save Us to help them express their creativity through technology (+ slideshow). 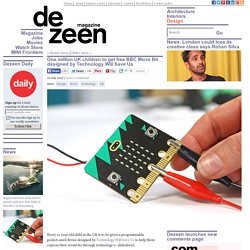 One million BBC Micro Bit devices, which are about the size of a credit card, will be distributed via schools around the country. Bethany Koby, founder and CEO of London collective Technology Will Save Us, told Dezeen that the devices were intended to make programming relevant to children. "We want to be able inspire an 11-year-old girl who's into One Direction to learn technology skills that are going to be exciting, useful and related to her interests, and at the same time even teach her what an accelerometer is," she said. "If you think about how technology education is positioned right now for an 11-year-old, they have to take ICT [Information and Communications Technology], where basically they learn how to make Excel spreadsheets.

That's not technology. " Technology Will Save Us archives. BBC Blogs - About the BBC - Teachers and the micro:bit. BBC micro:bit will change the way we learn about computing. The way computing is taught in schools is going through its greatest upheaval since the subject was first introduced at the turn of the century. 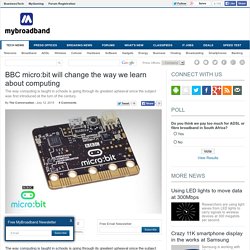 After considerable lobbying by the industry, professional societies, universities and schools, the national curriculum has been re-oriented towards establishing computing as the “fourth science” for schools. Out go interminable lessons on how to use specific word processor or spreadsheet applications. In comes more rigorous teaching about the scientific principles of technology and how to put it to use creatively – to be taught, importantly, by example rather than by rote.

Plugged in to this change of tack is the recently announced BBC micro:bit, a tiny, inexpensive pocket-sized computing device. The BBC plans to give away a million of these devices free to every Year 7 child (11 to 12-year-old) in the country this autumn, to encourage children to become a generation of digital creators. The BBC Microcomputer and me, 30 years down the line.