Pigpio library. Pigpio is a library for the Raspberry which allows control of the General Purpose Input Outputs (GPIO). pigpio works on all versions of the Pi. 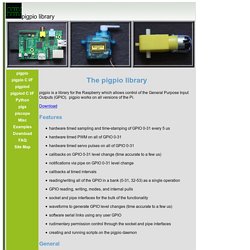 Download Features hardware timed sampling and time-stamping of GPIO 0-31 every 5 ushardware timed PWM on all of GPIO 0-31hardware timed servo pulses on all of GPIO 0-31callbacks on GPIO 0-31 level change (time accurate to a few us)notifications via pipe on GPIO 0-31 level changecallbacks at timed intervalsreading/writing all of the GPIO in a bank (0-31, 32-53) as a single operationGPIO reading, writing, modes, and internal pullssocket and pipe interfaces for the bulk of the functionalitywaveforms to generate GPIO level changes (time accurate to a few us)software serial links using any user GPIOrudimentary permission control through the socket and pipe interfacescreating and running scripts on the pigpio daemon General.

Not famous yet sbc's. Ntablet: A tablet that comes with an interchangeable processor and that should also appeal to Raspberry Pi hobbyists. Make: DIY Projects and Ideas for Makers. Gigabyte Single Board PC Is Like Raspberry Pi On Steroids With Quad-Core Intel CPU And Dual LAN. There's no shortage of options in the DIY micro-PC market, one that Raspberry Pi arguably spearheaded over five-years-ago with the release of its first unit. 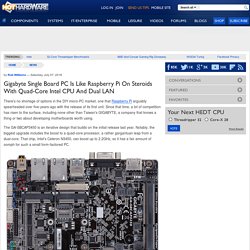 Since that time, a lot of competition has risen to the surface, including none other than Taiwan's GIGABYTE, a company that knows a thing or two about developing motherboards worth using. The GA-SBCAP3450 is an iterative design that builds on the initial release last year. 10 Best Raspberry Pi 3 Alternatives You Can Buy (2017) 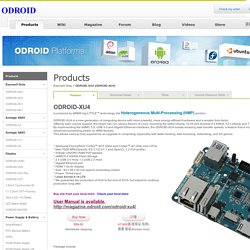 Mali-T628 is the GPU of choice for use in the next generation of market-leading devices, optimized to bring breathtaking graphical displays to consumer applications such as 3D graphics, visual computing, augmented reality, procedural texture generation and voice recognition. You can download the full featured OpenGL ES and OpenCL SDK from ARM Mali Developer website. It's free! AVR microcontroller lectures 2012. 10 DIY Development Boards for IoT Prototyping. Makers and hackers getting started with connected devices and the Internet of Things (IoT) have many choices of development boards. 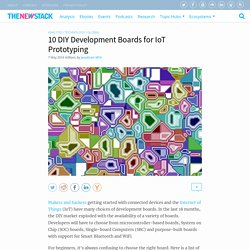 In the last 18 months, the DIY market exploded with the availability of a variety of boards. Developers will have to choose from microcontroller-based boards, System on Chip (SOC) boards, Single-board Computers (SBC) and purpose-built boards with support for Smart Bluetooth and WiFi. For beginners, it’s always confusing to choose the right board. Here is a list of 10 development boards that are ideal for your first IoT project. 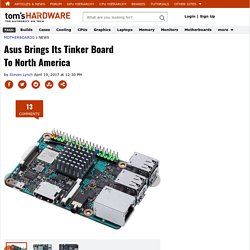 Sensors. Raspberry Pi, mini computers, Android and microcontrollers. General electronics Handling LCD displays via USB UART from your computer - How to control displays from computers via serial UART communications in PythonRemote programming of mini PC like Raspberry Pi or Beaglebone Black - How to use SSH, SSHFS and VNC/RDP to remotely programm and operate an mini PC from another PC. 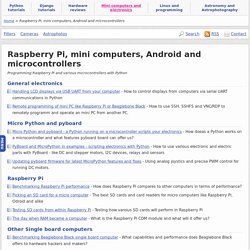 Micro Python and pyboard Micro Python and pyboard - a Python running on a microcontroller scripts your electronics - How doeas a Python works on a microcontroller and what features pyboard board can offer us? PyBoard and MicroPython in examples - scripting electronics with Python - How to use various electronic and electric parts with PyBoard - like DC and stepper motors, I2C devices, relays and sensorsUpdating pyboard firmware for latest MicroPython features and fixes - Using analog joystics and precise PWM control for running DC motors. All-You-Need Mini PC Android + Linux + Arduino.

Category : Development Tools. Acme Systems srl - Linux Embedded CPU modules. Windows Tools for the Electrical Engineer. An I2C Tutorial. This I2C tutorial shows you how the I2C protocol works at the physical bit level discussing single master mode (a single controlling device) which is the most common use for I2C in a small system. 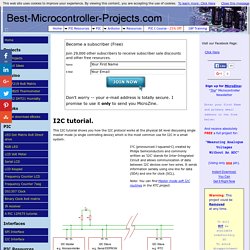 I²C (pronounced I-squared-C) created by Philips Semiconductors and commonly written as 'I2C' stands for Inter-Integrated Circuit and allows communication of data between I2C devices over two wires. It sends information serially using one line for data (SDA) and one for clock (SCL). Note: You can find Master mode soft I2C routines in the RTC project. Master and slave The phillips I2C protocol defines the concept of master and slave devices.

Parts. How-to: Bus Pirate v1, improved universal serial interface. We use the Bus Pirate to interface a new chip without writing code or designing a PCB. 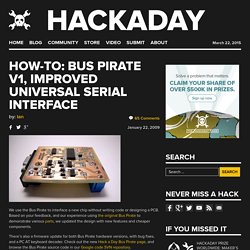 Based on your feedback, and our experience using the original Bus Pirate to demonstrate various parts, we updated the design with new features and cheaper components. There’s also a firmware update for both Bus Pirate hardware versions, with bug fixes, and a PC AT keyboard decoder. Check out the new Hack a Day Bus Pirate page, and browse the Bus Pirate source code in our Google code SVN repository. We cover the design updates and interface a digital to analog converter below. Concept overview. Bus Pirate. From DP Bus Pirate v3.6 available now for $30.15, including worldwide shipping Bus Pirate v3.6 is also available at Adafruit Industries (USA) EpicTinker (USA) Watterott Electronic (Germany) Evola (Europe) Anibit (USA) Hackaday (USA) The Bus Pirate is an open source hacker multi-tool that talks to electronic stuff. 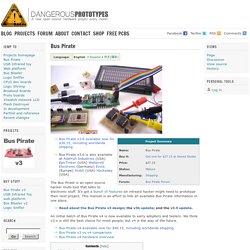 It's got a bunch of features an intrepid hacker might need to prototype their next project. This manual is an effort to link all available Bus Pirate information in one place. Read about the Bus Pirate v3 design; the v3b update; and the v3.5 update. An initial batch of Bus Pirate v4 is now available to early adopters and testers. Introduction Features Features overview (original) Hardware Tutorials Forums Bus Pirate forums Linux, OS X Download Although the primary target of community is to significantly improve the user experience for Bus Pirate v4, the Bus Pirate v3 support will be maintained at all costs (despite the difficulties while compiling with the recent MPLAB XC16 compilers) 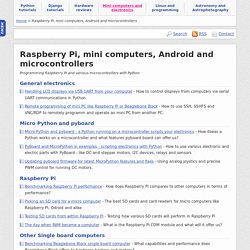 Raspberry stuff. Software Selection - Getting Started. Software Selection Most hobbyist and commercial users, as well as some educational users, program the PICAXE chip using the easy to learn BASIC language. This language is designed to allow users without any formal programming experience to be able to quickly and simply develop PICAXE microcontroller programs. PICAXE BASIC is much simpler to learn (and to 'debug') than traditional microcontroller languages such as assembler code or 'C'. The software for BASIC programming is completely free and available for Windows, Mac and Linux.

What I was looking for and couldn’t find was a comprehensive article that would summarize all of the pros and cons of the Raspberry Pi and the BeagleBone Black, and what each platform is best suited for. When I couldn’t find that article, I decided to write it myself.

MIDIsense. This photo has notes. Move your mouse over the photo to see them. MIDIsense is a simple, yet extensible sensor interface system for artists, musicians and others interested in experimenting with sensors. The MIDIsense boards provide a simple way to integrate various common sensors with existing software such as Max/MSP, Ableton Live, etc. or directly to a synthesizer/sequencer with a MIDI in jack.