Sk-8855 with trackpoint usb keyboard sound. ThinkPad USB Keyboard with TrackPoint. IBM introduces "Pointing Stick" (TrackPoint) (1990) Arduino PS2 to USB Keyboard. My April Fools joke hit a roadblock when I discovered that my coworker was using an old PS2 keyboard rather than a USB one. 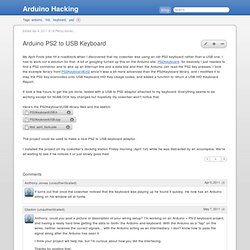 I had to work out a solution for that. A bit of googling turned up this on the Arduino site: PS2Keyboard. So basically I just needed to find a PS2 connector and to wire up an interrupt line and a data line and then the Arduino can read the PS2 key presses. I took the example library from PS2KeyboardExt2 since it was a bit more advanced than the PS2Keyboard library, and I modified it to map the PS2 key scancodes onto USB Keyboard HID Key Usage codes, and added a function to return a USB HID Keyboard Report. It took a few hours to get the job done, tested with a USB to PS2 adaptor attached to my keyboard. Here's the PS2KeyboardUSB library files and the sketch: The project could be used to make a nice PS2 to USB keyboard adaptor. I installed the project on my coworker's docking station Friday morning (April 1st) while he was distracted by an accomplice. 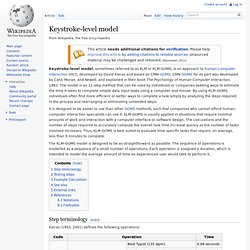 CMN-GOMS for its part was developed by Card, Moran, and Newell, and explained in their book The Psychology of Human-Computer Interaction, 1983. The model is an 11-step method that can be used by individuals or companies seeking ways to estimate the time it takes to complete simple data input tasks using a computer and mouse. By using KLM-GOMS, individuals often find more efficient or better ways to complete a task simply by analyzing the steps required in the process and rearranging or eliminating unneeded steps. It is designed to be easier to use than other GOMS methods, such that companies who cannot afford human–computer interaction specialists can use it. KLM-GOMS is usually applied in situations that require minimal amounts of work and interaction with a computer interface or software design. Step terminology[edit] Interfacing laptop keyboard matrix with Leonardo. Hello, So I've got a bit of a tricky one. 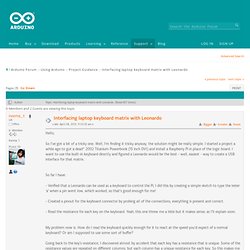 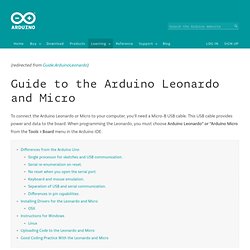 This USB cable provides power and data to the board. When programming the Leonardo, you must choose Arduino Leonardo" or "Arduino Micro from the Tools > Board menu in the Arduino IDE. Differences from the Arduino Uno In general, you program and use the Leonardo and Micro as you would other Arduino boards. MouseKeyboard. Reference Language | Libraries | Comparison | Changes These core libraries allow an Arduino Leonardo, Micro, or Due board to appear as a native Mouse and/or Keyboard to a connected computer. 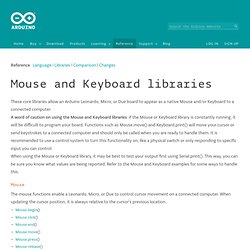 A word of caution on using the Mouse and Keyboard libraries: if the Mouse or Keyboard library is constantly running, it will be difficult to program your board. Functions such as Mouse.move() and Keyboard.print() will move your cursor or send keystrokes to a connected computer and should only be called when you are ready to handle them. Keyboard/mouse controller for ThinkPad X41 keyboard. Keyboard/mouse controller for ThinkPad X41 keyboard congIA: Hey guys, I'm working on a nearly exactly the same project: to make a USB adapter for my Thinkpad T60. 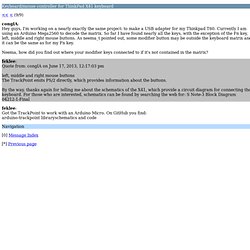 Currently I am using an Arduino Mega2560 to decode the matrix. So far I have found nearly all the keys, with the exception of the Fn key, left, middle and right mouse buttons. As neema_t pointed out, some modifier button may be outside the keyboard matrix and it can be the same as for my Fn key. Neema, how did you find out where your modifier keys connected to if it's not contained in the matrix? Feklee: Quote from: congIA on June 17, 2013, 12:17:03 pm left, middle and right mouse buttonsThe TrackPoint emits PS/2 directly, which provides information about the buttons.

By the way, thanks again for telling me about the schematics of the X41, which provide a circuit diagram for connecting the keyboard. S Note-3 Block Diagram 04212-1-Final. SC1000P50V datasheet. CHP222 datasheet. LeonardoMicro. To connect the Arduino Leonardo or Micro to your computer, you'll need a Micro-B USB cable. 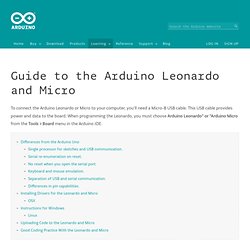 This USB cable provides power and data to the board. When programming the Leonardo, you must choose Arduino Leonardo" or "Arduino Micro from the Tools > Board menu in the Arduino IDE. Differences from the Arduino Uno In general, you program and use the Leonardo and Micro as you would other Arduino boards. There are, however, a few important differences. Single processor for sketches and USB communication. The Leonardo and Micro differ from other Arduino boards in that they use a single microcontroller to both run your sketches and for USB communication with the computer. Serial re-enumeration on reset. Since the boards do not have a dedicated chip to handle serial communication, it means that the serial port is virtual -- it's a software routine, both on your operating system, and on the board itself.