Identify a Lie with 6 Simple Questions 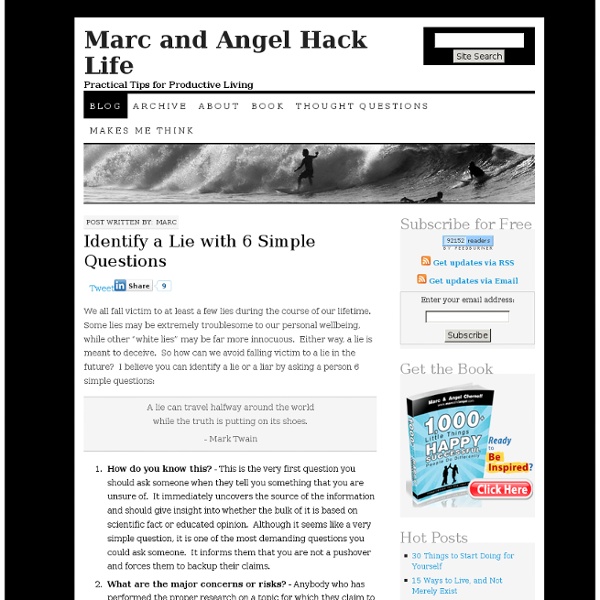 post written by: Marc Chernoff Email We all fall victim to at least a few lies during the course of our lifetime. Some lies may be extremely troublesome to our personal wellbeing, while other “white lies” may be far more innocuous. Either way, a lie is meant to deceive. So how can we avoid falling victim to a lie in the future? A lie can travel halfway around the world while the truth is putting on its shoes.- Mark Twain How do you know this? If you enjoyed this article, check out our new best-selling book. And get inspiring life tips and quotes in your inbox (it's free)...

Visual thinking school Visual thinking is a way to organize your thoughts and improve your ability to think and communicate. It’s a way to expand your range and capacity by going beyond the linear world of the written word, list and spreadsheet, and entering the non-linear world of complex spacial relationships, networks, maps and diagrams. It’s also about using tools — like pen and paper, index cards and software tools — to externalize your internal thinking processes, making them more clear, explicit and actionable. Why is visual thinking important? There’s more information at your fingertips than ever before, and yet people are overwhelmed by it.

60 Small Ways to Improve Your Life in the Next 100 Days Contrary to popular belief, you don’t have to make drastic changes in order to notice an improvement in the quality of your life. At the same time, you don’t need to wait a long time in order to see the measurable results that come from taking positive action. All you have to do is take small steps, and take them consistently, for a period of 100 days.

Common Science Myths That Most People Believe There are a number of old wives’ tales out there regarding some basic scientific principles. Though most of them were refuted years ago, these rumors just won’t go away. Here are some of the top myths floating around out there that just aren’t true: We only use 10% of our brains. It's true that there’s a great deal we don’t know about the brain, but we certainly do know that we use our entire brain.

5 Psychological Experiments That Prove Humanity is Doomed Cracked.com's new book is now on sale. What follows is one of 22 classic articles that appear in the book, along with 18 new articles that you can't read anywhere else. Psychologists know you have to be careful when you go poking around the human mind because you're never sure what you'll find there. A number of psychological experiments over the years have yielded terrifying conclusions about the subjects. Oh, we're not talking about the occasional psychopath who turns up. No, we're talking about you. How to verify photos and videos on social media networks This image was mistakenly broadcast by one of France’s largest TV channels, France 2. The scene was described as having unfolded in Iran, back in December 2009. A cursory glance reveals a range of details that could allow us to verify its authenticity.

Time on the Brain: How You Are Always Living In the Past, and Other Quirks of Perception I always knew we humans have a rather tenuous grip on the concept of time, but I never realized quite how tenuous it was until a couple of weeks ago, when I attended a conference on the nature of time organized by the Foundational Questions Institute. This meeting, even more than FQXi’s previous efforts, was a mashup of different disciplines: fundamental physics, philosophy, neuroscience, complexity theory. Crossing academic disciplines may be overrated, as physicist-blogger Sabine Hossenfelder has pointed out, but it sure is fun. Like Sabine, I spend my days thinking about planets, dark matter, black holes—they have become mundane to me.

Mudras: The Healing Power in your Hands “In this respect, Kundalini Yoga assumes that every area of the hand forms a reflex zone for an associated part of the body and the brain. In this way, we can consider the hands to be a mirror for our body and our mind” -Lothar Rüdiger Lütge, Kundalini yoga expert Practiced since antiquity in combination with pranayama, asanas and meditation, Mudras or Hand Gestures is a practice to improve your physical, mental and spiritual well-being. Our hands define our karma and fingers being the power points, are a link between individual Pranic force and universal cosmic energy. The subtle hand and finger movements make important connections in the nervous system and stimulate specific energy pathways or nadis. Human body is an amalgamation of 5 elements of nature – Earth, Air, Water, Space and Fire & each finger acts as a representative of one element.

Critical thinking web To begin our study of predicate logic, we start with the concept of a singular term. A singular term in a natural language is a linguistic expression that has the function of referring to or naming a particular object or thing. For our present purpose we shall take singular terms to include : Russian Sexy Twins Age: 21 years Height: 172 cm Anna – Russian Cup winner in karate-do Rengokai (2008) winners of the tournament in karate (2006), IMR, a black belt Olga – the tournament winner of the International League of Martial Arts (2007), Silver medalist Cup of Russia on karate-Rengokai (2009), IMR, a black belt From the August issue of MH you might learn that having sex with twins among the five most common male sexual fantasies, but sexologists in one voice hard – you will not wait. We will not rest until you have checked it themselves have twins. Alas, all true.

6 Best Fact Checking Websites That Help You Distinguish Between Truth and Rumors The Internet has been called “The Information Super Highway” and rightly so. It’s now the epicenter of breaking news and the free flowing information has brought the world and the people closer and made us aware of other cultures and traditions. But all this comes with a flipside. The amount of misinformation that is spread on the web is staggering. It is spread mainly via Websites, Social Networks, and Email. The Hot Topics for such misinformation are Politics, Government Policies, Religion and various Scams and Hoaxes. How can I improve my short term memory? Q: How can I improve my mem­ory? Is there a daily exer­cise I can do to improve it? A: The most impor­tant com­po­nent of mem­ory is atten­tion. By choos­ing to attend to some­thing and focus on it, you cre­ate a per­sonal inter­ac­tion with it, which gives it per­sonal mean­ing, mak­ing it eas­ier to remember. Elab­o­ra­tion and rep­e­ti­tion are the most com­mon ways of cre­at­ing that per­sonal inter­ac­tion.