Debunking the Real 9/11 Myths: Why Popular Mechanics Can't Face Up to Reality. Reply to Popular Mechanics re 9/11. Some people, who suppose themselves to be both "intelligent" and "rational", dismiss any denial of the official story of September 11th as "conspiracy theory". 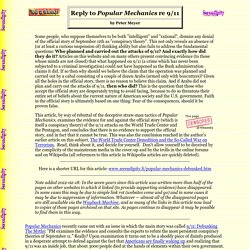 This not only reveals an absence of (or at least a curious suspension of) thinking ability but also fails to address the fundamental questions: Who planned and carried out the attacks of 9/11? And exactly how did they do it? Articles on this website and on many others present convincing evidence (to those whose minds are not closed) that what happened on 9/11 (a crime which has never been subjected to a criminal investigation) could not have happened as the Bush administration claims it did. Reply to Popular Mechanics re 9/11. Popular Mechanics Attacks the "9/11 LIES" Straw Man. The Hearst-owned Popular Mechanics magazine takes aim at the 9/11 Truth Movement (without ever acknowledging it by that name) with a cover story in its March 2005 edition. 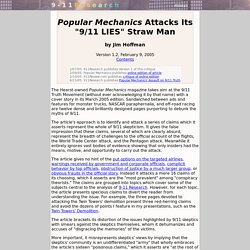 Sandwiched between ads and features for monster trucks, NASCAR paraphernalia, and off-road racing are twelve dense and brilliantly designed pages purporting to debunk the myths of 9/11. DEBUNKING POPULAR MECHANICS. Popular Mechanics is an American magazine, which was first published January 11, 1902 by H. 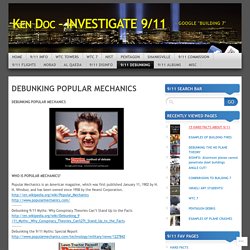 H. Former NIST Employee Speaks Out, Says Building 7 Investigation Bogus, Govt 'Denied Evidence' A former employee of the National Institute of Standards and Technology (NIST) has stepped forward and criticized the government agency for ignoring the scientific errors found in its report on the collapse of World Trade Center Building 7 (WTC 7) during the September 11, 2001, attacks. 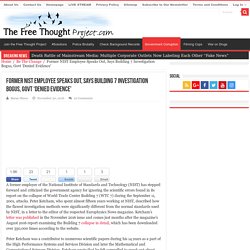 Peter Ketcham, who spent almost fifteen years working at NIST, described how the flawed investigation methods were significantly different from the normal standards used by NIST, in a letter to the editor of the respected Europhysics News magazine. Ketcham’s letter was published in the November 2016 issue and comes just months after the magazine’s August 2016 report examining the Building 7 collapse in detail, which has been downloaded over 350,000 times according to the website. Peter Ketcham was a contributor to numerous scientific papers during his 14 years as a part of the High Performance Systems and Services Division and later the Mathematical and Computational Sciences Division.

Architects & Engineers Investigating the destruction of all three World Trade Center skyscrapers on September 11 - Fraud Exposed in NIST WTC 7 Reports — Part 2 of 5. NIST heated the floor beams, but not the slab. 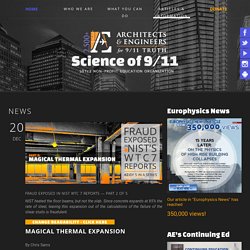 Since concrete expands at 85% the rate of steel, leaving this expansion out of the calculations of the failure of the shear studs is fraudulent. By Chris Sarns Chris Sarns Part 1 of Chris Sarns’ report, regarding the burned-out fire in WTC 7, is available here. Part 2 (below) was originally published on June 10, 2013. NOTE: Quotes from NIST's WTC 7 reports are shown in Bold Light Blue. NIST used numerous unscientific methods and fraudulent inputs to get the key girder to fail in its computer simulation.

Former NIST Employee Speaks Out, Says Building 7 Investigation Bogus, Govt 'Denied Evidence' Jonathan Elinoff and the Origin of the "Gelatin" German/Austrian WTC Art Student Hoax Story. Debunking 9/11 Conspiracy Theories and Controlled Demolition - Free Fall. The time required to strip off a floor, according to Frank Greening, is a maximum of about 110 milliseconds = 0.110 seconds. 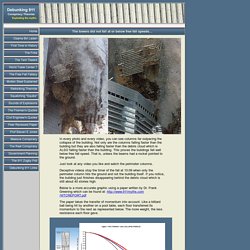 It is rather the conservation of momentum that slowed the collapse together with a small additional time for the destruction of each floor. Below are calculations from a physics blogger... When I did the calculations, what I got for a thousand feet was about nine seconds- let's see,d = 1/2at^2sot = (2d/a)^1/2a is 9.8m/s^2 (acceleration of gravity at Earth's surface, according to Wikipedia), [He gives this reference so you can double check him.]d is 417m (height of the World Trade Center towers, same source)so t = (834m/9.8m/s^2)^1/2 = 9.23sOK, so how fast was it going?

Easy enough, v = atv = (9.8m/s^2 x 9.23s) = 90.4m/sSo in the following second, it would have fallen about another hundred meters. Ex-CIA Director: White House Ignored Months of Warnings About 9/11 to Avoid Leaving 'Paper Trail' of Culpability. In an explosive revelation during an interview with Politico, the former CIA director during President George W. 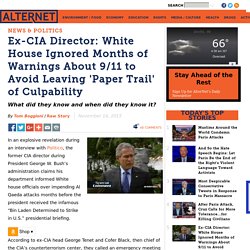 Bush’s administration claims his department informed White house officials over impending Al Qaeda attacks months before the president received the infamous “Bin Laden Determined to Strike in U.S.” presidential briefing. Shop ▾ According to ex-CIA head George Tenet and Cofer Black, then chief of the CIA’s counterterrorism center, they called an emergency meeting with National Security Adviser Condoleezza Rice on July 10 of 2001 saying they had evidence that an attack on the U.S. was imminent and that it would be “spectacular.” Beginning in May of 2001, Tenet and Black launched an initiative called “the Blue Sky paper” and pitched it to Bush’s national security team. The CIA called for a joint CIA and military campaign to end the Al Qaeda threat by “getting into the Afghan sanctuary, launching a paramilitary operation, creating a bridge with Uzbekistan.” “Yeah. Purdue Simulation: Full of Hot Air. The newest volley in the disinformation campaign regarding 9/11 is a simulation of the Twin Towers created by Purdue University. 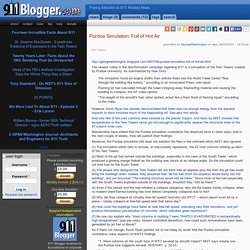 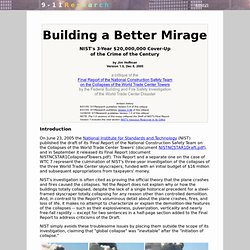 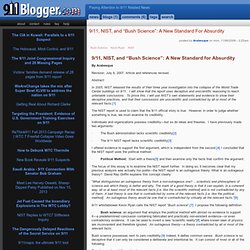 Article and references revised. Abstract: Former Senator Bob Graham Uncovers FBI Coverup, 9/11 Documents. Former Florida Senator Bob Graham continues to fight and raise awareness about censored 9/11 pages, and he spoke with Joshua Cook in an exclusive interview. "This has been a major source of frustration and anger for me. Back in 2002, I co-chaired the congressional inquiry into 9/11. We produced, after more than a year of research, hearings, interviews, reading thousands of documents, a report of over 800 pages," explained Graham. Saudi Arabia’s Alleged Involvement in the 9/11 Attacks. “Red-Herring”, Propaganda Ploy. BBC live report of the collapse of WTC building 7, more than minutes before the collapse took place. Building Seven in the background is still intact.