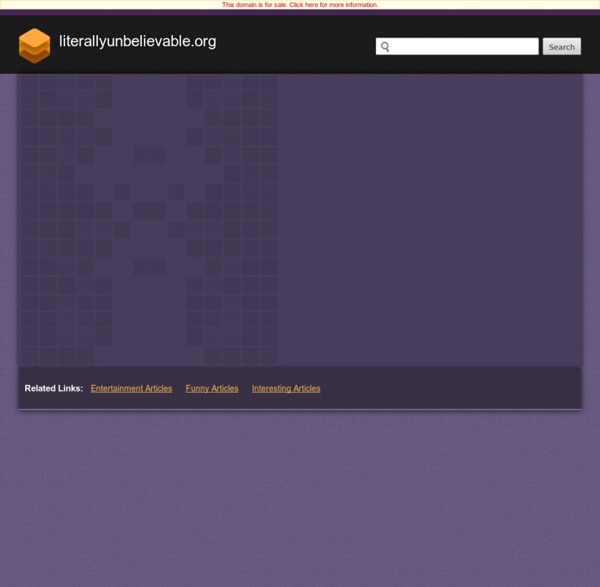 MapCrunch - Random Google Street View The Panda's Thumb EPIC FAIL .COM : #1 Source for Epic Fail and Fail Pictures, Fail Videos, and Fail Stories Cool Pix Week 34 was mostly about the impending victory for the rebels in Libya, but also about an earthquake in Washingon D.C., victims returning to the island of Utoeya and several sporting events. Join TotallyCoolPix on Facebook and Twitter or join our Flickr Group. 1 School children perform Poorna Bhujangasana, a form of yoga meant to make the spine flexible, at a yoga camp inside a college in the northern Indian city of Chandigarh August 19, 2011. More than 100 students participated. REUTERS/Ajay Verma 2 Members of an international religious movement called the White Brotherhood perform a ritual dance near Babreka lake, in Rila Mountain, some 100 km (62 miles) south of Sofia, August 19, 2011, as part of celebration of their New Year. 3 A geiger counter is placed in front of sunflowers in full bloom in Fukushima, northern Japan August 6, 2011. 4 U.S. 13 A boy climbs on a window railing along a street, during a heavy downpour in Havana August 19, 2011.

18 Images You Won't Believe Aren't Photoshopped (Part 9) As we've demonstrated many times before in our most popular feature on Cracked, the forces of the universe love the sound of people shouting "Fake!" at their computer screens, and photographers love to capture the proof. In case you missed the previous episodes, here's Part 1, Part 2, Part 3, Part 4, Part 5, the gritty reboot that doesn't acknowledge the previous editions, Part 6, Part 7 and Part 8. And now ... #18. Church of the Flying Spaghetti MonsterAnother normal day at Innsmouth Beach. It looks like three surfers are about to be devoured by a Lovecraftian sea monster or a horde of giant octopi. Actually, that's just what a wave looks like when it's full of sunlight and enough seaweed to choke a sperm whale, and it's not all that uncommon. #17. Geekologie What looks like a screen cap from a CGI-heavy Super Bowl commercial is actually a real, not-manipulated photograph. Telegraph.co.ukSeen here, reeling in a 300-pound marlin. #16. #15. TopTenz.net #14. Bleacher Report #13. #12. #11. #10.

Polite Dissent confirmshaming I’m not interested in celebrity friendships. I’d Rather Stay Uninformed don’t even bother capitalising the i Guys, I’m reading this site from a parked Plymouth Reliant. How to Easily Watch Netflix and Hulu From Anywhere in the World Ever wanted to access an online web service, only to find it’s only available to those people living in the United States? Read on to find out how you can get around this restriction by changing one simple setting in Windows. Changing Your DNS Settings Press the Win + R keyboard combination, then type ncpa.cpl into the run box and hit enter. Then right-click on your current network adapter and choose properties from the context menu. When the properties dialog opens, scroll down and choose Internet Protocol Version 4 (TCP/IPv4), then click the properties button. Then change your DNS Settings to the following IP’s: Preferred DNS: 149.154.158.186Alternate DNS: 199.167.30.144 Click OK, and then browse away. When you are done browsing the restricted sites, you should change your DNS settings back to what they were before you changed them. The DNS Server IPs come from the fantastic folk over at Tunlr.

ZooBorns Last April, Five Sisters Zoo in Scotland was damaged by a terrible fire that not only destroyed their tropical house and 48 different species of small mammals and reptiles, but also the indoor meerkat house, killing 11 members of their meerkat family. At the beginning of November, keepers saw two meerkat kits emerge from the burrow – a true sign that the remaining meerkat pair had fully recovered from their trauma. November in Scotland was not an ideal time to have young, but they are such resilient creatures that the babies have thrived ever since. Two weeks ago, two more kits emerged from the burrow, much to the delight of all the staff at the zoo! Photo credit: Five Sisters Zoo / Lesley Coupar Before the two additional kits made their appearance, a FaceBook appeal for name ideas generated hundreds of suggestions. A new home for the meerkat family is nearly complete. For more photos, see our story about the first two kits.