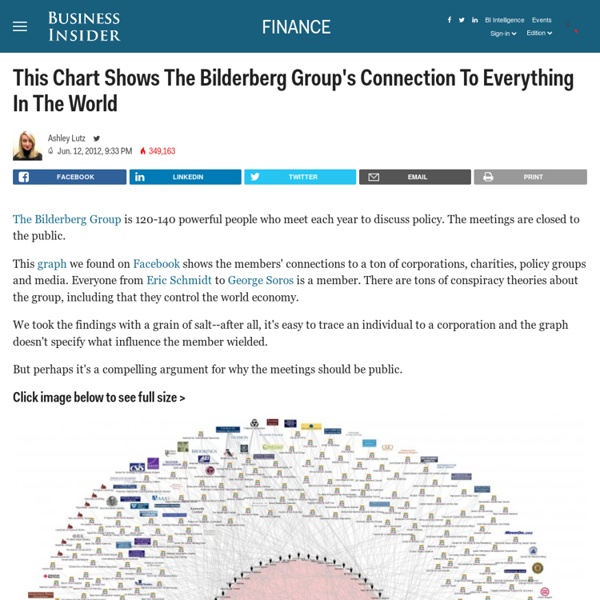 Bernie Sanders Could Replace President Trump With Little Known Loophole | The Huffington Post StAR - Stolen Asset Recovery Initiative - The Puppet Masters: How the Corrupt Use Legal Structures to Hide Stolen Assets and What to Do About It Billions in corrupt assets, complex money trails, shell companies and other spurious legal structures. These form the complex web of subterfuge in corruption cases, behind which hides the Puppet Master and beneficiary of it all. Linking the beneficial owner to the proceeds of corruption is difficult. With sizable wealth and resources, the corrupt stay ahead of the game by exploiting transnational constructions that are hard to penetrate. Indeed, nearly all cases of grand corruption have one thing in common. They rely on corporate vehicles- legal structures such as companies, foundations and trusts - to conceal ownership and control of tainted assets. The Puppet Masters takes corporate vehicles as its angle of investigation.

Food Inc documentary - Watch documentaries online for free at Documentary Addict One of the best food documentaries available. Food Inc explores the fact that the way we eat has changed more in the last 50 years, than in the previous 10 thousand. But the image that's used to sell the food, it is still the imagery of Agrarian America. You go into the supermarket and you see pictures of farmers,The picket fence and the silo and the 30's farmhouse and the green grass,it's the spinning of this pastral fantasy. The modern american supermarket has on average 47,000 products. There are no seasons in the american supermarket, now there are tomatoes all year around, grown half way around the world,picked when it was green and ripened with ethylene gas. In the meat aisle there are no bones anymore, There is this deliberate veil, this curtain that's dropped between us and where our food is coming from. For most Americans, the ideal meal is fast, cheap, and tasty.

Adam Parfrey: 7 Fascinating Secret Society Photos (PHOTOS) Just about every single village, town and city in the United States has at least several buildings used as secret society lodges, hidden in plain sight: various forms of Freemasonry, Odd Fellows, Shriners, Woodmen of the World, Improved Order of the Red Men, Jesters, Druids, subordinate orders meant for women or children of these groups--Rebekah, Order of the Eastern Star, Job's Daughters, DeMolay or one of six hundred different orders that ran strong in this country. It might come as a surprise that the banal business and patriot groups, like the Lion's, Optimists, Elks, Eagles, and the Rotary Club are also secret societies who are joined by initiates who swear secret oaths. At the turn of the twentieth century, several well-regarded insider books on fraternal orders claimed that as many as one-third the population of the country belonged to among six hundred different secret orders. What's the attraction of belonging to such groups? Various Masonic police badges

How to spot a fake Facebook page during a breaking news situation This is fake. Screenshot/Facebook. When the gunman of a mass shooting is named, the Internet rushes to find that person’s digital footprint. On Sunday, those looking for Baton Rouge gunman Gavin Long’s Facebook profile instead found — and by the hundreds, shared — a badly faked account. The Facebook page for “Gavin Long” had a grand total of three Facebook posts, two of which were edited to make it appear as though they were posted months ago. [The latest on the Baton Rouge shooting] One post, backdated to appear as if it had been written on July 9, read, “cops hunt us on the daily smh. evil scum,” and linked to a Daily Beast story about Alton Sterling, who was fatally shot by Baton Rouge police. Although it may appear as though the nearly viral post was created earlier this month, Facebook tells you when someone has backdated a post. (Screen shot from Facebook) Other reasons the profile is an obvious fake? (Screen shot from Facebook) lifestyle the-intersect true Intersect newsletter

Middle East Water CHAPTER XX: Middle East Water The Geopolitics of Middle Eastern Water The squabbles between States in Western North America, and between water authorities, seem small-scale compared to the the struggles between nations for control of water resources. Sometimes the fate of a nation has depended on secure control of its water supply. The most important resource in the Middle East may be water, not oil. Controlling the Euphrates. But since it rises and has a long upper course in the mountains of Anatolia, the control of its upper reaches has become a question of great strategic importance in the region. Southern Iraq has been ruined by millenia of poorly engineered irrigation. In 1992, Iraq began building the "Third River," a giant canal 550 km long from near Baghdad, toward the delta near Basra. By 1969 Iraq was using about 45% of the Euphrates water it received across the Syrian border, and now the percentage is greater still. The Nile and the Aswan Dam

Facebook admits it must do more to stop the spread of misinformation on its platform | TechCrunch Facebook has responded to widespread criticism of how its Newsfeed algorithm disseminates and amplifies misinformation in the wake of the Trump victory in the US presidential election yesterday. Multiple commentators were quick to point a finger of blame at Facebook’s role in the election campaign, arguing the tech giant has been hugely irresponsible given the role its platform now plays as a major media source, and specifically by enabling bogus stories to proliferate — many examples of which were seen to circulated in the Facebook Newsfeed during the campaign. Last week Buzzfeed reported on an entire cottage industry of web users in Macedonia generating fake news stories related to Trump vs Clinton in order to inject them into Facebook’s Newsfeed as a way to drive viral views and generate ad revenue from lucrative US eyeballs. That’s a pretty hefty economic incentive to game an algorithm. Here’s his statement in full: We take misinformation on Facebook very seriously.