What An ‘Active Shooter Drill’ Looks Like « Memory Hole. New breed of crisis actors: Fake political protesters. Re-published from Fellowship of the Minds. 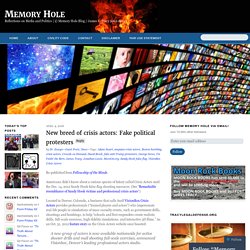 Americans didn’t know about a curious species of fakery called Crisis Actors until the Dec. 14, 2012 Sandy Hook false-flag shooting massacre. Remarkable resemblance of Sandy Hook victims and professional crisis actors. This is a follow-up on the post our lowtechgrannie did on January 7, 2013, “Crisis Actor Photos.” 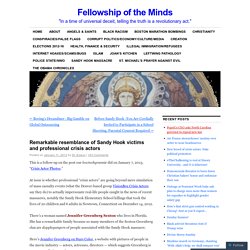 At issue is whether professional “crisis actors” are going beyond mere simulation of mass casualty events (what the Denver-based group VisionBox Crisis Actors say they do) to actually impersonate real-life people caught in the news of recent massacres, notably the Sandy Hook Elementary School killings that took the lives of 20 children and 6 adults in Newtown, Connecticut on December 14, 2012. There’s a woman named Jennifer Greenberg Sexton who lives in Florida. FEMA Hiring Actors to Run Live Terror Drills. Nevada Governor 2014 David Lory VanDerBeek. The next time you see FEMA or DHS running a terror drill in your city will you be able to tell the difference between the real bystanders and those paid by FEMA as crisis actors? 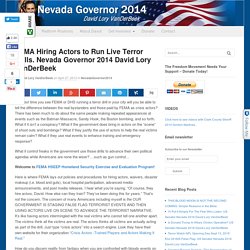 There has been much to do about the same people making repeated appearances at events such as the Batman Massacre, Sandy Hook, the Boston bombing, and so forth. What if it isn’t a conspiracy? What if the government does bring in actors on the “scene” of shoot outs and bombings? What if they justify the use of actors to help the real victims remain calm? What if they use real events to enhance training and emergency response? What if control freaks in the government use those drills to advance their own political agendas while Americans are none the wiser? Welcome to FEMA HSEEP Homeland Security Exercise and Evaluation Program! Book Review: Nobody Died at Sandy Hook (2015) It was a FEMA drill to promote gun control Edited by Jim Fetzer, PhD. 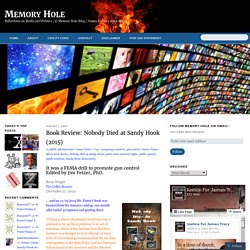 Brian WrightThe Coffee Roaster (November 27, 2015) … and on 11/19/2015 Mr. Fetzer’s book was banned from the Amazon catalog, one month after initial acceptance and posting there. “Faking a school shooting to instill fear into a population for political purposes is an act of terrorism, where it has become clear that this instance was brought to us by officials at every level of Connecticut government from the teachers and reporters to the State Police and the Newtown School board to the Governor and the Attorney General and the President himself. AND NOBODY DIED IN BOSTON, EITHER: State-sponsored terrorism with Hollywood special effects. A detailed investigation of the Boston marathon bombing that reveals that it, too, was another drill with Hollywood special effects, where none of the purported victims died and the two brothers, Tamerlan and Dzhokhar Tsarnaev, were framed for a crime they did not commit. 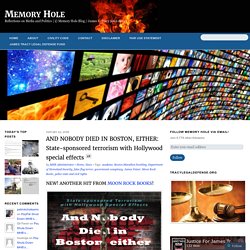 The Boston police were calling out on bullhorns, “This is a drill! This is a drill!” PNAS 2016 Del Vicario 554 9. The New York Times Publishes Sandy Hook Disinformation and Propaganda. Prof. 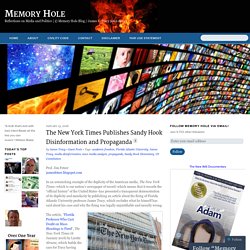 Jim Fetzerjamesfetzer.blogspot.com In an astonishing example of the duplicity of the American media, The New York Times–which is our nation’s newspaper of record–which means that it records the “official history” of the United States–has presented a transparent demonstration of its duplicity and mendacity by publishing an article about the firing of Florida Atlantic University professor James Tracy, which excludes what he himself has said about his case and why. Three years later … Why do professional journalists still fail to report the news?

On January 11, 2013 CNN’s Anderson Cooper sent reporters to my campus office, and later my residence, in an effort to inquire why a professor trained in media studies and criticism would ever publicly question the corporate news media’s reportage of the Sandy Hook massacre event. 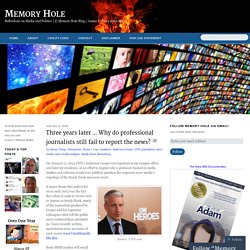 Source: CNN.com A major theme this author hit on in early 2013 was the fact that when it came to events such as Aurora or Sandy Hook, much of the journalism produced by Cooper and his superstar colleagues often left the public more confused than informed. As I have recently written, mainstream news accounts of such events wasn’t traditionally like this. Some MHB readers will recall how I later gave Mr. False-Flag Terror Research: The Coincidence Theorem. Kevin Scott KingTruthShock One method I use to try and ascertain what the truth is from any narrative is what I call the Possible-Probable test. 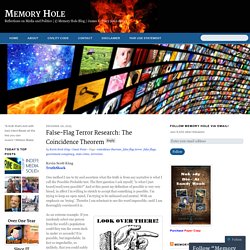 The first question I ask myself; “is what I just heard/read/seen possible?” And at this point my definition of possible is very very broad, in affect I’m willing to stretch to accept that something is possible. I’m trying to keep an open mind, I’m trying to be unbiased and neutral. Watch. Sandy Hook Massacre. On the morning of December 14, 2012, lone gunman 20-year-old Adam Lanza broke into the Sandy Hook Elementary School in Newtown, Connecticut, and shot to death 20 young children and 6 adults. 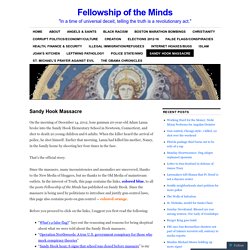 When the killer heard the arrival of police, he shot himself. Earlier that morning, Lanza had killed his mother, Nancy, in the family home by shooting her four times in the face. That’s the official story. The Curious Parents of Noah Pozner. Originally published on Fellowship of the Minds, April 3, 2014. 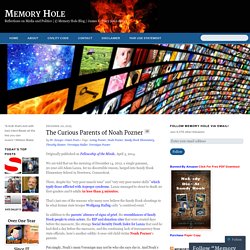 We are told that on the morning of December 14, 2012, a single gunman, 20-year-old Adam Lanza, for no discernible reason, barged into Sandy Hook Elementary School in Newtown, Connecticut. Kevin Scott King: What is a False Flag? Recent MHB contributor interviewed on his article “Anatomy of False-Flag Events“ With Fox News 1450 on the Kate Dalley Show. Fox you say?!? That was my initial reaction when I got the request. But it turns out this Fox radio station is in. The False Flag Formula – 15 Ways to Detect a False Flag Operation. Just Another “C.I.A. False Flag”? Analyzing Mass Shooting Events. On this episode Niles and Frasier Mercado discuss their recent study, Oregon Shooting: Just Another C.I.A.

False Flag, which provides an overview of the October 1, 2015 Umpqua Community College shooting in Roseburg Oregon. The Mercados explain how this work and similar ventures in critical thinking can aid individuals to better understand media coverage of and dramatic increase in mass shooting events, and how such incidents relate to larger socioeconomic and geopolitical frameworks. Audio Player Download. False-Flag Terror: A Historical and Analytical Overview. A Brief History of False Flag Terror. Found: The Islamic State's Terror Laptop of Doom. Keith Alexander, the recently retired director of the National Security Agency, left many in Washington slack-jawed when it was reported that he might charge companies up to $1 million a month to help them protect their computer networks from hackers. What insights or expertise about cybersecurity could possibly justify such a sky-high fee, some wondered, even for a man as well-connected in the military-industrial complex as the former head of the nation's largest intelligence agency?