The Lesson of the Monkeys 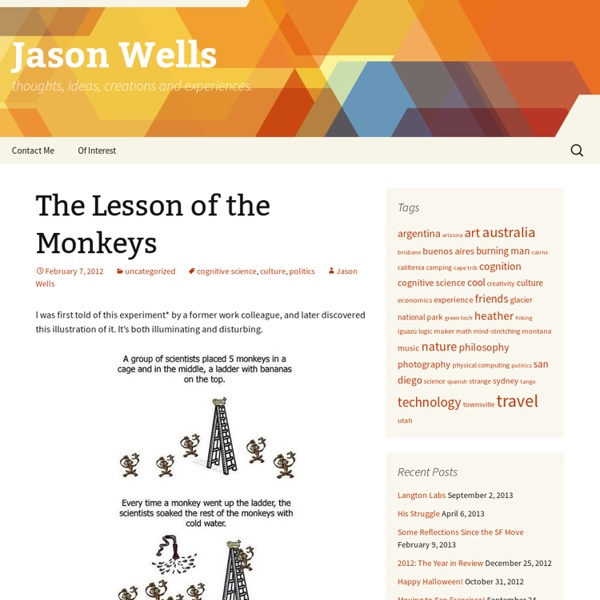 I was first told of this experiment* by a former work colleague, and later discovered this illustration of it. It’s both illuminating and disturbing. There is a clunky word that describes this phenomenon: filiopietism, or the reverence of forebears or tradition carried to excess. But I prefer another term for it: the tragic circle. I believe many of these tragic circles exist, mostly unseen, in across all cultures and societites, causing untold harm. When discovered, they should be terminated. The lesson is as obvious as it is important: question everything. * Stephenson, G. Related:  Distorted Thinking

Western Philosophy Psychology of Cyberspace - The Online Disinhibition Effect On the other hand, the disinhibition effect may not be so benign. Out spills rude language and harsh criticisms, anger, hatred, even threats. Or people explore the dark underworld of the internet, places of pornography and violence, places they would never visit in the real world. We might call this toxic disinhibition. On the benign side, the disinhibition indicates an attempt to understand and explore oneself, to work through problems and find new ways of being. You Don't Know Me (dissociative anonymity)As you move around the internet, most of the people you encounter can't easily tell who you are. As the character now becomes more elaborate and "real" within our minds, we may start to think, perhaps without being fully aware of it, that the typed-text conversation is all taking place within our heads, as if it's a dialogue between us and this character in our imagination - even as if we are authors typing out a play or a novel.

How To Run Your Meetings Like Apple and Google Designed by Dmitry Baranovskiy for the Noun Project The creative routines of famous creatives has been popular internet fodder this year. The Pacific Standard thinks this obsession and trend of emulating famous artist’s habits is problematic, to say the least. The larger picture, says Casey N. Cep, is that most artists did not always followed these routines they’re known for anyways. The idea that any one of these habits can be isolated from the entirety of the writer’s life and made into a template for the rest of us is nonsense. We often talk about process at 99U, so we think this is a great debate. Read the rest of the article here. What Does Your Body Language Say About You? How To Read Signs and Recognize Gestures - Jinxi Boo - Jinxi Boo Art by LaetitziaAs we all know, communication is essential in society. Advancements in technology have transformed the way that we correspond with others in the modern world. Because of the constant buzz in our technological world, it's easy to forget how important communicating face-to-face is. When conversing old-school style, it's not only speech we verbalize that matters, but what our nonverbal gestures articulate as well. Body language is truly a language of its own. We all have quirks and habits that are uniquely our own. 10% from what the person actually says40% from the tone and speed of voice50% is from their body language. Lowering one's head can signal a lack of confidence. Pushing back one's shoulders can demonstrate power and courageOpen arms means one is comfortable with being approached and willing to talk/communicate

Why We Believe Our Own Lies 0 Share Synopsis The power of cognitive dissonance in our daily lives. Leon Festinger was an American social psychologist, responsible for the development of the Theory of Cognitive Dissonance, which suggests that when people are persuaded to say things and to behave in ways that are inconsistent with their beliefs, an uncomfortable psychological tension is aroused. This tension will lead people to change their beliefs to fit their actual behavior, rather than the other way around, as originally thought. Festinger’s ground-breaking social psychological experiments provide a central insight into the stories we tell ourselves about why we think and behave the way we do. You are told the experiment is about how your expectations affect the actual experience of a task. Your first task is extremely boring. Then you are ushered through to another room where you are interviewed about the experiment you've just done. "No," you insist. The Power of Cognitive Dissonance

Vision Without Obstruction: What We Learn From Steve Jobs In recent days, everyone has taken the news of Steve Jobs’ resignation and illness in different ways. For me, it has conjured up admiration and curiosity. More than anything else, I have always respected Jobs’ clarity. True, the man has always shunned the status quo, but I believe his rebel ways were only a consequence of his efforts to stay true to an original vision. Jobs didn’t “think different” just for the sake of it, he just refused to conform to traditional expectations and limitations. Some say Jobs’ possessed a “reality distortion field.” Material shortages and cost limitationsEnsuring compatibility with previous softwareMarket research with conflicting messagesPre-existing patents and features from competitorsMarketing and sales deadlines It must have been so seductive to stray at any moment and compromise to get it done. Jobs had a knack for sticking with his vision of what a product could and should be.

The Baader-Meinhof Phenomenon You may have heard about Baader-Meinhof Phenomenon before. In fact, you probably learned about it for the first time very recently. If not, then you just might hear about it again very soon. Baader-Meinhof is the phenomenon where one happens upon some obscure piece of information—often an unfamiliar word or name—and soon afterwards encounters the same subject again, often repeatedly. Anytime the phrase “That’s so weird, I just heard about that the other day” would be appropriate, the utterer is hip-deep in Baader-Meinhof. Most people seem to have experienced the phenomenon at least a few times in their lives, and many people encounter it with such regularity that they anticipate it upon the introduction of new information. The phenomenon bears some similarity to synchronicity, which is the experience of having a highly meaningful coincidence, such as having someone telephone you while you are thinking about them. The reason for this is our brains’ prejudice towards patterns.

The best part of my day… | Inter.Connect.Ed I love my job, every day I make a concerted effort to engage deep professional conversations with my team focusing purely our core business of learning. Sadly I speak to many educational leaders who talk about how they are always focusing on structural issues or non-core business but are desperate to effect change creating (a self-fulfilling dichotomy). So here is how I make sure that I have a best part of the day every day but more importantly that the best part of my day is also the biggest part of my day: Embrace my role as an instructional leader, I am not a janitor or an administrative clerk. As I move around the school I may need to pick up the occasional piece of misplaced rubbish or complete pointless paperwork but I don’t let the tasks define me as a leader.Be guided by my emotional intelligence, it knows far more about the premium solution than my intellectual intelligence ever will. How to you maintain the relentless focus on student learning?