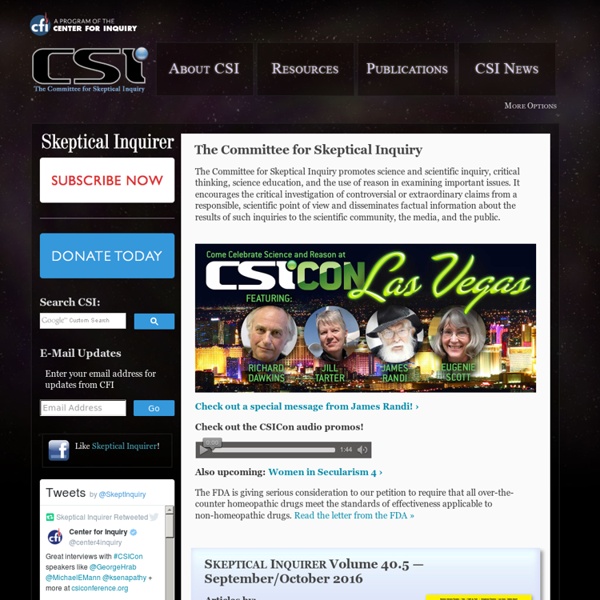 The mission of the Committee for Skeptical Inquiry is to promote scientific inquiry, critical investigation, and the use of reason in examining controversial and extraordinary claims. The FDA is giving serious consideration to our petition to require that all over-the-counter homeopathic drugs meet the standards of effectiveness applicable to non-homeopathic drugs. Read the letter from the FDA » Employment Opportunities: The Center for Inquiry is looking for a Web Developer. Read more » November/December 2013

How to verify photos and videos on social media networks This image was mistakenly broadcast by one of France’s largest TV channels, France 2. The scene was described as having unfolded in Iran, back in December 2009. A cursory glance reveals a range of details that could allow us to verify its authenticity. Are Iranian police shields the same colour as in this image?

Identify a Lie with 6 Simple Questions post written by: Marc Chernoff Email We all fall victim to at least a few lies during the course of our lifetime. Science and the Sea - Humboldt Current If you’re not a fan of anchovies, then the Pacific Coast of South America isn’t for you. A large fraction of the world’s anchovies are caught in the cold waters off Peru and Chile. They’re sustained by an ocean current that creates the most productive fisheries in the world. The Humboldt Current flows northward along the Pacific Coast of South America. Credit: Wikipedia. The Humboldt Current flows northward along the continent’s edge. 6 Best Fact Checking Websites That Help You Distinguish Between Truth and Rumors The Internet has been called “The Information Super Highway” and rightly so. It’s now the epicenter of breaking news and the free flowing information has brought the world and the people closer and made us aware of other cultures and traditions. But all this comes with a flipside.

Field Guide to Fake News Sites and Hoax Purveyors The sharp increase in popularity of social media networks (primarily Facebook) has created a predatory secondary market among online publishers seeking to profitably exploit the large reach of those networks and their huge customer bases by spreading fake news and outlandish rumors. Competition for social media’s large supply of willing eyeballs is fierce, and a number of frequent offenders regularly fabricate salacious and attention-grabbing tales simply to drive traffic (and revenue) to their sites. Facebook has worked at limiting the reach of hoax-purveying sites in their customers’ news feeds, inhibiting (but not eradicating) the spread of fake news stories.

Bad Astronomy Well now, this is an interesting discovery: astronomers have found what looks like a "super-Earth" – a planet more massive than Earth but still smaller than a gas giant – orbiting a nearby star at the right distance to have liquid water on it! Given that, it might – might – be Earthlike. This is pretty cool news. We’ve found planets like this before, but not very many! 6 Quick Ways to Spot Fake News The spectrum of less-than-credible links posted to social media sites is vast. In addition to deliberately written fake news stories (often somewhat inaccurately tagged as “satire”), the online world abounds with articles that are based on exaggerated, misconstrued, manipulated, misrepresented, or outright deceptive premises. It’s fair to say that the majority of users on social media sites wish to share interesting, funny, compelling, unique, or otherwise discussion-worthy material without having to run full-scale fact checks on everything. It’s also reasonable to observe that every so often, not-so-trustworthy information will sneak into posts despite the best efforts and intentions of social media users.

The Rogues Gallery Sam, an SGU listener, brought this to our attention the other day (thank you, Sam.) A new podcast has hit the iTunes shelves. It is called Scripture on Creation. And of course, it is correctly categorized under the ‘Religion and Spirituality’ category, isn’t it? Nope. It is in iTunes ‘Science and Medicine’ category. Six Easy Ways To Tell If That Viral Story Is A Hoax “And so it begins … ISIS flag among refugees in Germany fighting the police,” blared the headline on the Conservative Post; “with this new leaked picture, everything seems confirmed”. The image in question purported to show a group of Syrian refugees holding ISIS flags and attacking German police officers. For those resistant to accepting refugees into Europe, this story was a godsend. The photo quickly spread across social media, propelled by far-right groups such as the English Defence League and Pegida UK. At the time of writing, the page claims to have been shared over 300,000 times. The problem is, the photo is three years old, and has precious little to do with the refugee crisis.

NeuroLogica Blog Jul 14 2015 Why Pluto is Important As I write this post we are just minutes away from the closest approach of the New Horizons probe to Pluto, the farthest world we have thus far explored (24 minutes and counting). It’s an exciting moment, not just for astronomy buffs or science enthusiasts, but for humanity. I’m glad to see an appropriate level of excitement among the media and the general public. The Empathy Trap by Peter Singer PRINCETON – Soon after Barack Obama was elected President of the United States, he told a young girl: “We don’t have enough empathy in our world today, and it is up to your generation to change that.” Obama expressed a widespread view, so the title of a new book, Against Empathy, by Yale University psychologist Paul Bloom, comes as a shock. How can anyone be against something that enables us to put ourselves in others’ shoes and feel what they feel?

Related:
Related:  Disinformation   -  Spying and Disinformation to Crush Dissent and Keep Secrets   -  Disinformation & False Flags   -  Information War, Disinformation to Support War   -  Disinformation and Bad Science   -  Gapminder: Unveiling the beauty of statistics for a fact based world view.   -  Zététique — Wikipédia   -  Uncyclopedia | FANDOM powered by Wikia   -  Everything2   -  Principia Discordia | the book of Chaos, Discord and Confusion | Fnord!   -  Untrusted Connection   -  Axolot   -  You Are Not So Smart   -  Identify a Lie with 6 Simple Questions   -  Deception | Psychology Today   -  Literallyunbelievable.org   -  TruthTheory -   -  Think On Your Own   -  This Chart Shows The Bilderberg Group's Connection To Everything In The World   -  The Lesson of the Monkeys | Jason Wells   -  Mysite   -  JESTERS COURT – OFFICIAL BLOG   -  Verification Junkie   -  You Are Not So Smart   -  How Covert Agents Infiltrate the Internet to Manipulate, Deceive, and Destroy Reputations   -  He Climbs Down Into a Drain Holding a Carrier. Wait Till You See What’s Hiding in the Shadows - Scribol.com   -  How technology disrupted the truth | Katharine Viner | Media   -  The Anonymous Blacklist Promoted by the Washington Post Has Apparent Ties to Ukrainian Fascism and CIA Spying   -  Why Facts Don’t Change Our Minds | The New Yorker