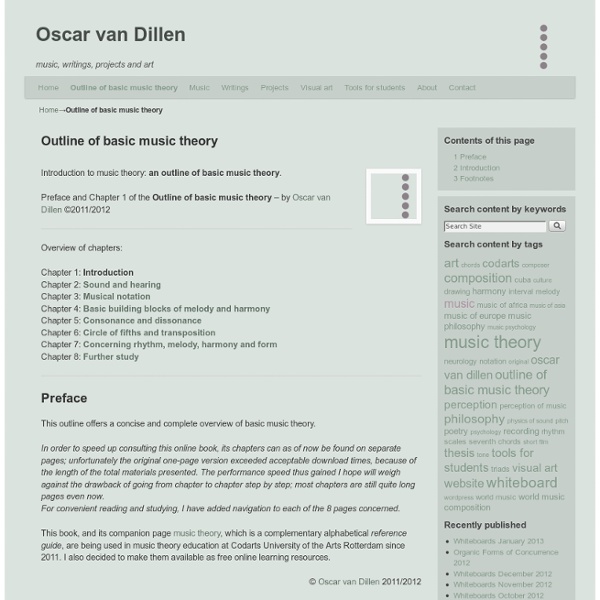 I analyzed the chords of 1300 popular songs for patterns. This is what I found. For many people, listening to music elicits such an emotional response that the idea of dredging it for statistics and structure can seem odd or even misguided. But knowing these patterns can give one a deeper more fundamental sense for how music works; for me this makes listening to music a lot more interesting. Of course, if you play an instrument or want to write songs, being aware of these things is obviously of great practical importance. In this article, we’ll look at the statistics gathered from 1300 choruses, verses, etc. of popular songs to discover the answer to a few basic questions. First we’ll look at the relative popularity of different chords based on the frequency that they appear in the chord progressions of popular music. Then we’ll begin to look at the relationship that different chords have with one another.

Chord Theory for the Guitar Folk Guitar Home Page The basic chord is called a triad. It consists of three notes. Harmony Explained: Progress Towards A Scientific Theory of Music The Major Scale, The Standard Chord Dictionary, and The Difference of Feeling Between The Major and Minor Triads Explained from the First Principles of Physics and Computation; The Theory of Helmholtz Shown To Be Incomplete and The Theory of Terhardt and Some Others Considered Daniel Shawcross Wilkerson Begun 23 September 2006; this version 19 February 2012. Abstract and Introduction Most music theory books are like medieval medical textbooks: they contain unjustified superstition, non-reasoning, and funny symbols glorified by Latin phrases.

Free Music Theory Worksheets! Material on this page is free.NEW! you can now consult an index of terms used in these worksheets.Also explore a page of worksheet extras: Worksheet Answers, Test Templates and Flash Presentations. Here are some testimonials from music teachers about these workbook chapters: Y-chromosomal Adam In human genetics, Y-chromosomal Adam (Y-MRCA) is a hypothetical name given to the most recent common ancestor (MRCA) from whom all currently living people are descended patrilineally (tracing back only along the paternal or male lines of their family tree). However, the title is not permanently fixed on a single individual (see below). Y-chromosomal Adam is named after the biblical Adam, but the bearer of the chromosome was not the only human male alive during his time.[1] His other male contemporaries could also have descendants alive today, but not, by definition, solely through patrilineal descent. Analogous to Y-chromosomal Adam, Mitochondrial Eve is the woman from whom all living humans are descended matrilineally, who lived about 140,000 to 200,000 years ago in Africa. The estimate is based on inherited mtDNA though mothers. Definition[edit]

Scientists discover most relaxing tune ever - Music A British band and a group of scientists have made the most relaxing tune in the history of man, an Mp3 of which is at the bottom of this article. Sound therapists and Manchester band Marconi Union compiled the song. Scientists played it to 40 women and found it to be more effective at helping them relax than songs by Enya, Mozart and Coldplay. Weightless works by using specific rhythms, tones, frequencies and intervals to relax the listener. A continuous rhythm of 60 BPM causes the brainwaves and heart rate to synchronise with the rhythm: a process known as ‘entrainment’. Low underlying bass tones relax the listener and a low whooshing sound with a trance-like quality takes the listener into an even deeper state of calm.

Online Ear Training with Intervals, Melodies, and Jazz Chord Progressions Play Mode controls what happens when you click play. Auto-mode, puts the player on a loop, delaying each loop for as long as desired. Check this box to immediately show the first note of the sequence as it plays. In Rhythm Section mode, the "first note" displayed is the key without the progression/chord type. Check this box to delay the complete results of what was just played. Set the key center to the key center of your instrument so you can play along.

10 Psychological Experiments That Went Horribly Wrong Psychology as we know it is a relatively young science, but since its inception it has helped us to gain a greater understanding of ourselves and our interactions with the world. Many psychological experiments have been valid and ethical, allowing researchers to make new treatments and therapies available, and giving other insights into our motivations and actions. Sadly, others have ended up backfiring horribly — ruining lives and shaming the profession. Here are ten psychological experiments that spiraled out of control.

Know Every Note on the Guitar in 9 Days Knowing every note on the guitar is a challenge unique to the instrument. A saxophone has only one way to finger each note, while a guitar usually has a few different strings and four fingers to choose from. String a few notes together and the permutations of how to play them will wreck your brain. Pianists have a similar problem with ten available digits, but you can memorize the notes on a keyboard in a matter of minutes; the same pattern of white and black keys repeats every octave. Jog Your Memory Collected by Sandy Sukhov Cressman Here are snippets of many well-known songs and tunes. The first notes of each snippet correspond to a particular musical interval. Practice these intervals by randomly choosing a starting note from a piano or pitch pipe. Then, thinking of the song clue for that interval, try and sing the prescribed interval up, or down.