London South Bank University. Mike Davis: Fear and Money in Dubai. New Left Review 41, September-October 2006 On the rim of the war zone, a new Mecca of conspicuous consumption and economic crime, under the iron rule of Sheikh al-Maktoum. 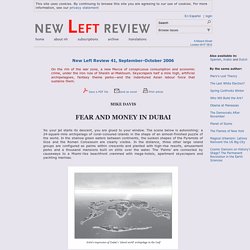 Skyscrapers half a mile high, artificial archipelagoes, fantasy theme parks—and the indentured Asian labour force that sustains them. ‘As your jet starts its descent, you are glued to your window. The scene below is astonishing: a 24-square-mile archipelago of coral-coloured islands in the shape of an almost-finished puzzle of the world.

In the shallow green waters between continents, the sunken shapes of the Pyramids of Giza and the Roman Colosseum are clearly visible. ‘As the plane slowly banks toward the desert mainland, you gasp at the even more improbable vision ahead. ‘Your jellyfish-shaped hotel, the Hydropolis, is, in fact, exactly 66 feet below the surface of the sea. Fantasy levitated Welcome to a strange paradise. History and Theory LSBU blog. My initial response is a very apathetic attitude to all this urgency and impending doom. 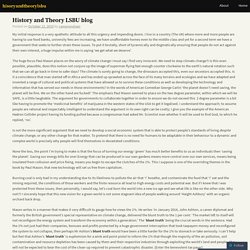 I live in a country (The UK) where more and more people are having to use food banks, university fees are increasing, we have unaffordable homes even to the middle class and yet for a second term we have a government that seeks to further strain these issues. To put it brutally, short of tyrannically and dogmatically ensuring that people do not act against their own interest, a huge impulse within me is saying ‘we get what we deserve’. The huge focus Paul Mason places on the worry of climate change I must say I find very innocent. We need to stop climate change?! Is this even possible, plausible, does this notion not conjure up the image of superman flying fast enough counter clockwise to the earth’s natural rotation such that we can all go back in time to safer days? Mason writes in a manner that makes it very difficult to gauge how he views the 1%. Like this: Like Loading... THE FIRST GREAT FEMALE ARCHITECT. Today Zaha Hadid is an award-winning architect, designing Tokyo's stadium for the 2020 Olympics and Qatar's for the 2022 World Cup. 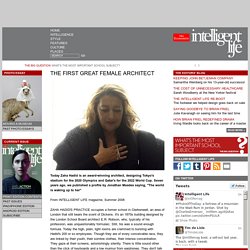 Seven years ago, we published a profile by Jonathan Meades saying, "The world is waking up to her" From INTELLIGENT LIFE magazine, Summer 2008 ZAHA HADID'S PRACTICE occupies a former school in Clerkenwell, an area of London that still bears the scent of Dickens. It's an 1870s building designed by the London School Board architect E.R. Robson, who, typically of his profession, was unquestionably formulaic. "What is exciting," says Zaha, "is the link between computing and fabrication. "The computer is a tool," I agree. "No. What then? The workers on the factory floor—my way of putting it, not hers—are, she says "connected by digital knowledge...They have very different interests from 20 years ago. " Sure. TEN MINUTES' WALK from the practice is Hadid's apartment—austerely elegant, a sort of gallery of her painting and spectacularly lissom furniture. "How large? Will Self · Diary: Battersea Power Station · LRB 18 July 2013.

‘Rome completely bowled me over!’ 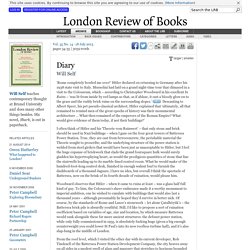 Hitler declared on returning to Germany after his 1938 state visit to Italy. Mussolini had laid on a grand night-time tour that climaxed in a visit to the Colosseum, which – according to Christopher Woodward in his excellent In Ruins – ‘was lit from inside by red lamps so that, as if ablaze, it cast a bloody glow on to the grass and the ruddy brick ruins on the surrounding slopes.’[*]​＊ Descanting to Albert Speer, his pet pseudo-classical architect, Hitler explained that ‘ultimately, all that remained to remind men of the great epochs of history was their monumental architecture … What then remained of the emperors of the Roman Empire?

What would give evidence of them today, if not their buildings?’ I often think of Hitler and his ‘Theorie vom Ruinwert’ – that only stone and brick should be used in Nazi buildings – when I gaze on the four great towers of Battersea Power Station.