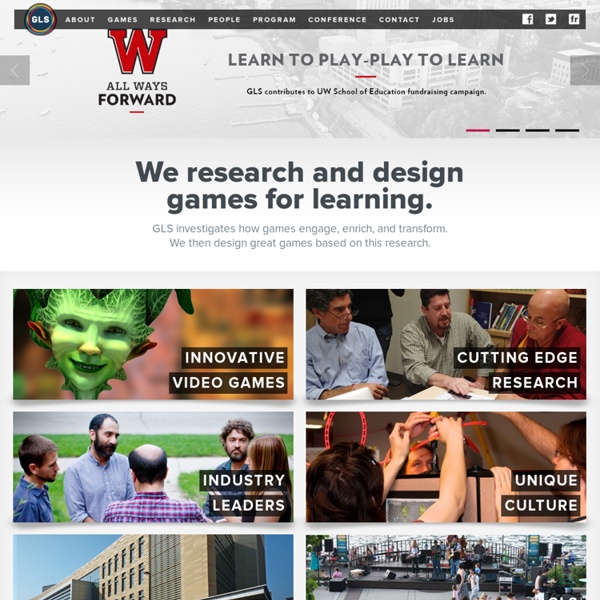 kurt's research Squire, K.D. (in press). Game-based learning: An emerging paradigm for learning. To appear in Performance Improvement Quarterly. Squire, K. ARGNet: Alternate Reality Gaming Network Playforce A searchable database of games with learning potential, Playforce allows users to explore games related to specific learning content, academic standards or twenty-first century skills, like empathy, systems thinking or collaboration. Playforce provides an indispensable resource to educators and parents looking to use games in service of specific learning goals. Game perspectives on Playforce are player-generated and moderated by a user community. In addition, Playforce trains players to develop the critical tools to articulate the learning that occurs in the games they love to play, using a language which professionals and other adults can understand… a language which connects to traditional academic standards and twenty-first-century skills. Developed in partnership with E-Line Media, Playforce is now in beta.

Home | co.lab AR Games The MIT Teacher Education Program, in conjunction with The Education Arcade, has been working on creating "Augmented Reality" simulations to engage people in simulation games that combine real world experiences with additional information supplied to them by handheld computers. The first of these games, Environmental Detectives (ED), is an outdoor game in which players using GPS guided handheld computers try to uncover the source of a toxic spill by interviewing virtual characters and conducting large scale simulated environmental measurements and analyzing data. This game has been run at three sites, including MIT, a nearby nature center, and a local high school. Early research has shown that this mode of learning is successful in engaging university and secondary school students in large scale environmental engineering studies, and providing an authentic mode of scientific investigation.

playforce.org - Playforce: Learning from the games we play Quest to Learn - insideschools.org Quest to Learn offers a new approach to education based on the principles that make video games enjoyable. It's a radical experiment that may sound flaky, but Q2L is not an oasis for students looking to play video games all day. It's a place where kids learn traditional subjects like history, algebra and chemistry—albeit in an untraditional way. "It's a common misconception about this school that you're going to come here and you're going to play video games to learn," explained one of the school's founders and co-directors, Arana Shapiro. "When we talk about games, we're talking about game-like learning--not about playing games but about looking at what makes games engaging for learning." For example, students pretend they are spies in ancient Greece and re-enact the Peloponnesian War, learning about Athens and Sparta and the difference between oligarchy and democracy in the process. Q2L is a place where teachers are constantly learning. Admissions: Contact the school to attend a tour.