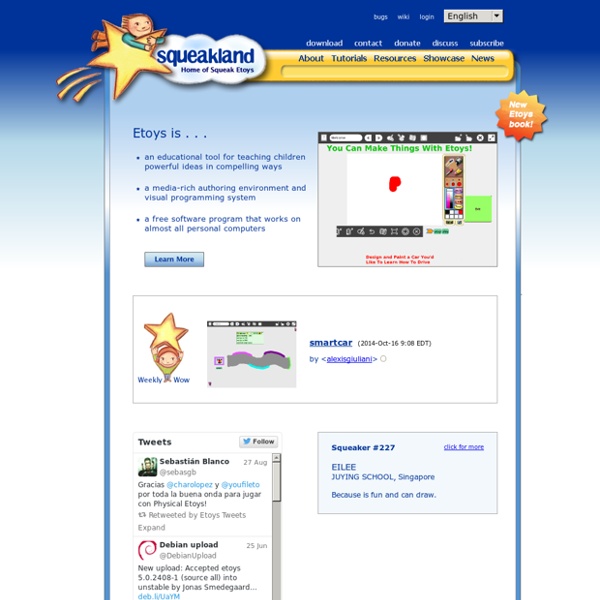 Learn Minecraft Hour of Code Grades 2+ | Blocks Moana: Wayfinding with Code STELLA Programming Language Motivation Developers of intelligent applications face a problem today, since none of the currently ``healthy'' languages such as C++ or Java provide adequate environments to support symbolic programming tasks. While Common-Lisp would probably still be the best language choice for many of these tasks, its dwindling vendor support and user base make it more and more difficult to justify its use. When we embarked on the task of developing PowerLoom® which had to be delivered in C++, we were faced with exactly this problem. Our response was to invent a new programming language, called STELLA, that incorporates those aspects of Common Lisp that we deemed essential into a language that can still be translated into efficient, conventional and readable C++ and Java code. Overview

Make iOS, Android and Flash Games with Stencyl Build Worlds If you're used to graphics editors like Photoshop, you'll feel right at home in the Scene Designer. Familiar features, such as a selection tool, zooming, grid-snapping and flood fill, will help you quickly craft complex worlds out of Actors, Tiles and Terrain. Create Actors Drop in graphics from your computer to create Actors on the fly. Then use Stencyl's Actor Editor to tweak your Actors' appearances, behaviors and physical properties, and to get them ready for showtime. Browse Game Assets When it comes to game development, most of us aren't Jacks of all trades. But thanks to StencylForge, our integrated marketplace, we don't have to be.

MIT App Inventor Get Started Follow these simple steps to build your first app. Tutorials Step-by-step guides show you how to build all kinds of apps. Programming With Blocks Syntax is a royal pain in the neck for beginning programmers. For a lot of kids learning computing or programming syntax is the single largest hurtle. It’s hard to teach both a new (programming) language and a new way of thinking and problem solving at the same time. The SML.NET compiler SML.NET is a compiler for the functional programming language Standard ML that targets the .NET Common Language Runtime and which supports language interoperability features for easy access to .NET libraries. This web site was last updated on 02-June-06. Download SML.NET is available for download in either binary or source form. The current version is: SML.NET 1.2 build 1613 of 02-June-06. New in This Release

Code Monster from Crunchzilla <h2>Code Monster gets kids excited about programming. It is a combination of a game and tutorial where kids experiment with learning to code. <p> Code Monster use Javascript. Please enable Javascript if you want the play with the Code Monster. Otherwise, Code Monster will not be able to play with you. </p><p></h2> EDMA - GNU Project - Free Software Foundation (FSF) GNU EDMA is the Entorno de Desarrollo Modular y Abierto, or in English the Modular and Open Development Environment (named MODE by Russel Reed in the first GNU/EDMA documentation translations). The name is in Spanish because GNU EDMA has been developed by GPI (Grupo de Procesado de Imagen or Image Processing Group) at Vigo University, Spain. GNU EDMA provides an Object Oriented Component-Based development environment to build modular and evolving applications as well as highly reusable components. To achieve this, GNU EDMA shares features of OO programming languages and component based systems in a loosely coupled environment. News For the latest news check the Savannah Project Page.