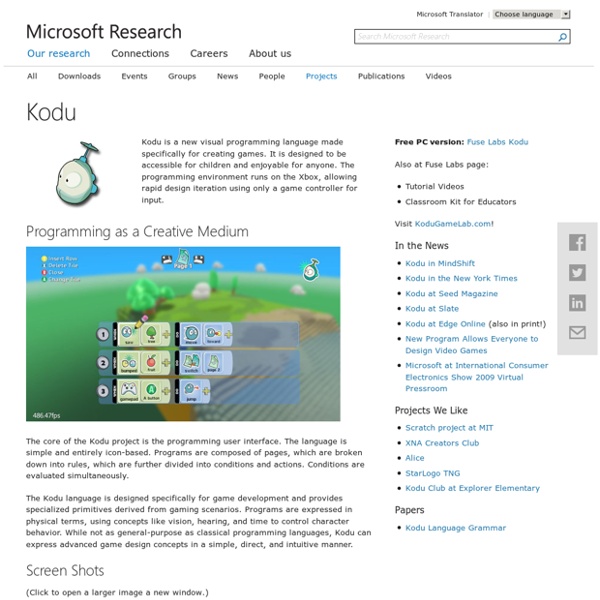 Kodu is a new visual programming language made specifically for creating games. It is designed to be accessible for children and enjoyable for anyone. The programming environment runs on the Xbox, allowing rapid design iteration using only a game controller for input. Programming as a Creative Medium The core of the Kodu project is the programming user interface. The language is simple and entirely icon-based. The Kodu language is designed specifically for game development and provides specialized primitives derived from gaming scenarios. Key Features Kodu provides an end-to-end creative environment for designing, building, and playing your own new games. High-level language incorporates real-world primitives: collision, color, visionUses Xbox 360 Game Controller for input — no keyboard requiredRuns on XBox 360 and PCInteractive terrain editorBridge and path builderTerrain editor - create worlds of arbitrary shape and size20 different characters with different abilities

Download Swift Latest Development Snapshots Development Snapshots are prebuilt binaries that are automatically created from mainline development branches. These snapshots are not official releases. They have gone through automated unit testing, but they have not gone through the full testing that is performed for official releases. Swift is covered by the Swift License at swift.org/LICENSE.txt.

Teaching kids how to code by Marshall Brain Quick Intro - If you are looking for a quick and easy way to teach your kid a real programming language, without downloading anything or buying anything, try these Python tutorials. Your kid will be writing and modifying code in just a few minutes. Marshall Brain's quick and easy Python tutorials Serious Games Revolutionizing Music Learning Serious Games teaching kids how to play musical instruments Via: JoyTunes – Music Serious Games For Fun and EducationJoyTunes has just released its educational Serious Game which teaches kids how to play musical instruments by playing a video game. It has been launched as a fun and educational product that introduces a brand new way for children to learn how to play an instrument. Please check out the media release below for the full story.

LOTR Timeline Graph The ever-hilarious xkcd featured a comic which was very much a visualization. It was a chart showing the interactions between characters from a handful of movies. The comic was the kick I needed to do a quick experiment with timeline-based graph visualizations. Here's the result. It's a bit of a mess, but what I've done is synchronize three components: a slider, the original comic from xkcd, and the graph visualization. About An overview of Kodu. (Click to play) Kodu lets kids create games on the PC and Xbox via a simple visual programming language. Kodu can be used to teach creativity, problem solving, storytelling, as well as programming.

The Languages And Frameworks You Should Learn In 2016 Martin Angelov A lot happened in the software development world in 2015. There were new releases of popular programming languages, new versions of important frameworks and new tools. You will find a short list of the new releases that we think are the most important below, together with suggestions for the things we believe would be a great investment of your time to learn in 2016. The Trends Shift from the backend to the frontend 5 Ways to Start Learning How to Code Right Now Learning to code is one of the most powerful and satisfying things you can ever do. If you’re a designer, learning to code can help you understand what you’re creating for, and if you’re looking to build a startup from scratch, being a technical founder can make things exponentially easier for you. No matter why you want to learn, the only thing you really need is curiosity. But if you’re just starting out as a novice and don’t know where to begin, there are plenty of ways to get started.

BEAT THE CENSOR - an illustration of different censoring attempts SCORE: 0000 | Users connected: 000 Why do some countries censor the internet? Frankly we do not know and you would need to ask the respective governments why they are doing it. Where does the data comes from? We use a mashup of data coming from herdict.org and the OpenNet Initiative. The data was made available to us during the EU Hackathon 2011.

Network Visualization Immersion by the MIT Media Lab is a view into your inbox that shows who you interact with via email over the years. Immersion is an invitation to dive into the history of your email life in a platform that offers you the safety of knowing that you can always delete your data.Just like a cubist painting, Immersion presents users with a number of different perspectives of their email data. It provides a tool for self-reflection at a time where the zeitgeist is one of self-promotion. It provides an artistic representation that exists only in the presence of the visitor. It helps explore privacy by showing users data that they have already shared with others.

Creative Computing 7 units44 activitiesremixing encouraged download the Scratch 3.0 version of the guide> help learnerscreate new worldswith computing download the Scratch 3.0 version of the guide an introductorycomputing curriculumusing Scratch Scratch 3.0 is here! Why all our kids should be taught how to code A vigorous debate has begun – within government and elsewhere – about what should be done about information and communication technology (ICT) in the school curriculum. Various bodies – the Royal Society, the Association for Learning Technology, Computing at School (a grassroots organisation of concerned teachers) and the British Computer Society, to name just four – have published reports and discussion documents aimed at ministers and the Department for Education. Michael Gove, the education secretary, made an enigmatic speech at the recent BETT technology conference indicating that a rethink is under way in the bowels of Whitehall. Meanwhile, in another part of the forest, there are some astonishing developments happening – such as the fact that more than a million people have already placed orders for Raspberry Pi, the cheap, credit-card-sized computer developed by Cambridge geeks, which began shipping last week.

Network Visualization While we're on the topic of academic papers and how they're linked, Johan Bollen et. al used clickstream data to draw detailed maps of science, from the point of view of those actually reading the papers. That is, instead of relying on citations, they used log data on how readers request papers, in the form of a billion user interactions on various web portals. Maps of science derived from citation data visualize the relationships among scholarly publications or disciplines.