The Absolute Minimum Every Software Developer Absolutely, Positively Must Know About Unicode and Character Sets (No Excuses!) 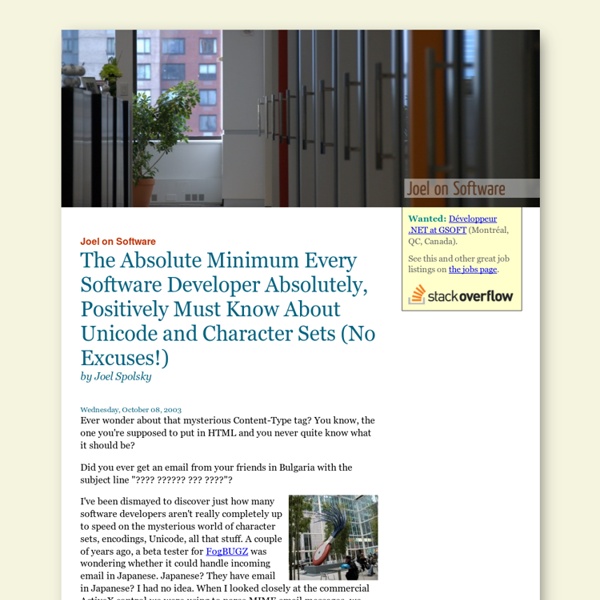 by Joel Spolsky Wednesday, October 08, 2003 Ever wonder about that mysterious Content-Type tag? You know, the one you're supposed to put in HTML and you never quite know what it should be? Did you ever get an email from your friends in Bulgaria with the subject line "???? ?????? I've been dismayed to discover just how many software developers aren't really completely up to speed on the mysterious world of character sets, encodings, Unicode, all that stuff. But it won't. So I have an announcement to make: if you are a programmer working in 2003 and you don't know the basics of characters, character sets, encodings, and Unicode, and I catch you, I'm going to punish you by making you peel onions for 6 months in a submarine. And one more thing: In this article I'll fill you in on exactly what every working programmer should know. A Historical Perspective The easiest way to understand this stuff is to go chronologically. And all was good, assuming you were an English speaker. Unicode Hello Encodings

New pCell Technology Could Revolutionize Smartphone Connections A new type of wireless antenna may soon spell the end of sluggish data connections and endless video buffering. Created by Artemis Networks’ Steve Perlman, the technology, called pCell, is a new take on the standard cellular antenna, and it could put an end to your connectivity woes. Unlike normal cell sites that try to avoid interfering with each other, pCells use a larger number of small sites to combine their signals and provide users with the maximum network bandwidth offered by their cellular connection. Why does this matter? Daily Builds Are Your Friend by Joel Spolsky Saturday, January 27, 2001 In 1982, my family took delivery of the very first IBM-PC in Israel. We actually went down to the warehouse and waited while our PC was delivered from the port.

styleguide - Style guides for Google-originated open-source projects Every major open-source project has its own style guide: a set of conventions (sometimes arbitrary) about how to write code for that project. It is much easier to understand a large codebase when all the code in it is in a consistent style. “Style” covers a lot of ground, from “use camelCase for variable names” to “never use global variables” to “never use exceptions.”

CSS Get the lowdown on the key pieces of Bootstrap's infrastructure, including our approach to better, faster, stronger web development. HTML5 doctype Bootstrap makes use of certain HTML elements and CSS properties that require the use of the HTML5 doctype. Include it at the beginning of all your projects. <!DOCTYPE html><html lang="en"> ...

Become a Programmer, Motherfucker If you don't know how to code, then you can learn even if you think you can't. Thousands of people have learned programming from these fine books: Learn Python The Hard Way 10 Best Tech Blogs - InsideTech.com Career Advice >> Browse Articles >> Career Resources It’s hard to remember a world without blogs. Originally a sort of online journal full of mundane personal updates, web logs have morphed into an extremely powerful form of communication. They were once shunned by the mainstream — now they are the mainstream.

You aren't gonna need it "You aren't gonna need it"[1][2] (acronym: YAGNI)[3] is a principle of extreme programming (XP) that states a programmer should not add functionality until deemed necessary.[4] Ron Jeffries writes, "Always implement things when you actually need them, never when you just foresee that you need them."[5] The phrase also appears altered as, "You aren't going to need it"[6][7] or sometimes phrased as, "You ain't gonna need it". YAGNI is a principle behind the XP practice of "do the simplest thing that could possibly work" (DTSTTCPW).[2][3] It is meant to be used in combination with several other practices, such as continuous refactoring, continuous automated unit testing and continuous integration. Used without continuous refactoring, it could lead to messy code and massive rework.

How I hired a great web developer on oDesk for $12/hr I am working on the weekly planner called Week Plan and I decided I needed someone to help me develop it while I focus on the other tasks of the business. Many people resist the idea of outsourcing so I thought I would show how I went through the process myself and found a great web developer. 1. CSS Color Module Level 3 Abstract CSS (Cascading Style Sheets) is a language for describing the rendering of HTML and XML documents on screen, on paper, in speech, etc. It uses color-related properties and values to color the text, backgrounds, borders, and other parts of elements in a document.

OS X Lion – Terminal Colours Having recently I upgraded my Mac to OS X Lion the first thing I noticed was my terminal's color theme was no longer working properly! Prior to upgrading I was using a combination of Visor (now replaced by TotalTerminal), SIMBL, and TerminalColors along with the IR_Black theme posted by Todd Werth as detailed in his blog entry A black OS X Leopard Terminal theme that is actually readable. As the method to solve my problem took a bit of searching and trial and error I am posting the process I went through in hopes of helping others whom may stumble upon this post. Steps taken: