Where is home - Mark Storey. The Voice of Trichotillomania. Written by: Sandy Rosenblatt I wanted to love myself. 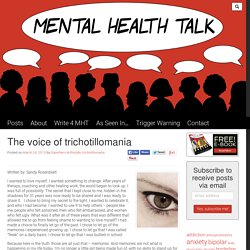 I wanted something to change. After years of therapy, coaching and other healing work, the world began to look up. I was full of possibility. The secret that I kept close to me, hidden in the shadows for 31 years was now ready to be shared and I was ready to share it. Because here is the truth: those are all just that – memories. Addiction, Mental Health, Safe Spaces and Stigmatization. (Image: Inner profile via Shutterstock) 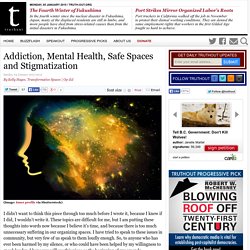 When I talk about mental illnesses, I often point out that as a matter of public policy they are the only chronic conditions we wait until Stage 4 – the final stage in a chronic disease process – to treat, and then often only through incarceration. 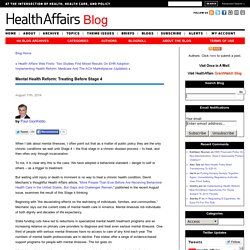 To me, it is clear why this is the case. We have adopted a behavioral standard – danger to self or others – as a trigger to treatment. But waiting until injury or death is imminent is no way to treat a chronic health condition. David Mechanic’s thoughtful Health Affairs article, “More People Than Ever Before Are Receiving Behavioral Health Care in the United States, But Gaps and Challenges Remain,” published in the recent August issue, examines the result of this Stage 4 thinking. Beginning with “the devastating effects on the well-being of individuals, families, and communities,” Mechanic lays out the current state of mental health care in America. Screening for Mental Health. Researchers have documented a connection between low socioeconomic status (low SES, or those who are poor) and the likelihood of also being diagnosed with a mental illness or having attempted suicide. 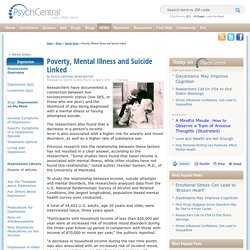 The researchers also found that a decrease in a person’s income level is also associated with a higher risk for anxiety and mood disorders, as well as a higher rate of substance use. Previous research into the relationship between these factors has not resulted in a clear answer, according to the researchers. “Some studies have found that lower income is associated with mental illness, while other studies have not found this relationship,” noted author Jitender Sareen, M.D., of the University of Manitoba. To study the relationship between income, suicide attempts and mental disorders, the researchers analyzed data from the U.S. National Epidemiologic Survey of Alcohol and Related Conditions, the largest longitudinal, population-based mental health survey ever conducted. It's Easier For Americans To Access Guns Than Mental Health Services.

Details about Friday’s horrific shooting spree at a Connecticut elementary school are still emerging, and it remains unknown whether the suspected shooters suffered from underlying mental health issues. It’s entirely possible that the perpetrators of today’s shooting were of sound mind. But the fact remains: in America, it’s currently easier for a poor person to get a gun than it is for them to get treatment for mental health issues. Most murders committed in the United States involve a firearm — particularly handguns. A quick search shows that a typical handgun can be purchased for anywhere between $250 and $500 .

A .223-caliber semi-automatic rifle — which some reports indicate was the type of firearm used in today’s attack — costs between $700 and $2000 . 5 Substances That Aggravate Anxiety - Mental Health Blog - Anxiety, Panic, Over the last few weeks I've looked in to various substances that are thought to have a negative effect on an anxiety disorder. 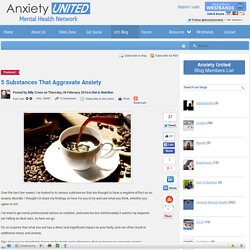 I thought I'd share my findings on here for you to try and see what you think, whether you agree or not. I've tried to get some professional advice on nutrition, and exercise but unfortunately it seems my requests are falling on deaf ears, so here we go. It's no surprise that what you eat has a direct and significant impact on your body, and can often result in additional stress and anxiety. This blog post is intended to focus on the foods and substances that are known to aggravate anxiety disorders. Caffeine Of all the things I have researched, it seems that caffeine is the most notorious for raising symptoms of anxiety and triggering panic attacks. Watch free: The Wind at My Door, plus 4 mental health films. To mark the annual World Mental Health Day (October 10, 2014), we’re offering our brand new feature doc, The Wind at My Door, free on NFB.ca from October 10 to 12, inclusive. 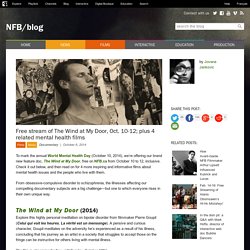 Check it out below, and then read on for 4 more inspiring and informative films about mental health issues and the people who live with them. From obsessive-compulsive disorder to schizophrenia, the illnesses affecting our compelling documentary subjects are a big challenge—but one to which everyone rises in their own unique way. The Wind at My Door (2014) Explore this highly personal meditation on bipolar disorder from filmmaker Pierre Goupil (Celui qui voit les heures, La vérité est un mensonge). A pensive and curious character, Goupil meditates on the adversity he’s experienced as a result of his illness, concluding that his journey as an artist in a society that struggles to accept those on the fringe can be instructive for others living with mental illness.