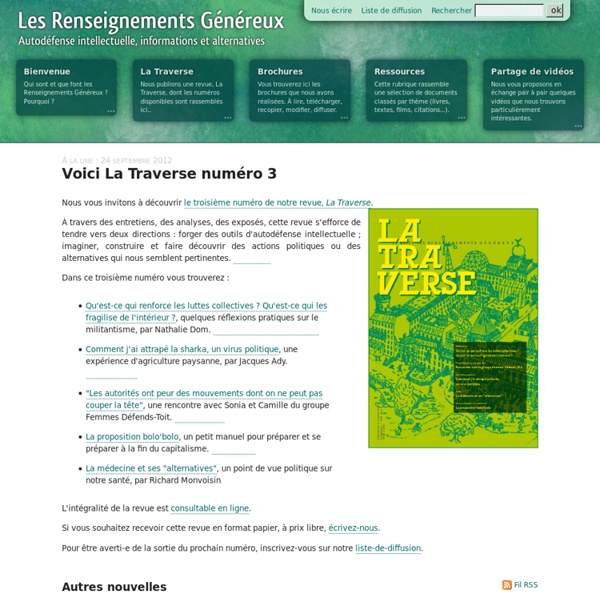 UTA Flight 772 Crash Information and Memorial Construction Photos A friend told me to go to a certain latitude and longitude on Google Maps. When I noticed it seemed to be in the middle of an African desert, I thought he was just sending nonsense. But when I zoomed in, my mind was blown. I noticed a tiny icon that looked like an airplane. So I did some more research and discovered there’s an incredibly tragic and beautiful story behind it. Terrorism, COINTELPRO, and the Black Panther Party An interview with law professor Angela A. Allen-Bell This past July, students from Northwestern University’s Medill Justice Project visited the infamous Louisiana State Prison known as Angola. While there, students landed an impromptu interview with Warden Burl Cain, where they asked him about an inmate at Angola named Kenny ‘Zulu’ Whitmore, who has now been in solitary confinement for 28 consecutive years. This important interview was cited afterwards by Time Magazine in an article examining the impact of solitary confinement on prisoners’ health. Zulu Whitmore is a member of the Angola Prison chapter of the Black Panther Party (BPP) that was first started in the early 1970s by Herman Wallace and Albert Woodfox of the Angola 3.

The black Victorians: astonishing portraits unseen for 120 years The African Choir were a group of young South African singers that toured Britain between 1891 and 1893. They were formed to raise funds for a Christian school in their home country and performed for Queen Victoria at Osborne House, a royal residence on the Isle of Wight. At some point during their stay, they visited the studio of the London Stereoscopic Company to have group and individual portraits made on plate-glass negatives. That long-lost series of photographs, unseen for 120 years, is the dramatic centrepiece of an illuminating new exhibition called Black Chronicles II. “The portraits were last shown in the London Illustrated News in 1891,” says Renée Mussai, who has co-curated the show at London’s Rivington Place alongside Mark Sealy MBE, director of Autograph ABP, a foundation that focuses on black cultural identity often through the use of overlooked archives.

100 Ideas That Changed Architecture by Maria Popova How the art and science of building evolved along the parallel axes of the philosophical and the pragmatic. “Art is a discovery and development of elementary principles of nature into beautiful forms suitable for human use,” legendary architect Frank Lloyd Wright famously observed. The Moneyless Manifesto The Moneyless Man, Mark’s first book, is a personal story of his first year living completely without money. In it he relives the experience, describing why he initially felt compelled to do it; how he practically went about it; the physical, emotional and psychological challenges he faced; the liberation he experienced; how it felt, on a very personal level, to live without money in a world driven by the relentless need to make more of it; and the ways it changed his perspective on the world. Throughout the journey he offers up lots of tips and advice on how you can simultaneously reduce both your dependency on money and your ecological impact, whilst increasing your sense of connection and identity with the people in your community and the land under your feet. If you would like to buy a copy of The Moneyless Man in any one of fourteen languages, click here.

breath of life » HUGH MASEKELA / “Stimela Mixtape” HUGH MASEKELA / “Stimela Mixtape” Source: Breath of Life - (BoL Mixtape - July 26, 2010) “The coal train is a motherfucker.”—Hugh Masekela We’ve ridden these rails before, been all over these tracks (see here and here), the difference this time we’re taking the whole journey following the song over the years, grasping the politics behind the tones and textures and not just simply enjoying the melody and rhythms.

On a Beam of Light: The Story of Albert Einstein, Illustrated by the Great Vladimir Radunsky by Maria Popova The charming visual tale of an introverted little boy who grew up to become the quintessential modern genius. Given my soft spot for picture-book and graphic-novel accounts of famous lives, including Charles Darwin, Julia Child, Hunter S. [No-Vox] For the immediate release and dropping of all charges against SONO RYOTA An ardent anti-nuclear, pacifist militant, active in the defense of fundamental rights SEND THIS LETTER BY FAX : Fax of the Tokyo Courthouse: 81-3-3581-1583 Fax of the Tokyo Detention (...) >continue Nene Assetou Doumbia, a great lady, a great activist, founder of No Vox network in Mali and APELD (Association for spaces of freedoms and rights) has died suddenly. We would like to salute a great campaigner for human rights, women’s causes and for whom we had as everyone a deep respect and great friendship.

The Worth of Black Men, From Slavery to Ferguson Photo The paper, stained in spots, has yellowed, its black ink faded to a dull brown, but the horizontal lines printed on the page are still a fine blue. Some scribe took great care preparing this page, first dragging a piece of graphite along a straight edge to make two pairs of twin columns. Sometimes the pencil marks skip, disconnecting from the line before joining the page again. Once ordered, the table received its data: numbers rendered by hand but with a machinelike uniformity. Salvador Dalí Illustrates Alice in Wonderland, 1969 By Maria Popova UPDATE: At long last, a restored modern edition of this lost treasure. Also: the best illustrations from 150 years of Alice in Wonderland Last week, we marveled at Leonard Weisgard’s stunning illustrations for the first color edition of Alice in Wonderland, circa 1949.