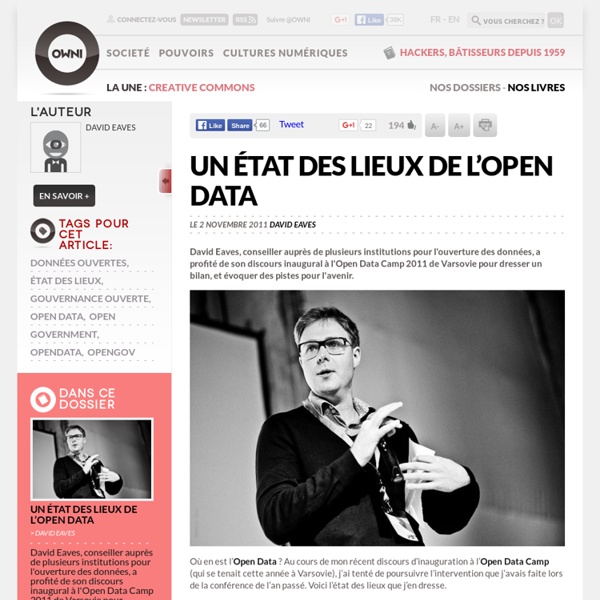 Map « Open Government Data This map is a starting point of mapping information around Open Government Data, initiatives, catalogues, competitions and events. This map is work in progress and not complete or comprehensive. The original source is from our friends at the semantic web company: Here is the original KML file Open Government Data on a Map Mapping Open Government Data Life as a Service I’m not actually a citizen of this country, I’m a subscriber. I was born on a rainy morning, the 20th of March 1965, 3:15 am on the outskirts of a big European city. There wasn’t much to do for me other than to drink my milk so I’m kind of surprised that I don’t remember the man with the contract that I signed within a few hours of being born. Stupid me. Anonymous vs. HBGary: the aftermath The RSA security conference took place February 14-18 in San Francisco, and malware response company HBGary planned on a big announcement. The firm was about to unveil a new appliance called "Razor," a specialized computer plugged into corporate networks that could scan company computers for viruses, rootkits, and custom malware—even malicious code that had never been seen before. Razor "captures all executable code within the Windows operating system and running programs that can be found in physical memory," said HBGary, and it then "'detonates' these captured files within a virtual machine and performs extremely low level tracing of all instructions." Certain behaviors—rather than confirmed signatures—would suggest the presence of malware inside the company. The HBGary team headed over early to the RSA venue at the Moscone Center in order to set up their booth on the exhibition floor. Nerves were on edge.

The State of Open Data 2011 by David Eaves April 16, 2014 LJ INFOdocket Information Industry News and Resources from Gary Price Announcing the Birmingham Hacks &amp; Hackers day If you are a journalist, blogger or developer interested in the possibilities of public data I’d be very happy if you came to a Hack Day I’m involved in, here in Birmingham on Friday July 23. The idea is very simple: we get a bunch of public data, and either find stories in it, or ways to help others find stories. You don’t need technical expertise because that’s why the hackers are there; and you don’t need journalistic expertise because that’s why the hacks are there. What I’m particularly excited about in Birmingham is that we’ve got a real mix of people coming – from press and broadcast, and local bloggers, and hopefully a mix of people with backgrounds in various programming languages and even gaming. And apart from all that there should be free beer and pizza.

Infographic Of The Day: Bloomberg And Frog Turn Raw Data Into Branding Bloomberg is a sprawling, multi billion-dollar enterprise, which creates a distinct problem if you’re trying to explain what the company actually does. They do lots of things, ranging from law research to sports research for team managers to, of course, stock-market data crunching. "Many people have a single association with Bloomberg, as a wire service or a market-data provider," says Jen Walsh, Bloomberg’s head of digital marketing. "We wanted our website to shine a light on other aspects of the business."