IdeaPaint: Turn Your Entire Office Into a Whiteboard 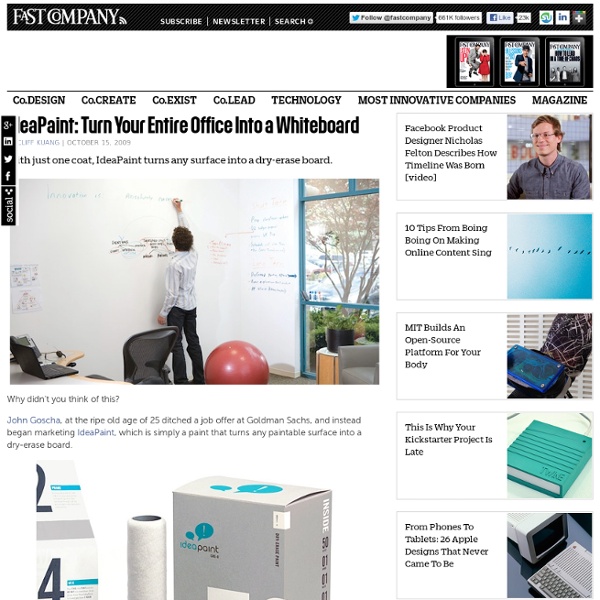 Why didn't you think of this? John Goscha, at the ripe old age of 25 ditched a job offer at Goldman Sachs, and instead began marketing IdeaPaint, which is simply a paint that turns any paintable surface into a dry-erase board. The benefit--besides being able to brainstorm on almost every inch of your office--is that the paint is half the cost of whiteboard and better-performing--you can leave marks up indefinitely, and they won't stain the wall. Of course, it takes a bit of time--you may have to sand the wall and prime it--but one other benefit is that you're not incurring all the carbon involved in manufacturing and shipping a whiteboard. [Inc. via Dieline]

Make Room! Cool Color-Changing Walls for Your Home « Dornob This may be the best room-changing design idea since interior house paint: forget your white living room walls, green bedroom or brown kitchen and bring your favorite rooms to life with these incredible, changeable and colorful do-it-yourself pixelated wall displays. Feeling dark? Switch from colorful rainbow patterns to a pitch black surface in seconds. Want a bit of a flavorful accent? Is This the Cheapest, Most Wacky-Looking Gestural Interface in the World? Gestural interfaces aren't quite mainstream yet, partly because they can be ruinously expensive--involving multiple cameras and custom detectors. But a student at MIT has devised one requires only a Webcam, and some crazy looking Lycra gloves that look like they'd be worn by hipsters from the future. The obvious forbear to this tech is the Sixth Sense system, also out of MIT, which relied on colorful bits of tape attached to your fingertips.

SWITL scoops oozy goop with amazing robotic precision (video) Look, sometimes, not often, but sometimes we'll miss a truly spectacular and mind bending story that requires a double-back. The SWITL robotic hand is just such a case. The patent-pending technology looks to have been revealed on video back in late October showing the Furukawa Kikou robot deftly lifting a ketchup and mayonnaise mess from a table and then replacing it unchanged from its original shape. The tech was developed for bakeries with the intention of automating the handling of soft substances that were either too malleable or too icky for human hands. Unfortunately, Furukawa Kikou isn't providing any details about the science behind SWITL so we'll just assume that it's Satan's work until otherwise informed.

How To Draw A Wave This art tutorial, kindly donated by surfing comic strip illustrator and surf artist Bob Penuelas covers how to draw a wave the Wilbur Kookmeyer way! If you're like me, then you've probably spent a lot of time in high school class daydreaming and doodling a thousand perfect cartoon waves in your notebook. It's safe to say that ninety percent of us surfers have a habit of scribbling perfect waves whenever a pencil is in our hands. Hopefully the following pointers will help you change your throw-away wave doodles into actual compelling artwork that you want to keep forever. Remember, there are millions of ways to draw a wave and hopefully with these simple pointers you'll find a million more.

30 Thrilling Open Plan Living Rooms with a View Designing an open floor plan can be a great way to make your living areas seem more spacious. What is the first aspect that comes to mind when thinking about modern living rooms? For us it’s openness. And since we already featured a post on Freshome showcasing 26 wonderful living room ideas, we decided to continue this amazing display with 30 open floor plan living rooms that are very much in agreement with the modern interior design trends. Not too long ago, our writer Ronique wrote a post called The Pros and Cons of Having an Open Floor Plan Home, where she mentioned how today the open floor plan is a sought after amenity in any home, as half walls and visual dividers allow a family to converse and interact. In this post we did not only gather interiors that have the ability to connect, but also fascinating rooms with a well defined personality and a highly appealing look.

An All Encompassing Future by Nokia Morph What would you like your cellphone to do? Try to come up with different ideas, solutions, and features then combine them into one cellphone concept, and you may agree with Nokia’s vision. The Morph cellphone of Nokia is not in production yet, but the ideas were put into an animated video. Basically, they envision a device using nanotechnology that enables a phone to morph for increased productivity and convenience. The Best Science Fiction Books (According to Reddit) Recently, someone asked Reddit for a list of the best science fiction books of all time. Being a fan of sci-fi, and wanting to expand my own reading list, I thought it would be helpful to tally the results and preserve them here for future reference. I've also included selected quotes from the comments, as well as my own notes on the books I've already read. PS: All book images in this post are copyright Amazon, and were retrieved using my Big Book Search Engine. So, without further ado, here are the Greatest Sci-Fi Books of All Time, ordered by upvote count: Dune

Japanese Museum Unveils A Giant Globe Made of 10,000 Live-Updating OLED Panels Geo-Cosmos If you want to see what Earth looks like from space, become an astronaut (or, barring that, a space tourist). For the next best view, pay a visit to Tokyo’s National Museum of Emerging Science and Innovation where a massive, nearly 20-foot spherical OLED orb--the world’s first large scale spherical OLED --offers a satellite’s-eye view of the planet in super high resolution. “Geo-Cosmos” is made up of 10,362 OLED panels that display continuously-updating satellite footage of our tiny blue marble, representing what our planet looks like from space in something close to realtime. It replaces an earlier model covered in LED panels, offering museum-goers a full 10 million pixels, a resolution 10 times greater than its predecessor. And like any good museum exhibit, Geo-Cosmos is interactive.

15 Free Guides That Really Teach You USEFUL Stuff Advertisement Over the past months, we’ve written quite a few PDF manuals for you, on all kinds of diverging subjects, including BitTorrent, iTunes, iPhone, Twitter, Mac, Linux, Photoshop and several other topics. Freely available to MakeUseOf subscribers, there are now multiple manuals released every month, for everyone to enjoy. After releasing 15 manuals and nearly half a million downloads we thought it was about time to look back and review what has been published so far.

The Collector’s Loft, Art Gallery and Living Space Combined We really appreciate the originality of this apartment design by UNStudio located in downtown Manhattan, New York. Called “The Collector’s Loft”, this beautiful home combines the elegance of an art gallery with the coziness of a common apartment. The owner wanted a special place for depositing his books and different artifacts he had collected throughout the years, a crib that would offer him the comfort of interacting with art. You can observe the outcome in the photos below but before you do, here is more information on this unusual house from the designers: “Gently flowing curved walls were introduced to virtually divide the main space into proportionally balanced spaces.