New contest for Toronto beach installations begins. REFERENCE LIBRARY: FURNITURE. MG_6182_1024x1024.jpg (1024×682) How to build a table on a budget. World's first Arctic arts festival to open for one year in northern Norway. Installation at the Salt arts festival in Sandhornøya. 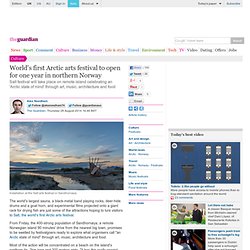 The world's largest sauna, a black-metal band playing rocks, deer-hide drums and a goat horn, and experimental films projected onto a giant rack for drying fish are just some of the attractions hoping to lure visitors to Salt, the world's first Arctic arts festival. From Friday, the 400-strong population of Sandhornøya, a remote Norwegian island 90 minutes' drive from the nearest big town, promises to be swelled by festivalgoers ready to explore what organisers call "an Arctic state of mind" through art, music, architecture and food. Most of the action will be concentrated on a beach on the island's northern tip, 2km long and 300 metres wide. 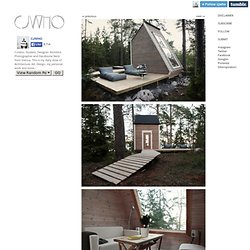 The Helinski dweller set out to create a cabin space of his own with minimal square footage, and a focus on keeping nature undisturbed. The end result is “Nido.” A fully functional tiny cabin at just under 100 square feet out in the middle of the woods. This small space features a micro-kitchen and upper sleep/storage space. CJWHO: facebook | twitter | pinterest | subscribe Post Info Posted on Wednesday 24 July 2013. 10 months ago. Tumblr_l2kl3d2UBu1qau50i.jpg 470×470 pixels. The Black Workshop. The Black Workshop. The Black Workshop. Kojimajunya - atTumb. Børge Mogensen - danish-furniture.com. Ny-svensk-sq.jpg (JPEG Image, 450 × 450 pixels) 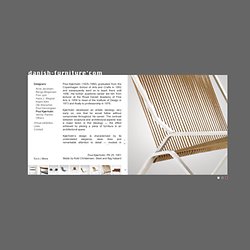 His further academic career led him from lecturer at the Royal Danish Academy of Fine Arts in 1959 to head of the Institute of Design in 1973 and finally to professorship in 1976. Kjærholm developed an artistic ideology very early on, one that he would follow without compromise throughout his career. Outdoor Kitchen by Studiomama. London Design Festival 2010: London designer Nina Tolstrup of Studiomama will present this mobile kitchen at 100% Design this week, alongside instructions for visitors to make their own. 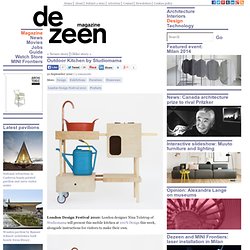 The project comprises a cart made of objects and materials that can be sourced at a hardware store. Kit-mod-marblebacksplash1-435.jpg (JPEG Image, 435×341 pixels) Yuria's Scrapbook. Vineet kaur. MG_6182_1024x1024.jpg (1024×682) I-BEAM DESIGN + ARCHITECTURE. The Pallet House project by I-Beam Design, was initially conceived as a transitional shelter for the refugees returning to Kosovo after the war.

These people needed an immediate alternative to the typical tent solution that could potentially transform into a new permanent home over time, even without access to sophisticated tools and materials. It has since become our aim to also develop the project as a more permanent housing solution to serve not only refugees in disaster stricken areas but also as a modular, prefabricated solution to affordable housing everywhere that can improve people's lives, the environment, society and even inspire greater diplomacy among the various cultures of the world. 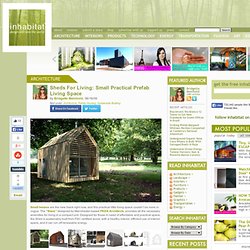 The “Shed,” designed by Manchester-based FKDA Architects, provides all the necessary amenities for living in a compact unit. Designed for those in need of affordable and practical space, the Shed is sustainably built from FSC certified wood, with a healthy interior, efficient use of interior space, and it can run off renewable energy. Deck Stairs. Open air or outside stairs, stairs to decks. 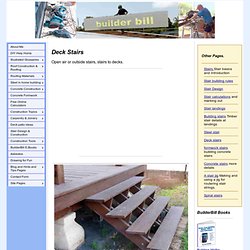 In the photo above because of the height being less than 1M. no handrails are needed which simplifies the construction. Www.alternativeconsumer.com/wp-content/uploads/Ross/2009/Jan_Feb_2009/metrocabin2_1.jpg. Plytube by Seongyong Lee. Royal College of Art graduate Seongyong Lee has developed a process for making wooden tubes from veneer, which he uses to make lightweight furniture. 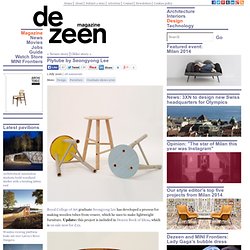 Update: this project is included in Dezeen Book of Ideas, which is on sale now for £12. Called Plytube, the project employs a process similar to that used in making cardboard tubes, with the laminates wrapped around and hardened with glue. Lee developed hollow joints transforming the material into a series of tables and stools. The Royal College of Art Show Two continues until 4 July. Peg by Studio Gorm. Oregon designers John Arndt and Wonhee Jeong Studio Gorm are exhibiting their Shaker-inspired Peg furniture system at the Direktorenhaus art space in Berlin. 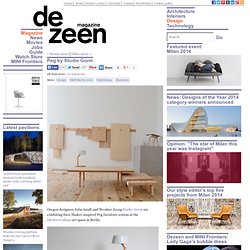 The set comprises wooden tables and benches that can be dissembled and hung on the wall when not in use. The legs screw into each table top or seat and attach to the wall-mounting with magnets. Legs and tops are interchangeable, creating different-sized furniture pieces as needed. The exhibition opened to coincide with DMY Berlin earlier this month and continues until August. Flow2 kitchen by Studio Gorm. Oregon designers John Arndt and Wonhee Jeong of Studio Gorm have designed a kitchen where waste products are used to grow plants. 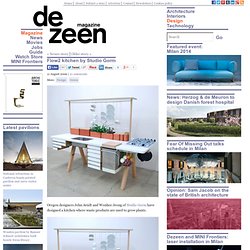 Drying dishes drip onto plants in terracotta containers. Food scraps are broken down by worms and the resulting fertiliser used is for the plants. A double-walled terracotta container acts as a refrigerator, cooling the inside as water evaporates through the outer wall. The project is on show as part of and exhibition called Call and Rersponse at the Museum of Contemporary Craftin Oregon until 31 October. Permanent Camping by Casey Brown Architecture. This small house located in Australia is designed by Casey Brown Architecture. 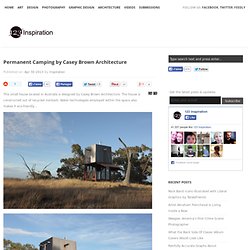