Products - Formr. 15 Best Online Furniture Stores 2021. Courtesy A hypothetical situation: After four years of crashing on twenty-semesters-used bunk beds, handmewaydown twin frames, dumpster-dived platforms, and a mattress on a bare floor, you graduated college and prepared yourself for an adult life of good living. 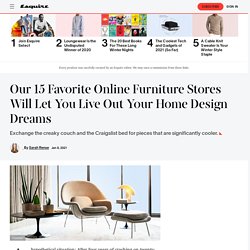 Then, some number of years passed—maybe three, maybe thirty—and it occurred to you that you haven't exactly achieved the home-owning or apartment-renting dream. That couch you're sitting on was the cheapest at Ikea, that bedframe came secondhand on Facebook Marketplace, and you up and bought the dining set after about two seconds of consideration at Target. And once you got them, you never really considered replacing them. Then, perhaps after months-on-end in your home and only your home, you were revisited by that dream of the good life, which got you thinking about owning furniture to be proud of, and owning it for a long time. T Sakhi's Reconciled Fragments tables emulate decomposing matter. Beirut studio T Sakhi has designed a collection of green-hued coffee tables using resin, brass powder and marble offcuts to create the effect of "looking through a microscope". 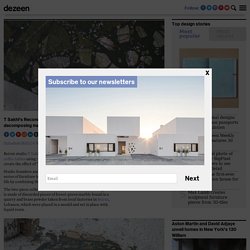 Studio founders and sisters Tessa and Tara Sakhi created the series of furniture to give waste and fragmented materials a new life by combining them with a unifying component. The two-piece collection of tables, called Reconciled Fragments, is made of discarded pieces of forest-green marble found in a quarry and brass powder taken from local factories in Beirut, Lebanon, which were placed in a mould and set in place with liquid resin. According to the sisters, this combination of materials emulates decomposing matter, with the resin being chosen to convey a sense of depth and transparency.

The duo described the resulting effect as being "like looking through a microscope. " Japan house exhibits traditional japanese woodcraft from the hida region in los angeles. Japan house los angeles presents hida | a woodwork tradition in the making, a new exhibition that brings japanese woodcraft from its spiritual homeland of the hida region of japan to los angeles for the first time. on display from january 16 through april 12, 2020, the exhibition invites visitors to discover the legendary craftsmen of hida and their design legacy today, embodied in the work of century-old furniture maker hida sangyo co., ltd. displays highlight regional specialties such as hida-shunkei lacquerware, ichii wood carving (ichii itto bori — japanese yew carving), and mageki (wood bending), as well as materials, prototypes, and products developed by hida sangyo and its frequent collaborations with some of the world’s top contemporary designers, such as enzo mari and sori yanagi. all images © japan house los angeles. 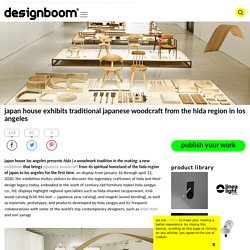 Fantoni atelier collection flexibly yet unobtrusively fits your office. With the new atelier collection, italian manufacturer FANTONI is launching a highly flexible, functional and elegant working environment for the office of tomorrow. it could be that employees won’t want to take holidays anymore. the versatile atelier collection’s sleek, understated collaborative table an office layout that isn’t flexible, can’t be reconfigured, and artificially confines employees to a fixed workstation is anathema to fantoni. 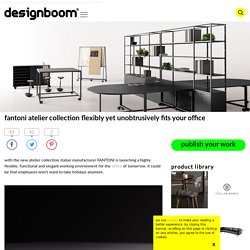 403 Not Allowed. Gensler designs modular furniture system to enable "reconfigurability in the workplace" Using its own London office as a case study, architecture firm Gensler has created a modular furniture range for Fantoni in response to a trend for more flexible and collaborative workplaces. 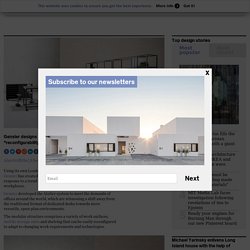 Gensler developed the Atelier system to meet the demands of offices around the world, which are witnessing a shift away from the traditional format of dedicated desks towards more versatile, open-plan environments. The modular structure comprises a variety of work surfaces, mobile storage units and shelving that can be easily reconfigured to adapt to changing work requirements and technologies. The system's intelligent design earned it a place on the longlist for the Dezeen Awards 2019, where it features in the Workplace design category alongside a collection by Jaime Hayon that aims to merge domestic and commercial design values, and a seating system that doubles as a workstation by Barber and Osgerby.

Gensler began working on Atelier after deciding to relocate its London office. 6 Best-Performing Kitchen Appliance Packages For Every Budget. Perfect Pairings: These Record Players and Consoles Are a Match Made in Heaven. Audiophiles will agree—playing music on vinyl beats out digital streaming any day. 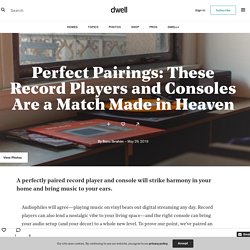 Record players can also lend a nostalgic vibe to your living space—and the right console can bring your audio setup (and your decor) to a whole new level. To prove our point, we’ve paired an array of record players in different shapes, sizes, and colors with the consoles that best suit—where you're looking for a vintage, minimalist, or avant-garde aesthetic. Modern Marbling Newsletter Join the Daily Dose Newsletter Get carefully curated content filled with inspiring homes from around the world, innovative new products, and the best in modern design Project 62 Hafley Two Drawer Console Table Add the finishing touch to your space with the Two-Drawer Console Table from Project 62™. 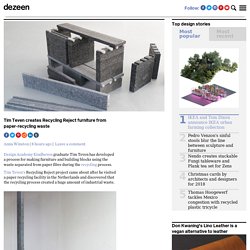 Tim Teven's Recycling Reject project came about after he visited a paper recycling facility in the Netherlands and discovered that the recycling process created a huge amount of industrial waste. A large number of fibres, such as plastic and wood, are separated from the paper and collected as waste known as screen waste. Teven decided to focus on finding a way to reuse this material to create building blocks that could be used to create furniture and other objects. "I saw a place to introduce this industrial waste back into the life of the people that create the waste without even knowing it," he told Dezeen. "The process involves fairly simple steps, which are energy efficient and don’t use too many resources," said Teven. Harow Apollo 11 Resin Fiberglass Moon Surface Table. French design brand Harow seem to hit all the pop-culture sweet spots with their furniture and collectibles: their arcade game-inspired sofas were bucket-list material at first sight when they passed through our newsroom, and now they’ve made an equally creative coffee table to pair with it. 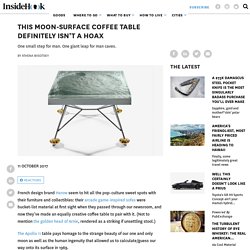 (Not to mention the golden head of Arnie, rendered as a striking if unsettling stool.) The Apollo 11 table pays homage to the strange beauty of our one and only moon as well as the human ingenuity that allowed us to calculate/guess our way onto its surface in 1969. The chunky design features accurate lunar topography, which the designers sourced from NASA’s own digital files. Interchangeable desk modules meet the changing needs of home/office workers. The main building blocks of the Modulos system are the Basic and Rounded modules – a simple flat square and a rounded corner block. 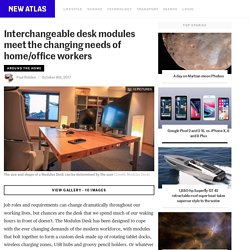 Custom desk assemblers can also choose to add a module with a hole for cables to slot through, a static or rotating tablet dock, a block with integrated USB ports, a module with a stylish metal power disk in the center, a wireless charging square and a module that helps prevent pens/pencils from rolling off the desk just when they're needed.

All of the 13.8 x 13.8 inch (35 x 35 cm) desktop modules are made from Croatian wood and are connected together using wooden and metal pins, in a similar manner to self assembly furniture bought from the likes of Ikea. There are a number of connection slots on the under side of each module, along with slots for wooden or aluminum legs. The crowdfunding campaign has reached its goal, with a few days left to run. Block Noise Around Your Desk with These Mountable Acoustic Panels. Welcome to Newageproducts. 10 Incredibly Cool Shelves (cool shelves, unique shelves, unusual shelves) Jaguar Shelf This is a real Jaguar that's been gutted of its heavier parts and hung on a wall to serve as a shelf. 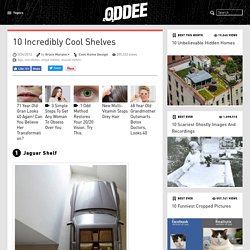 Why? No clue. I guess that's what rich people do. (Source | Via) Elementa's UN Divided furniture adapts to changing office spaces. Oslo design studio StokkeAustad has created a modular furniture system for Norwegian brand Elementa that can be easily expanded for changing workspaces. The minimal UN Divided furniture rests on a trestle base made from tubular steel, which can be adapted to support any size or shape tabletop. By changing angles, or combining several trestles, the furniture can be transformed into storage and shelving of various heights.

Designed for workers that often move offices or companies in the midst of expanding, the framework can also be folded up and stacked for storage when not in use. "Workers of today do not need loads of closed storage or complicated cable management," said StokkeAustad's Jonas Stokke. "Simple, functional and adaptable solutions with clean surfaces are the way forward, we feel.

The Resolute Desk is the greatest of the presidential desks. (Photo: Pete Souza/Public Domain) Come this time next year there will be a new president in the White House. Whoever that person ends up being, they will immediately have to make some big, impactful decisions. Choice number one: What desk to use in the Oval Office? There have only ever been six desks to pass through this room, each chosen by the president who must use it for business that could change the world. 6. George H.W. Spending only one term in the Oval Office, literally serving under President H.W.

The utilitarian desk was first built in 1920 by the Chesapeake and Ohio Railway (C+O), to be used as one of the company owners’ personal desks. The Kin Collection: Cabinets for Compact Quarters: Remodelista. Mathias Hahn calls his Kin collection, “a family of cabinets.” And like most clans, his comes in a range of kindred shapes and sizes. Or, as he puts it, “Each has its own character and yet harmonizes perfectly with its siblings.”

Hahn trained in industrial design in his native Germany before studying under Ron Arad at London’s Royal College of Art. He received the 2010 German Design Award as Newcomer/Finalist and has his own London studio with a client roster that includes Ligne Roset, Kvadrat, and Another Country. Focal Locus workstation splits the difference between sitting and standing. With digital technology making its presence felt in an increasing number of fields, more and more people are finding that their formerly somewhat-active jobs now entail their sitting at a computer all day. Unfortunately, as most of us are by now aware, sitting for long periods of time has been shown to significantly raise a person’s chances of dying from cardiovascular, metabolic, or other types of disease.

While stand-up work stations have been offered as an alternative, standing for too long can also take a toll on our well-being. Focal Upright Furniture has attempted to reached a best-of-both-worlds middle ground, however, with its new Locus work station. The Locus consists of two parts, the desk and the seat. CrossOver motorized standing desk gives old workstations a powerlift. What goes up must come down, and standing desks operating at the mercy of indecisive office workers are no different. There's plenty of mechanically adjustable desks designed to lighten the load for tired typists, and now office furniture specialist NextDesk wants to give your standard cubicle the same versatility.