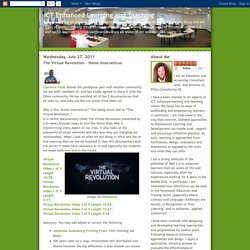 He has watched all of the 5 documentaries that he links to, and pulls out the key points from them all. Who is this "Homo Interneticus"? From Gutenberg to the Internet: A Comparison of the Impact of Gutenberg Printing Press and the Internet as Media Technologies by Juwairiah Ahmed on Prezi. The Virtual Revolution - Webgrrl. Een geweldige documentaire van de BBC uit 2010 over de impact van internet op de wereld. 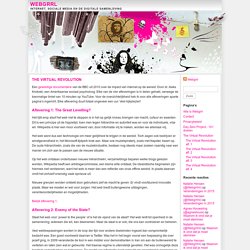 Het web werd dus een technologie om meer gelijkheid te krijgen in de wereld. Nerds Central: The Virtual Revolution: The Is Not How I Remember It. The Virtual Revolution has been an interesting series and all credit to those involved for creating a program about an IT subject, so long a taboo in TV circles it would seem. 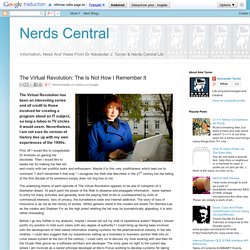 Nevertheless, I am not sure its version of history ties up with my own experiences of the 1990s: First off I would like to congratulate Dr Krotoski on gaining her doctorate. Then I would like to berate her for making me feel old and crusty with her youthful looks and enthusiasm. Maybe it is this very youthfulness which lead me to comment "I don't remember it that way. " The Virtual Revolution, BBC Two. If I wanted to be solipsistic about this, I could say that the opening episode of The Virtual Revolution, the new BBC Two series about the changes wrought by the internet, is also the story of theartsdesk.com. 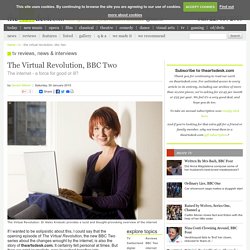 It certainly felt personal at times. But then we print journalists, now launched together into cyberspace, are but one (very important, naturally) sub-atomic particle of what is variously described here as "the fastest change since the Industrial Revolution" and "the most exciting development since Gutenberg".That Gutenberg remark was made by disenchanted Twitterer Stephen Fry – just one of the pace-setters, enthusiasts, entrepreneurs and agnostics interviewed during the course of an admirably intelligent and lucid opener by writer-presenter Aleks Krotoski.

Al Gore, Bill Gates, Steve Wozniak (Apple), Jimmy Wales (Wikipedia), Mark Zuckerberg (Facebook) and Chad Hurley, co-founder of YouTube, also made time for Krotoski, a long-term (print) chronicler of the digital age. The Virtual Revolution. The Virtual Revolution. In this documentary Dr Aleks Krotoski looks at how 20 years after the invention of the World Wide Web, every aspect of our lives is being influenced. 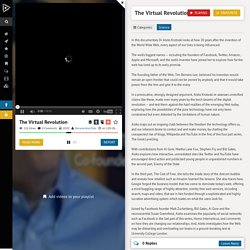 The web’s biggest names – including the founders of Facebook, Twitter, Amazon, Apple and Microsoft, and the web’s inventor have joined her to explore how far the web has lived up to its early promise. The Virtual Revolution - Homo Interneticus. Clarence Yates shared this prodigious post with another community we are both members of, and kindly agreed to share it with the Ethos community. 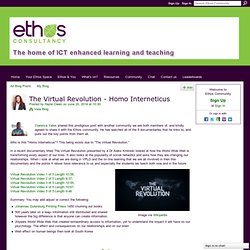 He has watched all of the 5 documentaries that he links to, and pulls out the key points from them all. Who is this "Homo Interneticus"? Matthew Wittering - The Virtual Revolution: 1 - The Great Levelling? The Internet has in the last 20 years facilitated an explosive growth in technical capabilities and access to knowledge. 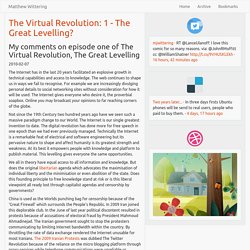 The web continues to shape us in ways we fail to recognise. For example we are increasingly divulging personal details to social networking sites without consideration for how it will be used. The Internet gives everyone who desire it, the proverbial soapbox. Online you may broadcast your opinions to far reaching corners of the globe. Not since the 19th Century two hundred years ago have we seen such a massive paradigm change to our World. We all in theory have equal access to all information and knowledge. China is used as the Worlds punching bag for censorship because of the ‘Great Firewall’ which surrounds the People's Republic. Those who seek to control information do so to control and oppress. BBC.The.Virtual.Revolution.1of4.The.Great.Levelling. The Virtual Revolution. Virtual Revolution (@BBCDigRev) The Virtual Revolution.

The Virtual Revolution Twenty years on from the invention of the world wide web, this major new series takes stock of its profound impact – how, for better and for worse, the digital revolution is reshaping our lives. 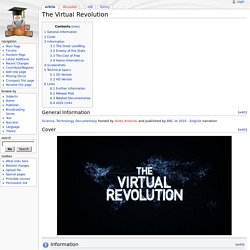 Over four themed episodes that criss-cross the globe, journalist and academic Dr Aleks Krotoski explores the meaning of a phenomenon that is transforming everything, from how we learn to how we shop, vote and make friends. With a quarter of the planet connected so far, this series examines what is in store for the remaining 75 per cent of the world's population as they come online. [edit] The Great Levelling In the first in this four-part series, Aleks charts the extraordinary rise of blogs, Wikipedia and YouTube, and traces an ongoing clash between the freedom the technology offers us, and our innate human desire to control and profit. Dr Aleks Krotoski looks at how it is reshaping almost every aspect of our lives. Books and Films - The Virtual Revolution (BBC documentary presented by Aleks Krotoski)