Just Sweet and Simple: Free Printable United States Declaration of Independence. With Memorial Day and the 4th of July coming up I have began some Patriotic Projects. 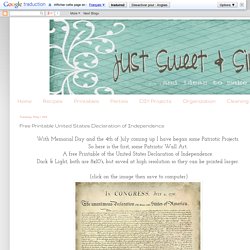 So here is the first, some Patriotic Wall Art. A free Printable of the United States Declaration of Independence. Dark & Light, both are 8x10's, but saved at high resolution so they can be printed larger. (click on the image then save to computer) keywords: fourth of July decorations, free fourth of July downloads & printables, free declaration of independence printable & picture, Memorial Day, Patriotic Art, free wall art. Brosius, T. / Declaration of Independence WebQuest. 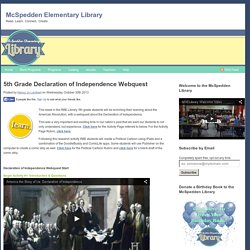 This was a very important and exciting time in our nation’s past that we want our students to not only understand, but experience. Click here for the Activity Page referred to below. For the Activity Page Rubric, click here. Following this research activity RBE students will create a Political Cartoon using iPads and a combination of the DoodleBuddy and ComicLife apps. Young Teacher Love: Role Playing with the American Revolution {Freebies Included}! Social studies has always been one of my absolute favorite subjects to teach. 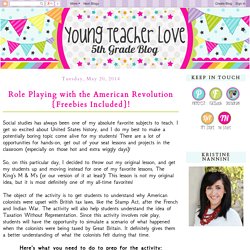 I get so excited about United States history, and I do my best to make a potentially boring topic come alive for my students! There are a lot of opportunities for hands-on, get out of your seat lessons and projects in the classroom (especially on those hot and extra wiggly days)! So, on this particular day, I decided to throw out my original lesson, and get my students up and moving instead for one of my favorite lessons, The King's M & M's (or our version of it at least)! This lesson is not my original idea, but it is most definitely one of my all-time favorites! Unit 5 Revolution. Jan 20 The Revolutionary War came to an official end when the British were invited to Paris France to sign an official end of hostilities 1783. 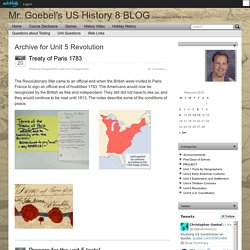 The Americans would now be recognized by the British as free and independent. They still did not have to like us, and they would continue to be mad until 1813. Beaulieu, Derek / Road to Revolution Handouts. Fifth Grade. 5th Grade Revolutionary War. American Revolution Webquest. Process Investigative teams will be assigned one of the following events: The Sugar Act (1764) The Currency Act (1764) The Stamp Act and Stamp Act Congress (1765) The Townshend Act and Circular Letter (1767) The Massacre (1770) Tea Act and Tea Party (1773) Intolerable Acts (1774) First Continental Congress (1774) Your team will be divided into the following roles: Investigator #1: Summarize an unbiased report of the facts surrounding the event. 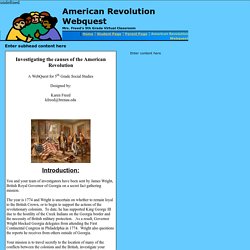 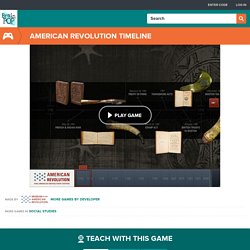 Bet You Didn't Know: Revolutionary War Video - American Revolution History. VA Studies - Cool Stuff in VA. The Declaration of Independence. The unanimous Declaration of the thirteen united States of America hen in the Course of human events it becomes necessary for one people to dissolve the political bands which have connected them with another and to assume among the powers of the earth, the separate and equal station to which the Laws of Nature and of Nature's God entitle them, a decent respect to the opinions of mankind requires that they should declare the causes which impel them to the separation. 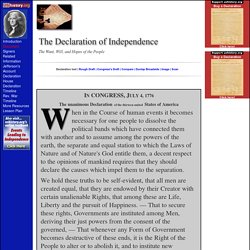 He has refused his Assent to Laws, the most wholesome and necessary for the public good. He has forbidden his Governors to pass Laws of immediate and pressing importance, unless suspended in their operation till his Assent should be obtained; and when so suspended, he has utterly neglected to attend to them. He has called together legislative bodies at places unusual, uncomfortable, and distant from the depository of their Public Records, for the sole purpose of fatiguing them into compliance with his measures. Primary Source Collection. American Revolution. Learn about Causes of the American Revolution. Paul Revere Facts - American Revolution. Before George Washington was famous, back when he was a scrappy and serious young man, the governor of Virginia sent him into the wilderness to tell a group of French settlers that they were trespassing on Virginian land. 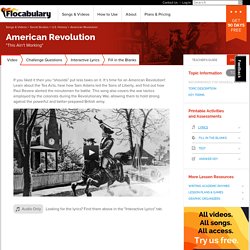 The French greeted the young traveler, invited him in, and that night got so drunk on brandy that they let slip they had no intention whatsoever of leaving. The sober young Virginian headed back to his home and wrote a report of his adventure. He was then put in charge of a militia and sent back to the wilderness to force the French out. Virginia Studies: SOL VS.5a Reasons for War : Revolutionary War - SOL Teacher Store. American Revolution....My FAVORITE!!!! It's the most wonderful time of the year!! 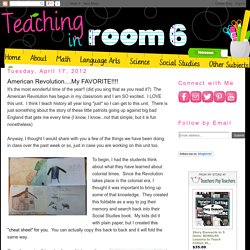 (did you sing that as you read it?) The American Revolution has begun in my classroom and I am SO excited. I LOVE this unit. I think I teach history all year long *just* so I can get to this unit. There is just something about the story of these little patriots going up against big bad England that gets me every time (I know, I know...not that simple, but it is fun nonetheless) Anyway, I thought I would share with you a few of the things we have been doing in class over the past week or so, just in case you are working on this unit too. To begin, I had the students think about what they have learned about colonial times.

Since I am using this not only as a history unit, but a language arts as well, I have been doing quite a bit of comprehension work with the stories and books we are reading. By Ann Rossi. Mr. Werner's Fifth Grade Website! Unit 4 explores the struggles of the American colonists to gain independence from Britain. 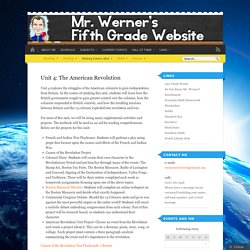 In the course of studying this unit, students will learn how the British government sought to gain greater control over the colonies, how the colonists responded to British controls, and how the resulting tensions between Britain and the 13 colonies exploded into revolution and war. For most of this unit, we will be using many supplemental activities and projects. The textbook will be used as an aid for reading comprehension. Below are the projects for this unit: American Revolution Videos « American Revolution Videos «