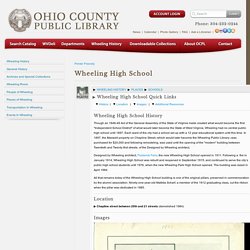 Each ward of the city had a school set up with a 12 year educational system until this time. Wheeling Hospital. Wheeling Hospital, called the mother hospital of West Virginia because of its early founding, was chartered March 12, 1850. 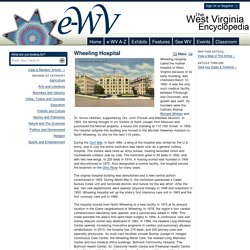 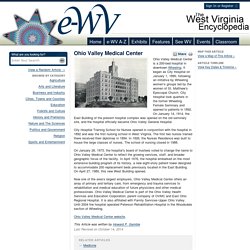 It began as City Hospital on January 1, 1890, following an initiative by Wheeling women’s groups led by the women of St. Matthew’s Episcopal Church. City Hospital took quarters in the former Wheeling Female Seminary and opened to patients in 1892. On January 14, 1914, the East Building of the present hospital complex was opened on the old seminary site, and the hospital officially became Ohio Valley General Hospital. Chronicle - new life to Old Building. Wheeling History > Market Auditorium. The Market Auditorium, located on Market Street spanning the space from 10th to 11th Street, replaced the old 2nd Ward Market House, which was razed in 1911. 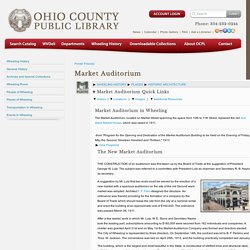 -from "Program for the Opening and Dedication of the Market Auditorium Building to be Held on the Evening of Friday, May the Second, Nineteen Hundred and Thirteen," 1913. (▶ View Program) THE CONSTRUCTION of an auditorium was first taken up by the Board of Trade at the suggestion of President George W. Lutz. The subject was referred to a committee with President Lutz as chairman and Secretary R. Wheeling History > German Bank. The German Bank of Wheeling The German Bank of Wheeling started in business April 1, 1870 with a capital of $50,000. 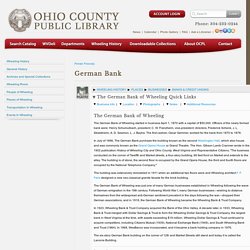 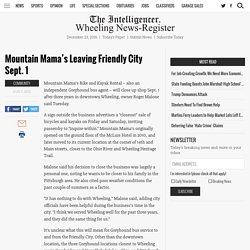 A sign outside the business advertises a “closeout” sale of bicycles and kayaks on Friday and Saturday, inviting passersby to “inquire within.” Mountain Mama’s originally opened on the ground floor of the McLure Hotel in 2010, and later moved to its current location at the corner of 14th and Main streets, closer to the Ohio River and Wheeling Heritage Trail. Malone said his decision to close the business was largely a personal one, noting he wants to be closer to his family in the Pittsburgh area. He also cited poor weather conditions the past couple of summers as a factor. “It has nothing to do with Wheeling,” Malone said, adding city officials have been helpful during the business’s time in the city. It’s unclear what this will mean for Greyhound bus service to and from the Friendly City. 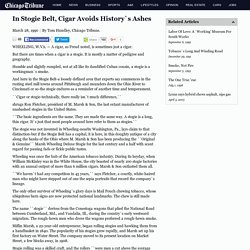 WHEELING, W.VA. — A cigar, as Freud noted, is sometimes just a cigar. But there are times when a cigar is a stogie. It is mostly a matter of pedigree and geography. Humble and slightly rumpled, not at all like its dandified Cuban cousin, a stogie is a workingman`s smoke. And here in the Stogie Belt-a loosely defined area that experts say commences in the rusting steel mill towns around Pittsburgh and meanders down the Ohio River to Cincinnati or so-the stogie endures as a reminder of another time and temperament.

``Cigar or stogie-technically, there really isn`t much difference,`` shrugs Ron Fletcher, president of M. Historic National Road. Elm Grove Is Defined By Its Uniqueness - Weelunk. By Steve Novotney Weelunk.com (Editor’s Note: This is the second in a series of articles that will include profiles on each of Wheeling’s established neighborhoods.) 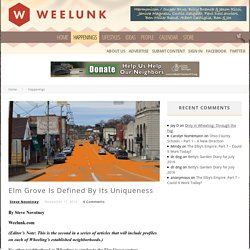 Proud "Island Rats" Living on Wheeling Island - Weelunk. By Steve Novotney Weelunk.com (Editor’s Note: This is the fourth in a series of articles that will include profiles on each of Wheeling’s established neighborhoods.) 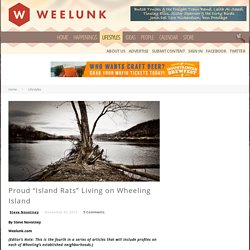 It was intended to be derogatory and sarcastic – maybe even mean. “Island Rat.” Wheeling History > Wheeling Cigar and Tobacco Industry, 1886. - from The Wheeling Daily Intelligencer, September 14, 1886 Fifty Millions of Cigars of all Grades Made in Wheeling and its Neighborhood. 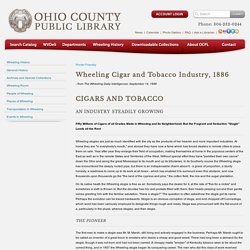 But the Fragrant and Seductive "Stogie" Leads all the Rest Wheeling stogies are just as much identified with the city as the products of her heavier and more important industries. At home they are "in everybody's mouth," and abroad they have now a fame which has forced dealers in remote cities to place them on sale. Demolition uncovers Mail Pouch ad. Pa. communities often turn to merger or consolidation to ease financial strains. By Richard Gazarik | Monday, Feb. 11, 2013, 12:11 a.m. Two years ago, Fallston Borough in Beaver County spent nearly half its $108,000 budget to repair one road. Officials in the municipality of 266 residents began talking about a merger with neighboring Patterson Township, which provided police protection for Fallston under a shared-services agreement. Officials in both communities thought a merger made good financial sense. Mayor Livio Pagani did not. He vetoed council's decision to proceed.

Wheeling History > A Wheeling Suspension Bridge Tour. - by Dr. Emory Kemp The history of the Wheeling Suspension Bridge is intimately involved in the history of Wheeling and must be viewed in terms of a national emphasis on what was then called "internal improvements," which meant the construction of a network of transportation systems to join the untapped natural resources of the Midwest with the commercial centers on the eastern seaboard. One of the earliest advocated for "internal improvements" was Albert Gallatin, who as Secretary of the Treasury published his influential report on roads and canals in 1808. Bridgeport Bridge (Ohio River) The Bridgeport Bridge also known as the Wheeling and Belmont bridge (per the dedication plaque affixed to the structure) was a bridge which once carried U.S.

Route 40 (US 40) over the back channel of the Ohio River between Wheeling Island, West Virginia, and Bridgeport, Ohio. The steel-framed bridge, with a wooden deck, was built in 1893 to replace a prior wooden covered bridge that was built on the same site circa 1836. In fact, the 1893 bridge utilized the same piers that were built for the earlier bridge.

The primary reason for construction of the new bridge was to accommodate the new electric street cars that were being deployed in Wheeling. Wheeling Suspension Bridge. The Wheeling Suspension Bridge is a suspension bridge spanning the main channel of the Ohio River at Wheeling, West Virginia. It was the largest suspension bridge in the world from 1849 until 1851. It was designed by Charles Ellet Jr., who also worked on the Niagara Falls Suspension Bridge. The Wheeling bridge was the first to span the Ohio River, and was an important link on the National Road. The main span is 1,010 feet (310 m) from tower to tower. Fort Henry Bridge. Answer three questions and help us improve Wikipedia. Thanks for the feedback! We are using it to make Wikipedia even better!

Nail City Brewery Nail City Brewery, the predecessor to Schmulbach Brewery, was formed in 1861 by Frank Zeigler at 33rd and Wetzel Street.4 5 Several cellars for the beer were dug into the hillside that extended for 400 feet. There was also a fermentation cellar, measuring 60 feet by 30 feet, mash tubs, boiler and a cooler, the latter which was 18 feet by 19 feet and was purchased at the Centennial for $1,000.5 Two inch pipes made it possible to cool 60 barrels per hour with water coming from an adjacent spring.