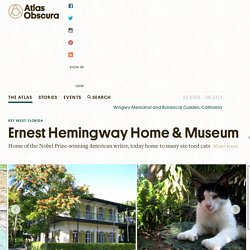 But the house on Whitehead Street in Key West was of particular importance, both in Hemingway's personal life and in his literary development. When Hemingway moved from Paris to Key West in the mid-1920s, on the advice of fellow writer John Dos Passos, he was a well-known author but not yet a legend. The house was given to him by the uncle of his second wife--at the time, Hemingway probably could not have purchased it himself. It was in this ornate, Spanish-style house that Hemingway wrote his 1929 novel "A Farewell to Arms," as well as parts of "Death in the Afternoon," "Green Hills of Africa," and "For Whom the Bell Tolls. " The house is filled with Hemingway memorabilia from the more than 20 years in which he occupied the house. On a slightly odder level, the estate is also home to over 60 cats, with names like Pablo Picasso, Hairy Truman and Audrey Hepburn. 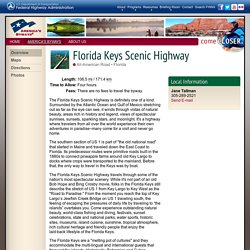 Surrounded by the Atlantic Ocean and Gulf of Mexico stretching out as far as the eye can see, it winds through vistas of natural beauty, areas rich in history and legend, views of spectacular sunrises, sunsets, sparkling stars, and moonlight. It's a highway where travelers from all over the world experience their own adventures in paradise--many come for a visit and never go home. The southern section of US 1 is part of "the old national road" that started in Maine and traveled down the East Coast to Florida.

Its predecessor routes were primitive roads built in the 1880s to connect pineapple farms around old Key Largo to docks where crops were transported to the mainland. The Best of Key West. Mallory Square The center of Key West's historic waterfront, where Key West originally became a bustling seaport, Mallory Square offers exciting attractions, unlimited shopping, and sunset celebrations. 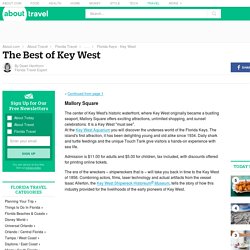 It is a Key West "must see". At the Key West Aquarium you will discover the undersea world of the Florida Keys. The island's first attraction, it has been delighting young and old alike since 1934. Daily shark and turtle feedings and the unique Touch Tank give visitors a hands-on experience with sea life. Admission is $11.00 for adults and $5.00 for children, tax included, with discounts offered for printing online tickets. The era of the wreckers – shipwreckers that is – will take you back in time to the Key West of 1856. The Museum is open 9 a.m. to 4:30 p.m. daily with shows every 45 minutes. Along the original shoreline you will find the Key West Historic Memorial Sculpture Garden. Mallory Square is well known as a shopper's paradise. Key West Florida Cruise Travel Tips. A shopping street near the cruise port in Key West, Fla. 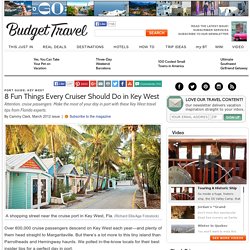 (Richard Ellis/Age Fotostock) Over 600,000 cruise passengers descend on Key West each year—and plenty of them head straight to Margaritaville. But there’s a lot more to this tiny island than Parrotheads and Hemingway haunts. We polled in-the-know locals for their best insider tips for a perfect day in port. Key West Eco-ToursFree in-town pickupOn a kayak tour of the Florida Keys National Marine Sanctuary, you can see eye to eye with an egret and paddle past leatherback turtles and tropical fish. javacatcharters.com, half-day trip from $75. NADENE GROSSMAN ORR Owner, We’ve Got the Keys event planningMATTHEW HELMERICH Executive Director, Tropic CinemaKEVIN MCGINTY Owner, Key West Hideaways vacation rentalsJOE WEATHERBY Director of Marketing, Reefmakers artificial reefs Note:This story was accurate when it was published.

A Low-Key Drive in Florida. View of Islamorada, Florida Keys, USA (Juan Moyano / Dreamstime.com) Living in Miami Beach, Fla., undeniably has its charms, but sometimes I need a break from international supermodels and Armani-clad valets. 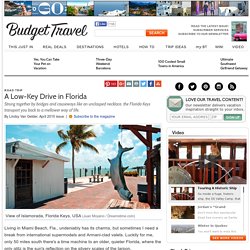 Luckily for me, only 50 miles south there's a time machine to an older, quieter Florida, where the only glitz is the sun's reflection on the silvery scales of the tarpon. Key West. © Sheldon Kralstein Key West's whitesand beaches and crystal clear waters are perfect for relaxing under the sun and snorkeling amongst tropical fish. 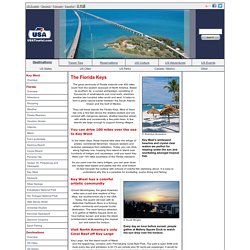 The great peninsula of Florida extends over 400 miles south from the eastern seacoast of North America. Below its southern tip, a curved archipelago, consisting of thousands of small islands and coral reefs, stretches another two hundred miles south and west. It helps to form a great natural barrier between the South Atlantic Ocean and the Gulf of Mexico.

They call these islands the Florida Keys. You can drive 100 miles over the sea to Key West In the olden days, these tropical isles were the refuge of pirates, commercial fishermen, treasure seekers and reclusive castaways from civilization. As you pass over the many bridges, you can peer down into crystal clear waters and plainly see the coral bottom 20 feet beneath the surface with schools of colorful fish swimming about.