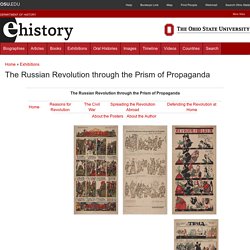 Open Websites. Thousands of Australian students are taught that robots led the Russian Revolution. Kinja is in read-only mode. 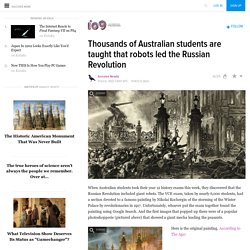 We are working to restore service. Holy crap you're right! It's not a revolution, it's an invasion! More from the 1905-1906 Russian Underground Press. A few months back I posted images from 1905-1906 Russian revolutionary periodicals that I found at Yale University’s digital library. 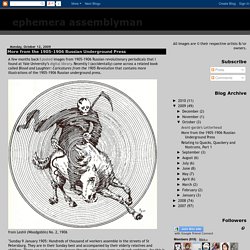 Recently I (accidentally) came across a related book called Blood and Laughter: Caricatures from the 1905 Revolution that contains more illustrations of the 1905-1906 Russian underground press. from Leshii (Woodgoblin) No. 2, 1906 "Sunday 9 January 1905: Hundreds of thousand of workers assemble in the streets of St Petersburg. They are in their Sunday best and accompanied by their elderly relatives and children. There are no banners or slogans though some carry icons or church emblems, for this is to be a peaceful demonstration led by an Orthodox priest, Father Gapon. 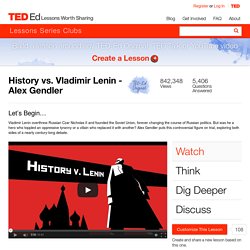 Petersburg, Russia, of peaceful demonstrators marking the beginning of the violent phase of the Russian Revolution of 1905. At the end of the 19th century, industrial workers in Russia had begun to organize; police agents, eager to prevent the Labour Movement from being dominated by revolutionary influences, formed legal labour unions and encouraged the workers to concentrate their energies on making economic gains and to disregard broader social and political problems.The 1905 Russian Revolution was sparked off by a peaceful protest held on January 22nd. GCSE Bitesize - Russia/USSR 1905 - 1941. The Bolshevik Seizure of Power. 12historyrelieflesson - henryjones. Introduction Dear Year 12 History students, Unfortunately I still haven't recovered from my cold and am not in today. 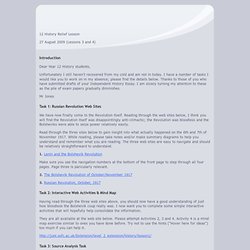 I have a number of tasks I would like you to work on in my absence; please find the details below. Thanks to those of you who have submitted drafts of your Independent History Essay. I am slowly turning my attention to these as the pile of exam papers gradually diminishes. Mr Jones Task 1: Russian Revolution Web Sites We have now finally come to the Revolution itself.

Read through the three sites below to gain insight into what actually happened on the 6th and 7th of November 1917. Russian Revolution: February 1917. In September 1915, Nicholas II assumed supreme command of the Russian Army fighting on the Eastern Front. 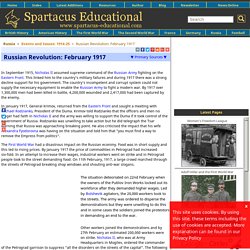 This linked him to the country's military failures and during 1917 there was a strong decline support for his government. The country's incompetent and corrupt system could not supply the necessary equipment to enable the Russian Army to fight a modern war. Karl Marx. Karl Marx: A Brief Introduction By Frank W. 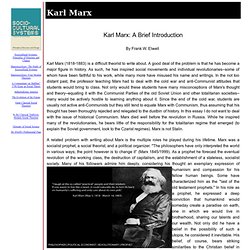 Elwell Karl Marx (1818-1883) is a difficult theorist to write about. A good deal of the problem is that he has become a major figure in history. As such, he has inspired social movements and individual revolutionaries--some of whom have been faithful to his work, while many more have misused his name and writings. A related problem with writing about Marx is the multiple roles he played during his lifetime. His fellow human beings. But here we will focus almost exclusively on Marx as a social theorist. Marxism. The simple explanation of Marxism: Marxism is a philosophy, a world-view, a system of social and economic analysis, and, it became political doctrine. 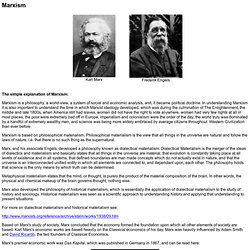 In understanding Marxism it is also important to understand the time in which Marxist ideology developed, which was during the culmination of The Enlightenment, the middle and late 1800s, when America still had slaves, women did not have the right to vote anywhere, women had very few rights at all in most places, the poor were extremely bad off in Europe, imperialism and colonialism were the order of the day, the world truly was dominated by a handful of extremely wealthy men, and science was being more widely embraced by average citizens throughout Western Civilization than ever before. 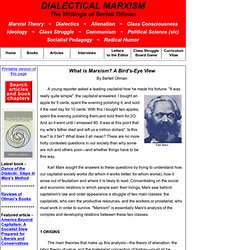 A Bird's-Eye View By Bertell Ollman A young reporter asked a leading capitalist how he made his fortune. "It was really quite simple", the capitalist answered. I bought an apple for 5 cents, spent the evening polishing it, and sold it the next day for 10 cents. Karl Marx sought the answers to these questions by trying to understand how our capitalist society works (for whom it works better, for whom worse), how it arose out of feudalism and where it is likely to lead. The main theories that make up this analysis—the theory of alienation, the labor theory of value, and the materialist conception of history—must all be understood with this focus in mind.

Some socialist ideas can be traced as far back as the Bible, but Marxism has its main intellectual origins in German philosophy, English political economy, and French utopian socialism. Marx's study of capitalism was grounded in a philosophy that is both dialectical and materialist. Marx, Karl, Wage Labor and Capital. The Bolsheviks Storm the Winter Palace, 1917. The Bolsheviks Storm the Winter Palace, 1917 On the evening of April 3, 1917 a train from Finland arrived in St. 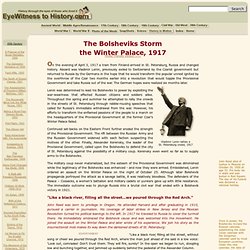