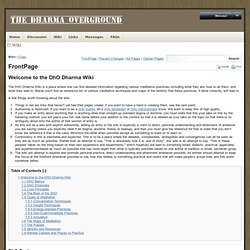 Below you'll find an extensive list of various meditative techniques and maps of the territory that these practices, if done correctly, will lead to. A few things worth knowing about the wiki: Things in red are links that haven't yet had their pages create: if you want to have a hand in creating them, see the next point: Authorship is restricted. If you want to be a Wiki Author, let a Wiki Moderator or DhO Administrator know. We want to keep this of high quality. DhO Basics DhO Dictionary Core Principles Here are some of the most core principles and teachings that are mentioned on this site.

The Best of the DhO Here you can find links to some of the Best of the DhO. Private Wiki - Dharma Overground. How to Practice Buddhist Meditation: Step-by-Step Instructions. Introducing Buddhism course. University of Hull Centre for Lifelong Learning Courses in Buddhism Introducing Buddhism About 2600 years ago the Buddha discovered the origin of unhappiness and a way to avoid it. 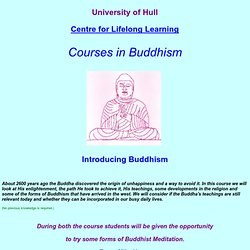 In this course we will look at His enlightenment, the path He took to achieve it, His teachings, some developments in the religion and some of the forms of Buddhism that have arrived in the west. (No previous knowledge is required.) During both the course students will be given the opportunity to try some forms of Buddhist Meditation. Tutor: Mike Horne Click here to continue -o0o- This class will not be run again as a night class unless enough people show an interest to make a viable group of over twelve students. For more information and a registration form please contact: Zen Buddhism WWW Virtual Library. Created: 5 Sep 1994. 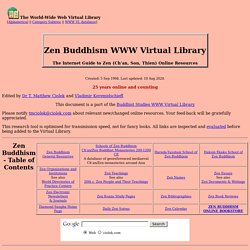 Last updated: 10 Aug 2020. 25 years online and counting Edited by Dr T. Matthew Ciolek and Vladimir Keremidschieff. This document is a part of the Buddhist Studies WWW Virtual Library Please notify tmciolek@ciolek.com about relevant new/changed online resources. This research tool is optimised for transmission speed, not for fancy looks. Zen/Ch'an FAQ. ZEN (Ch'an) FREQUENTLY ASKED QUESTIONS By Mark Vetanen and Ardent Hollingsworth Return to Zen Home Page (We suggest you save this FAQ to disk or print it out for future reference) What is Zen? 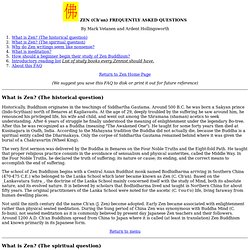 A great emphasis is placed on meditation to help a person awaken to a pure seeing of the true nature of everything. 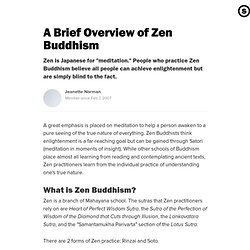 Zen Buddhists think enlightenment is a far-reaching goal but can be gained through Satori (meditation in moments of insight). While other schools of Buddhism place almost all learning from reading and contemplating ancient texts, Zen practitioners learn from the individual practice of understanding one's true nature. Zen Begin, Live your Life the Zen Way. Zen.

Zen is a school of Mahayana Buddhism[note 1] that developed in China during the Tang dynasty as Chán. 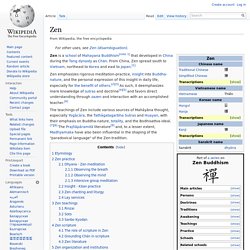 From China, Zen spread south to Vietnam, northeast to Korea and east to Japan. Zen emphasizes rigorous meditation-practice, insight into Buddha-nature, and the personal expression of this insight in daily life, especially for the benefit of others. As such, it deemphasizes mere knowledge of sutras and doctrine and favors direct understanding through zazen and interaction with an accomplished teacher. The teachings of Zen include various sources of Mahāyāna thought, especially Yogācāra, the Tathāgatagarbha Sutras and Huayan, with their emphasis on Buddha-nature, totality, and the Bodhisattva-ideal. The Prajñāpāramitā literature and, to a lesser extent, Madhyamaka have also been influential in the shaping of the "paradoxical language" of the Zen-tradition.

Etymology[edit] Where to begin study and practice? Where to Begin? 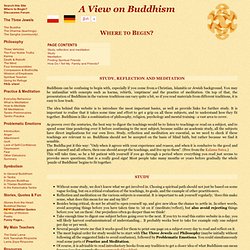 Buddhism can be confusing to begin with, especially if you come from a Christian, Islamitic or Jewish background. You may be unfamiliar with concepts such as karma, rebirth, 'emptiness' and the practice of meditation. On top of that, the presentation of Buddhism in the various traditions can vary quite a bit, so if you read materials from different traditions, it is easy to lose track. The idea behind this website is to introduce the most important basics, as well as provide links for further study. It is important to realise that it takes some time and effort to get a grip on all these subjects, and to understand how they fit together.

A Brief Introduction to Zen Buddhism. You've heard of Zen. 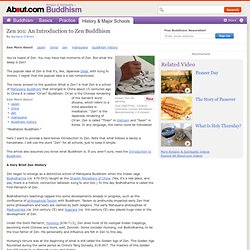 You may have had moments of Zen. But what the bleep is Zen? The popular idea of Zen is that it's, like, Japanese Dada, with kung fu monks. I regret that the popular idea is a tad romanticized. The nerdy answer to the question What is Zen? So you want to learn...Zen Buddhism. I'm looking for something. 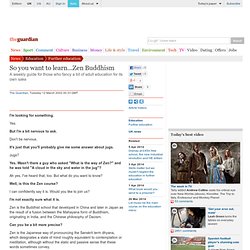 Yes. But I'm a bit nervous to ask. Don't be nervous. It's just that you'll probably give me some answer about jugs. Jugs? Yes. Buddhism and Buddhist schools.