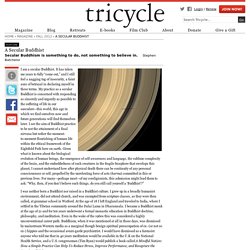 Living Buddhism. The R Word. In our current atmosphere of cultural polarization, the term religion has become highly contested. 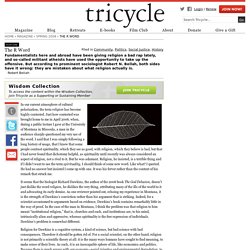 Just how contested was brought home to me in April 2006, when, during a public lecture I gave at the University of Montana in Missoula, a man in the audience sharply questioned my very use of the word. I said that I was simply following a long history of usage, that I knew that some people contrast spirituality, which they see as good, with religion, which they believe is bad, but that I had never found that dichotomy helpful, as spirituality until recently was always considered an aspect of religion, not a rival to it. Killing the Buddha. A Reply to B. Alan Wallace’s article “Distorted Visions of Buddhism: Agnostic and Atheist” The following is a reply to B. 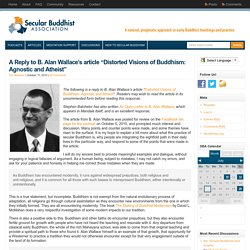 Alan Wallace’s article “Distorted Visions of Buddhism: Agnostic and Atheist“. Readers may wish to read the article in its uncommented form before reading this response. Stephen Batchelor has also written An Open Letter to B. Alan Wallace, which appears in Mandala itself, and is an excellent response. The article from B. I will do my sincere best to provide meaningful examples and dialogue, without engaging in logical fallacies of argument. Sam Harris Talks Spirituality. Sam Harris’s new book Waking Up has a lot to recommend it. 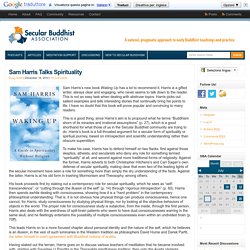 Harris is a gifted writer, always clear and engaging, who never seems to talk down to the reader. This is not an easy task when dealing with abstruse topics. Harris picks out salient examples and tells interesting stories that continually bring his points to life. I have no doubt that this book will prove popular and convincing to many readers. This is a good thing, since Harris’s aim is to propound what he terms “Buddhism shorn of its miracles and irrational assumptions” (p. 27), which is a good shorthand for what those of us in the Secular Buddhist community are trying to do. To make his case, Harris has to defend himself on two flanks: first against those skeptics, atheists, and secularists who deny any role for something termed “spirituality” at all, and second against more traditional forms of religiosity. In his last chapter, Harris deals with the pitfalls of guru worship. Gotama and Parfit on the Self. Image courtesy of Idea go / FreeDigitalPhotos.net The self is perhaps one of the most fraught and confusing elements of the dhamma. 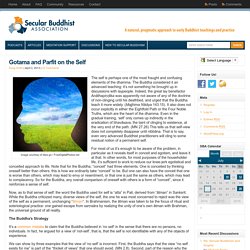 The Buddha considered it an advanced teaching: it’s not something he brought up in discussions with laypeople. Indeed, the great lay benefactor Anāthapiṇḍika was apparently not aware of any of the doctrine of non-clinging until his deathbed, and urged that the Buddha teach it more widely. (Majjhima Nikāya 143.15). It also does not occur explicitly in either the Eightfold Path or the Four Noble Truths, which are the heart of the dhamma. A Few Words on Bodhi and Batchelor. I would like to have more time to respond to Bhikkhu Bodhi’s recent piece on Secular Buddhism over at Secular Buddhism New Zealand, “Facing the Great Divide”, as well as to Stephen Batchelor’s lengthy response in the comments. 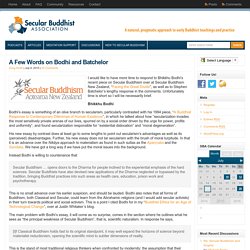 Unfortunately time is short so I will be necessarily brief. Bhikkhu Bodhi Bodhi’s essay is something of an olive branch to secularism, particularly contrasted with his 1994 piece, “A Buddhist Response to Contemporary Dilemmas of Human Existence”, in which he talked about how “secularization invades the most sensitively private arenas of our lives, spurred on by a social order driven by the urge for power, profits and uniformity”, and found secularization responsible for “existential dislocation” and “moral degeneration”.

His new essay by contrast does at least go to some lengths to point out secularism’s advantages as well as its (perceived) disadvantages. Secular Buddhism New Zealand. Facing the Great Divide by Ven. 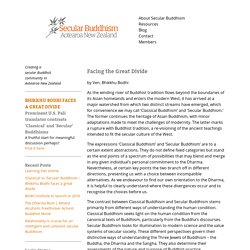 Bhikkhu Bodhi As the winding river of Buddhist tradition flows beyond the boundaries of its Asian homelands and enters the modern West, it has arrived at a major watershed from which two distinct streams have emerged, which for convenience we may call ‘Classical Buddhism’ and ‘Secular Buddhism.’ The former continues the heritage of Asian Buddhism, with minor adaptations made to meet the challenges of modernity. The latter marks a rupture with Buddhist tradition, a re-visioning of the ancient teachings intended to fit the secular culture of the West. The expressions ‘Classical Buddhism’ and ‘Secular Buddhism’ are to a certain extent abstractions. The contrast between Classical Buddhism and Secular Buddhism stems primarily from different ways of understanding the human condition. Religion Resurrected. My involvement with Buddhism began at the age of 13, when it just showed up at my door. 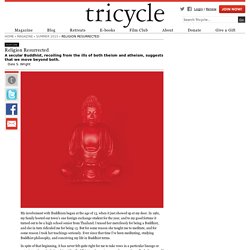 In 1961, my family hosted our town’s one foreign exchange student for the year, and to my good fortune it turned out to be a high school senior from Thailand. I teased her mercilessly for being a Buddhist, and she in turn ridiculed me for being 13. But for some reason she taught me to meditate, and for some reason I took her teachings seriously. Ever since that time I’ve been meditating, studying Buddhist philosophy, and conceiving my life in Buddhist terms.