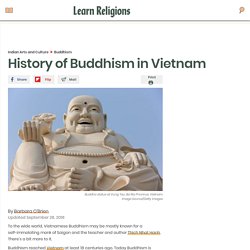 There's a bit more to it. Buddhism reached Vietnam at least 18 centuries ago. Today Buddhism is arguably the most visible religion in Vietnam, although it is estimated that fewer than 10 percent of the Vietnamese actively practice. Buddhism in Vietnam is primarily Mahayana, which makes Vietnam unique among the Theravada nations of southeast Asia. Most Vietnamese Mahayana Buddhism is a blend of Chan (Zen) and Pure Land, with some Tien-t'ai influence as well. For the past 50 years, Buddhism has been subject to a series of government oppressions. Arrival and Development of Buddhism in Vietnam Buddhism is thought to have arrived in Vietnam from both India and China by no later than the 2nd century CE. 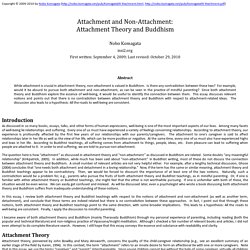 The Dhammacakkappavattana Sutta [Part Two] MADHYAMA PRATIPADA HRIDAYA : AN INTRODUCTION TO BUDDHISM - FreeSangha - Buddhist Forum. The Heart of the Middle Path : An Introduction to Buddhism Dr. 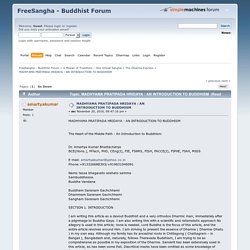 Amartya Kumar BhattacharyaBCE(Hons.), MTech, PhD, CEng(I), FIE, FIWRS, FISH, FACCE(I), FIPHE, FIAH, MIGS E-mail: amartyakumar@yahoo.co.inPhone:+913326688393/+919831046091 Namo tassa bhagavato arahato sammaSambuddhassa.Buddha Vandana Buddham Saranam GachchhamiDhammam Saranam GachchhamiSangham Saranam Gachchhami I am writing this article as a devout Buddhist and a very orthodox Dharmic man; immediately after a pilgrimage to Buddha Gaya. Buddhism, a major world faith, was founded by Lord Buddha in India over two thousand five hundred years ago. A major point is in order here. Too well known to be repeated here, the life of Lord Buddha ( 563-483 B.C.E. ) is a story of the life of one of the greatest human beings who ever lived. The Sanskrit word “Dharma” literally means “Property”. The Eight-Fold Path. The Eight-Fold Path is the fourth of the Four Noble Truths - the first of the Buddha's teachings. 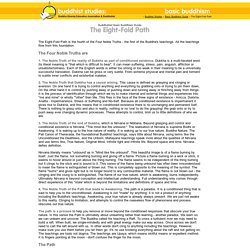 All the teachings flow from this foundation. The Four Noble Truths are 1. The Noble Truth of the reality of Dukkha as part of conditioned existence. Dukkha is a multi-faceted word. 2. 3. Nirvana literally means "unbound' as in "Mind like fire unbound". 4. The path is a process to help you remove or move beyond the conditioned responses that obscure your true nature.

Postures for Meditation: Insight Meditation Center. Written by Ines Freedman There are many positions we can meditate in: sitting, standing, walking and lying down. 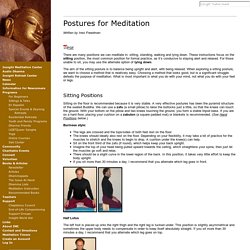 These instructions focus on the sitting position, the most common position for formal practice, as it’s conducive to staying alert and relaxed. For those unable to sit, you may use the alternate option of lying down. The aim of the sitting posture is to balance being upright and alert, with being relaxed. When exploring a sitting posture, we want to choose a method that is relatively easy. Sitting Positions Sitting on the floor is recommended because it is very stable. Burmese style: What is the Eightfold Path? Path in WA, taken by Dana Nourie The Eightfold Path is common to most Buddhist traditions, and secular Buddhists consider the Eightfold Path to be the heart of practice. 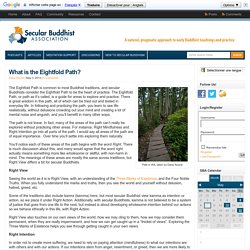 The Eightfold Path, or path as it’s called, is a guide for areas to explore and practice. There is great wisdom in this path, all of which can be tried out and tested in everyday life. In following and practicing the path, you learn to see life realistically, without delusions crowding out your mind and creating a lot of mental noise and anguish, and you’ll benefit in many other ways. Tibetan Buddhism. Buddhism - The Four Noble Truths, The Eightfold Path, Karma and Meditation Practice - Epic. Essentials of Buddhism - core concepts. Buddhist Sutras. Presents - Buddhist Digital Resources. A Complete Buddhist Sutra Collection. The Three Vehicles: Hinayana, Mahayana and Tantrayana. "The difference between the wise Buddhist and the sectarian Buddhist is like that between the vastness of space and the narrowness of a vase. 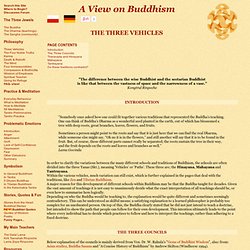 " Kongtrul Rinpoche In order to clarify the variations between the many different schools and traditions of Buddhism, the schools are often divided into the three Yanas (Skt.), meaning 'Vehicles' or 'Paths'. These three are; the Hinayana, Mahayana and Tantrayana. Within the various vehicles, much variation can still exist, which is further explained in the pages that deal with the traditions, like Zen and Tibetan Buddhism.

A major reason for this development of different schools within Buddhism may be that the Buddha taught for decades. Below explanation of the councils is mainly derived from Ven. The First Council Three months after the Buddha's Mahaparinirvana (passing away), his immediate disciples convened a council at Sattapanni Cave Pavilion at Mount Vebhara near the city of Rajagaha (Rajgir). Buddhism Archive. SHIN BUDDHISM IN A NUTSHELL. A Brief History. 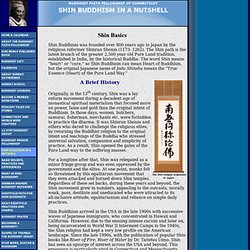 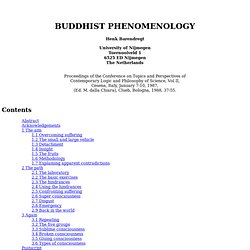 M. dalla Chiara), Clueb, Bologna, 1988, 37-55. Contents Abstract. Basic ideas of Yogacara Buddhism. By Roger Zim A Paper Prepared for Philosophy 772 "Yogacara Buddhism"San Francisco State UniversityFall, 1995 If we do not have in ourselves the Buddha mind, then where are we to seek Buddha? 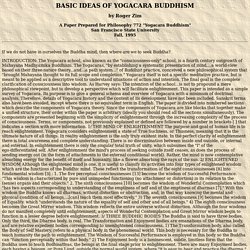 INTRODUCTION: The Yogacara school, also known as the "consciousness-only" school, is a fourth century outgrowth of Mahayana Madhyamika Buddhism. The Yogacaras, "by establishing a systematic presentation of mind,...a world-view based on their three-nature theory...and...a path system... " of Buddhist practice, conceived a new philosophical system that "brought Mahayana thought to its full scope and completion. " Yogacara itself is not a specific meditative practice, but is meant to be applied as a descriptive tool to understand situations of action and intention. 3) Subsequently-attained wisdom is a pure form of knowledge that flows out of non-distinction making, so it is "purified mundane knowledge. " Consciousness is awareness of a "self". There is nothing separate or independent from consciousness.

Yogacara — Buddha World. From Buddha World Yogācāra (Sanskrit: "yoga practice"; "one whose practice is yoga" is an influential school of Buddhist philosophy and psychology emphasizing phenomenology and (some argue) ontology through the interior lens of meditative and yogic practices. It developed within Indian Mahāyāna Buddhism circa the fourth century C.E.