Charles Darwin the Buddhist? Ewen Callaway, online reporter In the Expression of the Emotions in Man and Animals -- the neglected step-child of Charles Darwin's trifecta of treatises -- the father of evolution theorised that emotion and compassion were universal and naturally selected features of humans. 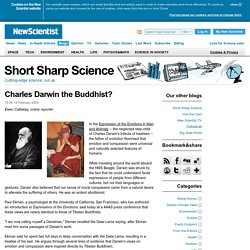 While traveling around the world aboard the HMS Beagle, Darwin was struck by the fact that he could understand facial expressions of people from different cultures, but not their languages or gestures. Darwin also believed that our sense of moral compassion came from a natural desire to alleviate the suffering of others. He was an ardent abolitionist. Paul Ekman, a psychologist at the University of California, San Francisco, who has authored an introduction to Expressions of the Emotions, said today at a AAAS press conference that these views are nearly identical to those of Tibetan Buddhists.

Ekman said he spent two full days in deep conversation with the Dalai Lama, resulting in a treatise of his own. Darwin and Buddhism. Today is Charles Darwin's 200th birthday. 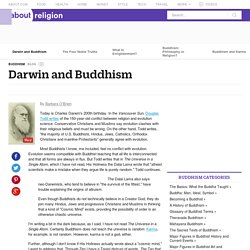 In the Vancouver Sun, Douglas Todd writes of the 150-year-old conflict between religion and evolution science. Conservative Christians and Muslims say evolution clashes with their religious beliefs and must be wrong. On the other hand, Todd writes, "the majority of U.S. Buddhists, Hindus, Jews, Catholics, Orthodox Christians and mainline Protestants" generally agree with evolution. Most Buddhists I know, me included, feel no conflict with evolution. The Dalai Lama also says neo-Darwinists, who tend to believe in "the survival of the fittest," have trouble explaining the origins of altruism.

I'm writing a bit in the dark because, as I said, I have not read The Universe in a Single Atom. Further, although I don't know if His Holiness actually wrote about a "cosmic mind," I want to address that. His Holiness's teachings on Dependent Origination make this clear. Science studies what can be observed, measured and quantified. Buddhivihara - Articles. Buddhism and Darwin’s Theory of Evolution By D. 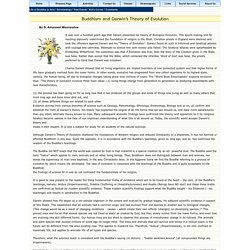 Amarasiri Weeraratne It was over a hundred years ago that Darwin presented his theory of Biological Evolution. Darwin and the Buddha. A recipient of the National Magazine Award for Essay and Criticism, Robert Wright is the author of The Moral Animal and Nonzero: The Logic of Human Destiny. 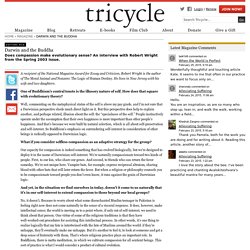 He lives in New Jersey with his wife and two daughters. One of Buddhism’s central tenets is the illusory nature of self. How does that square with evolutionary theory? Well, commenting on the metaphysical status of the self is above my pay grade, and I’m not sure that a Darwinian perspective sheds much direct light on it. But this perspective does help to explain another, and perhaps related, illusion about the self: the “specialness of the self.” What if you consider selfless compassion as an adaptive strategy for the group?

Our capacity for compassion is indeed something that has evolved biologically, but we’re designed to deploy it in the name of Darwinian self-interest. No, it doesn’t. What do you mean by “cultural evolution”? In your work, you refer to that tendency as “directionality.” What do you mean by “non-zero-sum”? Sure. Four reasons Buddhists can love evolution. Evolution — at least in the United States — has a deeply troubled relationship with religion. 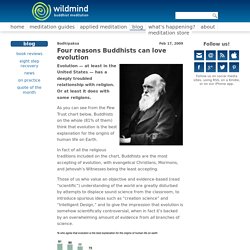 Or at least it does with some religions. As you can see from the Pew Trust chart below, Buddhists on the whole (81% of them) think that evolution is the best explanation for the origins of human life on Earth. In fact of all the religious traditions included on the chart, Buddhists are the most accepting of evolution, with evangelical Christians, Mormons, and Jehovah’s Witnesses being the least accepting. Those of us who value an objective and evidence-based (read “scientific”) understanding of the world are greatly disturbed by attempts to displace sound science from the classroom, to introduce spurious ideas such as “creation science” and “Intelligent Design,” and to give the impression that evolution is somehow scientifically controversial, when in fact it’s backed by an overwhelming amount of evidence from all branches of science.

First up is that Buddhism has no creation myth to defend. Buddhism and evolution. As no major principles of Buddhism contradict it, many Buddhists tacitly accept the theory of evolution.[1][2] Questions about the eternity or infinity of the universe at large are counted among the 14 unanswerable questions which the Buddha maintained were counterproductive areas of speculation.[3] As such, many Buddhists do not think about these kinds of questions as meaningful for the Buddhist goal of relieving oneself and others from suffering.[4] One does not need to know the origin of life, nor agree with the Buddha's position on scientific topics, in order to achieve enlightenment. 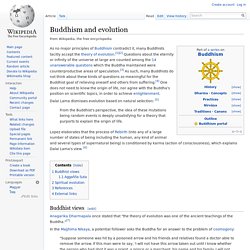 Dalai Lama dismisses evolution based on natural selection: [5] From the Buddhist's perspective, the idea of these mutations being random events is deeply unsatisfying for a theory that purports to explain the origin of life. Buddhist views[edit] Anagarika Dharmapala once stated that "the theory of evolution was one of the ancient teachings of the Buddha. Stephen T. Aggañña Suta[edit] References[edit]