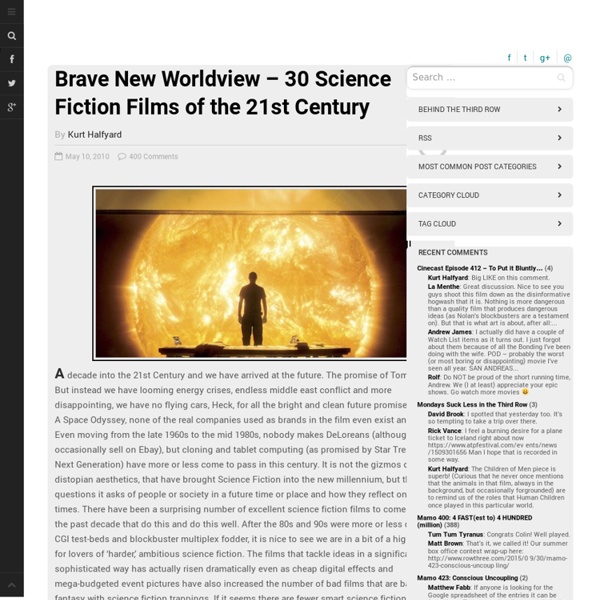 A decade into the 21st Century and we have arrived at the future. The promise of Tomorrow. But instead we have looming energy crises, endless middle east conflict and more disappointing, we have no flying cars, Heck, for all the bright and clean future promised in 2001: A Space Odyssey, none of the real companies used as brands in the film even exist anymore. Even moving from the late 1960s to the mid 1980s, nobody makes DeLoreans (although they occasionally sell on Ebay), but cloning and tablet computing (as promised by Star Trek: The Next Generation) have more or less come to pass in this century. It is not the gizmos or the distopian aesthetics, that have brought Science Fiction into the new millennium, but the questions it asks of people or society in a future time or place and how they reflect on our own times. There have been a surprising number of excellent science fiction films to come about in the past decade that do this and do this well. The Fountain 28 Weeks Later The Host

Science Fiction Timeline Site . . . Marc Carlson's KNOWN SPACE Chronology . . . Science Fiction Timeline Site • Larry Niven's Known SpaceFramed Site Timeline • Links TIME LINE of Larry Niven's Known Space Universe Revision 111407 Compiled by I. Marc Carlson ( marc-carlson@utulsa.edu ) The 100 Greatest Movie Insults of All Time: The Video By Harry Hanrahan | Guides | April 22, 2011 | Comments (0 View hh -- the man who brought us The 100 Cheesiest Movie Lines of All Time and Get Out of There! The Video -- is back with another fantastic video today. He's even pulled himself out of anonymity. His name is Harry Hanrahan, and he's British.

Top 100 Tuesday: 100 Best Movies of the Decade EmailEmail Since we first published our 100 Best Movies of the Decade in 2009, films have continued to get bigger and better. Here’s an update to the original list. The Battle for Your Mind: Brainwashing Techniques Being Used On The Public By Dick Sutphen Authoritarian followers Mind Control Subliminals By Dick Sutphen Summary of Contents The Birth of Conversion The Three Brain Phases How Revivalist Preachers Work Voice Roll Technique Six Conversion Techniques 1. keeping agreements 2.physical and mental fatigue 3. increase the tension 4. Uncertainty. 5. Jargon 6.

What's the Saddest Movie of All Time? What's the saddest movie of all time? Although this may seem like a question that's open for debate, there is actually a scientific answer. According to Smithsonian.com, a scientific study from the University of California at Berkeley has determined that the saddest movie of all time is "The Champ." The 1979 film tells the story of a washed-up boxer who returns to the ring to try and make enough money to retain custody of his son. The study found that the scene in the movie that consistently caused the most people to cry was when "The Champ" dies as his son pleads for him to wake up.

The 10 Most Puzzling Ancient Artifacts The Bible tells us that God created Adam and Eve just a few thousand years ago, by some fundamentalist interpretations. Science informs us that this is mere fiction and that man is a few million years old, and that civilization just tens of thousands of years old. Could it be, however, that conventional science is just as mistaken as the Bible stories?

The Best Science Fiction Books (According to Reddit) Recently, someone asked Reddit for a list of the best science fiction books of all time. Being a fan of sci-fi, and wanting to expand my own reading list, I thought it would be helpful to tally the results and preserve them here for future reference. I've also included selected quotes from the comments, as well as my own notes on the books I've already read. PS: All book images in this post are copyright Amazon, and were retrieved using my Big Book Search Engine. So, without further ado, here are the Greatest Sci-Fi Books of All Time, ordered by upvote count: