8 Books For a Higher Existence 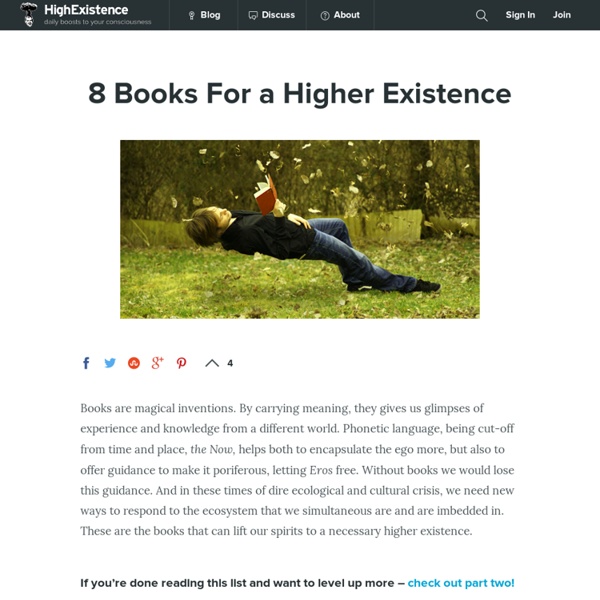 Books are magical inventions. By carrying meaning, they gives us glimpses of experience and knowledge from a different world. Phonetic language, being cut-off from time and place, the Now, helps both to encapsulate the ego more, but also to offer guidance to make it poriferous, letting Eros free. Without books we would lose this guidance. And in these times of dire ecological and cultural crisis, we need new ways to respond to the ecosystem that we simultaneous are and are imbedded in. These are the books that can lift our spirits to a necessary higher existence. If you’re done reading this list and want to level up more – check out part two! Thus Spoke Zarathustra – Friedrich Nietzsche Becoming Animal – David Abram Abram’s first book The Spell of the Sensuous convincingly argued that being human is inseparably interconnected with everything that is not human. Cloud-Hidden, Whereabouts Unknown: A Mountain Journal – Alan Watts The Story of B – Daniel Quinn Original photo by June

A Year in Reading 2012 By C. Max Magee posted at 6:00 am on December 3, 2012 20 The end of another year is here (so soon? 20 Ways to Feel ALIVE!!!!!! Unless you are the second coming of Jesus Christ (if you are, please comment!) it’s impossible not to feel a bit down sometimes. Here are 20 quick ways to revive yourself and get back that “on top of the world” feeling. Stick your body out of a sunroof while the car is driving I can tell you first-hand this one is a lot of fun. If you don’t have a sunroof, a window works just as well. Speeds of 40 mph+ make the experience much more invigorating.

Studying for better retention and better grades Main page Studying for better retention and better grades There are 3 memory processes that affect our ability to understand, store and retrieve information. Each can improve with practice. The 3 are: The Eternal Idea of Revolutionary Justice Resurgence is in the wind. The cynicism that has dogged every gesture of our resistance is giving way as the disappointment of 20th century communism is eclipsed by the rebellious will to try again. Guiding this radical revival are two philosophers whose political theories breathe new life into the revolutionary project. We speak of Alain Badiou and Slavoj Žižek, a neo-Platonist-Maoist and a post-Lacanian-Leninist, whose carefully considered political philosophy revives the ideals of egalitarian-communism and heralds revolution in our lifetime. Their project is philosophically grounded in Badiou’s two-part magnum opus Being and Event and Logics of Worlds.

100 Websites To See Before You Die (Part 1) - Page 1 Here at Maximum PC, we've always done our fair share of website recommendation articles--including a couple of doozies from the past few years. And of course we're not the only ones who do this sort of article either; it's a proven popular format. But this year, we thought we'd mix things up a little bit. Rather than just focusing on what's services are popular, or which web apps will make you the most productive, we wanted to take a look at what's fun on the Internet.

What Americans Keep Ignoring About Finland's School Success - Anu Partanen The Scandinavian country is an education superpower because it values equality more than excellence. Sergey Ivanov/Flickr Everyone agrees the United States needs to improve its education system dramatically, but how? One of the hottest trends in education reform lately is looking at the stunning success of the West's reigning education superpower, Finland. Think you’ve got a terrible memory? You don’t know the half of it In this far-ranging chat, psychologist Elizabeth Loftus spoke with MIT neuroscientists Steve Ramirez and Xu Liu about the future of memory manipulation. Last year, MIT neuroscientists Xu Liu and Steve Ramirez manipulated the memory of a mouse. In a fascinating and mildly troubling breakthrough caused by a laser and the protein channelrhodopsin, they “activated” fear memories in a mouse. The impetus, says Ramirez, was the awful feeling of a break-up, the desire, Eternal Sunshine-style, to erase the bad associations with his ex. Says Ramirez, “I realized, maybe that’s a little bit lofty for now.

My Advice for Starting a Business By Leo Babauta Recently I encouraged my 13-year-old daughter Maia to start a vegan cupcake business, and it’s so exciting to watch her get started. As I talked to her about starting, she had some worries: How to Commit Internet Suicide and Disappear from the Web Forever Looks at picture. The lone man stands on the edge of the cliff. Remembering how he had slayed the mighty browser, Internet Explorer.