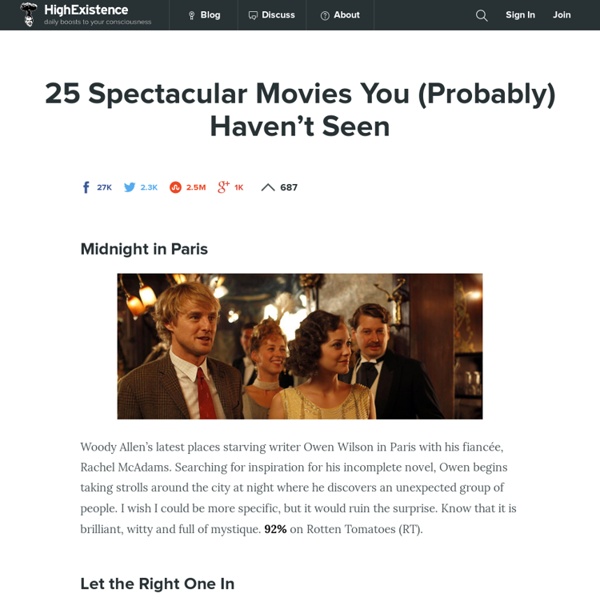 Midnight in Paris Woody Allen’s latest places starving writer Owen Wilson in Paris with his fiancée, Rachel McAdams. Searching for inspiration for his incomplete novel, Owen begins taking strolls around the city at night where he discovers an unexpected group of people. I wish I could be more specific, but it would ruin the surprise. Know that it is brilliant, witty and full of mystique. 92% on Rotten Tomatoes (RT). Let the Right One In The best vampire movie ever made in my opinion. Watch Let the Right One In for FREE on Amazon Instant Video The Man From Earth Holy &#%@ this film’s plot is fascinating! Garden State This is my absolute favorite film. Waking Life It’s impossible for you to grasp Waking Life without actually watching it, but I’ll do my best to explain it. Watch Waking Life for FREE on Amazon Instant Video Closer This film is a rather dark, yet comedic story about the twisted relationships between Natalie Portman, Jude Law, Clive Owen and Julia Roberts. Sin Nombre Snatch The Descent

Top 10 Shocking Documentaries Movies and TV As a visual medium, documentaries frequently succeed in portraying the unimaginable far better then any book alone could do. Beaming everything from the consequences of child abuse to the horrors of nuclear warfare into the homes of millions, the following infamous documentaries shock the viewer and challenge perceptions. Top 10 Colorado Films 1. The Shining (directed by Stanley Kubrick) Our #1 Colorado movie pick is The Shining. Jack Nicholson and the Torrance soon find themselves in a psychological nightmare at the Overlook Hotel—a hotel modeled after Stephen King’s experiences at the Stanley Hotel in Estes Park, Colorado. The 34 Simple Two-Ingredient Recipes Posted by admin on May 22, 2013 in Recipes | 0 comments Cooking doesn’t get much easier than this. BTW, these are mostly desserts. I hope you’re OK with that.

The 15 Best Miramax Films Today, the indie world and the film world at large lost a giant in the field, watching Disney close the doors and turn the lights off on Miramax. As sad a day like today is, and as uncertain as the future is, we can still hold on to the memories. Most of them are now on Blu-ray. Or at least Laser Disc (because we all own one). Ageing: The girls who never grow older Our top 12 stories of 2014 - #4: A handful of girls seem to defy one of the biggest certainties in life: ageing. Virginia Hughes reports on the families wrestling with a condition they can’t explain, and the scientist who believes that these children could hold the key to immortality. Richard Walker has been trying to conquer ageing since he was a 26-year-old free-loving hippie. It was the 1960s, an era marked by youth: Vietnam War protests, psychedelic drugs, sexual revolutions. The young Walker relished the culture of exultation, of joie de vivre, and yet was also acutely aware of its passing.

The 30 Best Films of the Decade We’re all in that humanistic mode of evaluating our lives – coming up on the end of the year and the last time a zero will be the third digit on our calendars. We’re all (from Variety to Cat Fancy) also waxing expert on what films were the best of the best of the best of the past ten years. Which is why there is an unnavigable sea of opinion polluting the internet right now. GritFX T-Shirts Magazine Personally, I thought the first year of the new decade to be rather lacklustre as far as cinema goes. The sheer volume of reckless, morally inept comedies and action films was overwhelming. Fellow author Adam Fay said it best last year when, in his piece on Christopher Nolan’s Inception stated, “While there is no doubt that this is a standout film, the over-the-top gushing of praise strikes me to be less about the strength of the actual film and more about the pitiful films it shares multiplex space with.” Such a statement could be applied to many preceding years, but never more pertinent in the light of 2010’s bucket of trash. The Best It’s a short list, this one.

DIY Chan Luu Bracelet My goal this holiday season was to really try my best to make some homemade gifts. So far I’m doing pretty well with my wreath, some burlap covered candles, some personalized coasters and this past weekend I gave a try at some jewelry. You may have noticed how wrap bracelets are everywhere lately. The Fifty Greatest Cult Movies of All Time - Page 5 41. Stop Making Sense (1984) People had been filming rock concerts and calling the resulting footage "movies" for decades before Jonathan Demme took command of the director's chair. But working with his stars, Talking Heads, Demme made a concert movie with no out-of-focus shots, catch-as-catch-can camerawork, or even the intruding interviews that characterized even Martin Scorsese's The Last Waltz.