The Weekly Ansible, 50 Sci-Fi & Fantasy Works Every Socialist Should Read (by China Mieville) 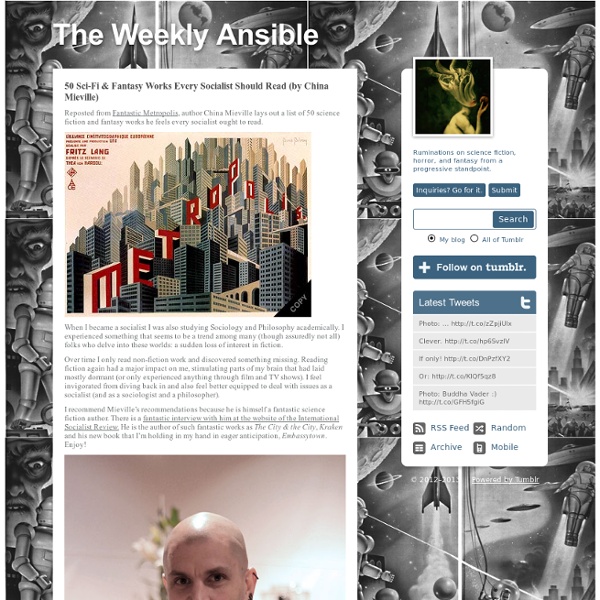 OMNI Magazine Collection : Free Texts From Wikipedia: OMNI was a science and science fiction magazine published in the US and the UK. It contained articles on science fact and short works of science fiction. OMNI was launched by Kathy Keeton, long-time companion and later wife of Penthouse magazine publisher Bob Guccione, who described the magazine in its first issue as "an original if not controversial mixture of science fact, fiction, fantasy and the paranormal". The magazine was initially edited by Frank Kendig, who left several months after the magazine's launch. In its early run, OMNI published a number of stories that have become genre classics, such as Orson Scott Card's "Unaccompanied Sonata", William Gibson's "Burning Chrome" and "Johnny Mnemonic", Harlan Ellison's novella "Mefisto in Onyx", and George R. OMNI entered the market at the start of a wave of new science magazines aimed at educated but otherwise "non-professional" readers. International editions of OMNI magazine were published in at least five markets.

Behold the incredible places where we'll build cities in space Another thought provoking article at io9. Europa is a must-go-now destination. Forget about the very entertaining film of the same name, I want to see a global effort to send a submersible probe, outfitted with a drill to find passage beneath it's icy surface, and I don't want to wait twenty years for this to happen. The exploration, militarization and colonization of our solar systems jurisdiction is "crucial" to the survival of our species. I like the idea of planetary bases, but if radiation is one of our largest enemies, maybe a synthetic atmosphere is a nice goal. If we create an artificial atmosphere, wouldn't that be the best shield to deflect radiation and even meteors? And yes, I know this is fanciful thinking, but so was the Star Trek communicator 40 years ago. Hmmm...

Science Fiction Does Something Way Better Than Predict The Future Isn't it plausible to say it has created the future as well. SciFi has influenced so many people, maybe influenced some to the point where they wanted to create what they have loved for so long. Examples are everywhere, especially with our latest technology. Ofcourse it does that. Influence and inspiration is such a prime mover that it is bound to have consequences, both in the negative and the positive. Pick up a book like Stand on Zanzibar, and do a little research, and it is easy to find examples of people who took inspiration from there to ideas, and ultimately to processes of creation. But even on a more general / collective level, perspectives that become internalised by social dynamics, the group level of human perception, pave the road for those groups to create conditions and circumstances that follow (and fill) anticipations and expectations created by what and how groups internalise concepts.

The Matrix Virtual Theatre Matrix Virtual Theatre Wachowski Brothers Transcript Nov. 6, 1999 Welcome to the first live Virtual Theatre presentation in the world! Tonight you'll be able to watch The Matrix with special guests Andy and Larry Wachowski, the creators of the film. WachowskiBros: Hi! ILoveNatPortman says: Can you give any information on the sequels, or even confirm their existence? blindrocket says: Do you practice Martial Arts? AgentMartin says: Why didn't you both do the commentary on the DVD, time restraints? Hiryu says: Which Anime inspired you the most and why? AgentMartin says: Is there anything in The Matrix which you weren't too happy with; wished you could have done differently? blindrocket says: Would you consider yourselves computer nerds? AgentMartin says: Were you excited about DVD as a medium for your movies to go to the homes of the masses? Enigma says: What is the role or faith in the movie? Peter says: Will there be a directors' cut of The Matrix with any deleted scenes or out-takes?

5 Essential Frank Herbert Novels That Aren't About Dune There are probably several schools on this. One school (of which I'm a member) would be that God Emperor (the fourth book) basically jumped the shark (or maybe the shark was jumped somewhere in Children Of Dune, even) and that while Herbert may have been getting back into the driver's seat right before he died, Chapterhouse: Dune isn't really good enough to justify slogging through its two predecessors. So you can safely just read the first three books (Dune, Dune Messiah, Children Of Dune) and pretend the rest never happened. The second school, I believe, would be that God Emperor Of Dune is Frank Herbert's masterpiece (or something close to it) and you really need to read it (and Dune, of course), and then the remaining books in the original sextet become essential filler. As for the sequels and prequels co-authored by Frank Herbert's son, Brian, allegedly from Frank Herbert's notes: there's an even wider divide between people who think the Brian Herbert/Kevin J. Dune Heretics of Dune

A Mosque Among The Stars available for free! | Islam and Science Fiction A Mosque Among The Stars was the first anthology that dealt with the subject of Muslim characters and/or Islamic themes and Science Fiction. It was edited by me (Muhammad Aurangzeb Ahmad) and the Canadian Muslim author Ahmad Khan. It came out in 2007. Now that it has been years since it was released in printed form, we have decided to release A Mosque Among The Stars to the public as a Creative Commons Licensed (Attribution-NonCommercial-NoDerivs) book. Download the Book For the readers who are coming to this website for the first time be sure to check out my other sci-fi related Art-Project – Silicon Arabic.

Was poet John Milton the father of science fiction? Image from Wikimedia Commons Before an ominous two-handed engine called “budget constraints” smote it into oblivion, a movie adaption of Milton’s Paradise Lost was slated to arrive in 2013. Directed by Alex Proyas and starring Bradley Cooper as Satan, the film was billed as a science fiction actioner featuring 3-D “aerial warfare” between heavenly hosts and (probably) a lot of dark muttering about forbidden knowledge. Katy Waldman is a Slate assistant editor. Follow But that doesn’t mean we should forget Paradise Lost as the holidays roll in. Not to mention that the text of Paradise Lost is saturated in science. Also, Milton kinda sorta thought that extraterrestrial life might be possible. Then there’s Milton’s obsession with secret, all-powerful technologies. Yikes. And if you need more proof that John Milton inspired generations of sci-fi progeny, note that the creature in Mary Shelley’s Frankenstein liked to read books.

Science Fiction Under Totalitarian Regimes, Part 2: Tsarist and Soviet Russia “Aelita is a planetary romance in which Los, a Soviet scientist and inventor, travels to Mars and, with the help of a Red Army officer, overthrows the fascist civilization there and institutes a Communist paradise.” - Well, this summary of the plot is, of course, wonderfully snappy with that added ironic underside of dismissive hindsight, but is utterly incorrect. As anyone who has actually read the soviet ‘Princess of Mars’ knows, the two protagonists - ‘Los the engineer’ and ‘Gusev the red soldier of fortune’ – are at odds from the start. Los is a moody dreamer, content to remain on decadent Mars and maybe make love to Aelita, while Gusev can’t wait to stir up trouble. The Martian society (based on a conquest of locals by migrating Earth Atlanteans thousands of years ago) is dying, yet Gusev manages to infect the fatalist working underclass with the energy for an uprising, which quickly degenerates into chaos and is crushed.

Pulp Science Fiction Under German Totalitarianism Strange, yesterday came across old German pulp magazines as I was researching the whole Eurospy genre. Rolf Torring, Kommissar X, Henry Cotton (of which they created a terrible, terrible reboot film) but most of all Perry Rhodan. I think PR is among the most popular ongoing SF pulp fiction in the world, there are still many, many readers. Flagged

211, William Gibson Get more interviews like this—plus fiction, poetry, art, and more—and subscribe to The Paris Review today! Vancouver, British Columbia, sits just on the far side of the American border, a green-glass model city set in the dish of the North Shore Mountains, which enclose the city and support, most days, a thick canopy of fog. There are periods in the year when it’ll rain for forty days, William Gibson tells me one mucky day there this winter, and when visibility drops so low you can’t see what’s coming at you from the nearest street corner. But large parts of Vancouver are traversed by trolley cars, and on clear nights you can gaze up at the wide expanse of Pacific sky through the haphazard grid of their electric wires. Gibson came to Vancouver in 1972, a twenty-four-year-old orphan who’d spent the past half-­decade trawling the counterculture in Toronto on his wandering way from small-town southern Virginia. Pattern Recognition was the first of that series. —David Wallace-Wells No. E.

Metropolis: A Rare Film Programme for Fraitz Lang's 1927 Masterpiece Original programme for the British premiere of Fritz Lang’s Metropolis in 1927. The world’s most valuable movie poster, for Fritz Lang’s 1927 masterpiece Metropolis, is to be auctioned again after making a record $690,000 in 2005. Ephemera related to the film is notoriously scarce, with only four copies of the poster known to survive. Below the fold you’ll find the complete booklet – just click any image for the high-res version: Here Are the 1960s Science Fiction Novels Everyone Should Read Personally, I think it's an age thing, and society's evolving view of Nazis. The novel was published less than 20 years after WWII, and post-war nostalgia and pop culture was all about the US kicking some Nazi butt. Dick's alternate world where the Axis won was an interesting but unimaginable thought experiment for adults of the 60s. Then Vietnam happened, and war wasn't cool any more, and WWII was our parents war. So the media turned the Nazis into clowns and buffoons with Hogan's Heroes and Raiders of the Lost Ark. Then in the 90s we remembered the Holocaust, and Nazis weren't funny any more. Philip K.

The Victorian Hugos: 1891 SExpand For anybody curious, the title image may be from somebody's flickr... but it's a picture (or copy) of "The Picture of Dorian Grey" by Ivan Albright. I remember stumbling upon that painting at the Art Institute in Chicago. Quite jarring comparred to the other works that are hanging in the gallery.