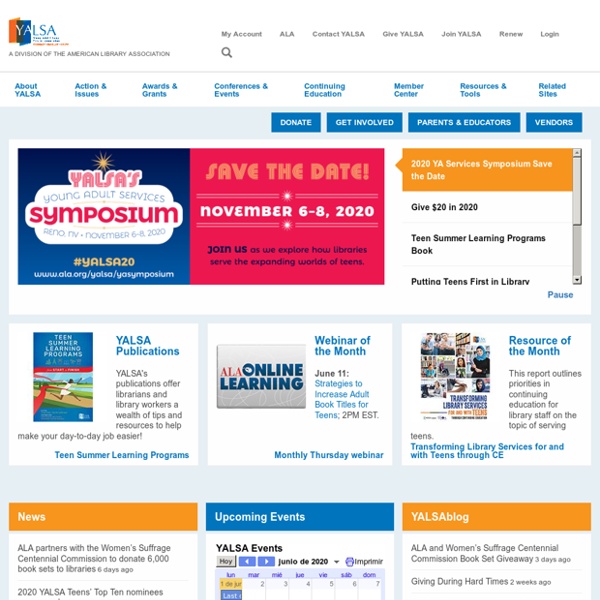 Teaching with the Library of Congress Stop-action photography has become an integral part of our lives. It allows us to watch the beauty of a dancer, the grace of an athlete or the motion of an animal one frame at a time. It is hard to believe that until Edweard Muybridge began his study of animal locomotion with photography in the late 19th century, we were limited to only what the eye could see or what was in a single photograph. In celebration of Muybridge’s birthday, the Library of Congress has uploaded a number of Muybridge’s Animal Locomotion images from its collections into Flickr. The horse in motion, illus. by Muybridge.

IL State Library E-News is the best way to find out what’s happening at the Illinois State Library (ISL), and the first place you will learn about grant offerings, continuing education opportunities and other news you need to know. In case you've missed one of the E-News, issues from the past two years are archived below. Spring 2014 Winter 2014 Fall/Winter 2013 Summer 2013

BFYA Each year, YALSA presents the Best Fiction for Young Adults list after ALA's Midwinter Meeting. This year’s list of 102 books was drawn from 200 official nominations. The books, recommended for ages 12-18, meet the criteria of both good quality literature and appealing reading for teens. The list comprises a wide range of genres and styles, including contemporary realistic fiction, fantasy, horror, science fiction and novels in verse. In addition to the full list, the Best Fiction for Young Adults committee also created a Top Ten list of titles from the final list, denoted here by an asterisk. “I am very proud of the hard work, patience and dedication each committee member took this year in selecting the 2013 BFYA list,” said Chair Ted Schelvan.

Caldecott Medal Home Page Leave Me Alone! illustrated and written by Vera Brosgol, and published by Roaring Brook Press, a division of Holtzbrinck Publishing Holdings Limited Partnership. At the end of her rope, Granny is desperate for time alone to finish knitting sweaters for a house filled with dozens of rambunctious children. Brosgol’s expressive watercolor and cartoon art presents a genre-breaking journey taking Granny from the traditional forest setting to the mountains to the moon and beyond. Freedom in Congo Square, illustrated by R. Gregory Christie, written by Carole Boston Weatherford and published by Little Bee Books, an imprint of Bonnier Publishing Group.

YALSA Book Awards *YALSA has launched the new Teen Book Finder Database, which is a one-stop shop for finding selected lists and award winners. Users can search this free resource by award, list name, year, author, genre and more, as well as print customizable lists. This new resource will replace the individual award and list web pages currently on YALSA’s site that are not searchable and that are organized only by year. YA Programming Specialist - NYPL What is a daily schedule like for you? For me, every day is slightly different, but it involves a lot of e-mail and phone calls. I usually meet with one new programmer or organization a week to build new partnerships and bring in awesome new programs. I try to get out to other libraries to see the teen programs that are going on and to talk with teens and staff members to see what sort of new programs they want to see happen at their library.

The Metropolitan Museum of Art Puts 400,000 High-Res Images Online & Makes Them Free to Use On Friday, The Metropolitan Museum of Art announced that “more than 400,000 high-resolution digital images of public domain works in the Museum’s world-renowned collection may be downloaded directly from the Museum’s website for non-commercial use.” Even better, the images can be used at no charge (and without getting permission from the museum). In making this announcement, the Met joined other world-class museums in putting put large troves of digital art online. The Batchelder Award is given to the most outstanding children’s book originally published in a language other than English in a country other than the United States, and subsequently translated into English for publication in the United States. Mikis and the Donkey is the 2015 Batchelder Award winner. The book was written by Bibi Dumon Tak, illustrated by Philip Hopman, translated by Laura Watkinson and published Eerdmans Books for Young Readers, an imprint of Wm. B. Eerdmans Publishing Co. Mikis’ simple, quiet life on the Greek island of Corfu is upended when his grandfather surprises him by buying a donkey.

NCTE Orbis Pictus Award for Outstanding Nonfiction for Children Congratulations to the 2017 award winners! 2017 Winner Some Writer! SLJ Best Books '12 By SLJ Book Review Editors: Trevelyn Jones, Luann Toth, Marlene Charnizon, Daryl Grabarek, Chelsey Philpot, Shelley Diaz, Mahnaz Dar, and Joy Fleishhacker. on November 29, 2012 The breakdown of this year’s list reflects the realities of the publishing world—YA continues to dominate in terms of output and sheer heft, but there was a noticeable uptick in the numbers of fine middle grade novels. There were several terrific picture books with engaging characters and dynamic art. Several novels were set in well-delineated fantastical worlds, yet quite a few focused on young people grappling with war and political upheaval in the real world, in real time. Humorous titles flourished, such as Polly Horvath’s One Year in Coal Harbor, Adam Gidwitz’s In a Glass Grimmly, and Lemony Snicket’s Who Could That Be at This Hour?

The Young Adult Library Services Association allows me to keep up with books that have recieved awards that I may want to include in my library, and ideas for serving my young adult patrons. by milburnb Mar 15