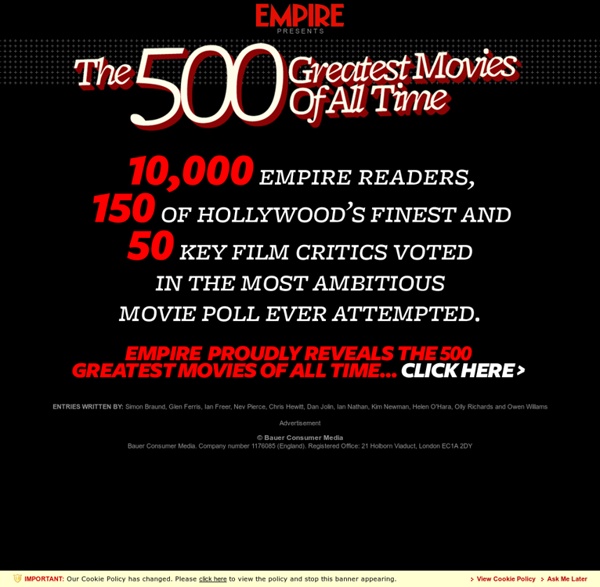 www.empireonline.com - StumbleUpon From Brazil to Japan to France and Senegal, from Neo-Realism to Dogme to J-horror, we've compiled a list of the very best films not in the English language (note: features, not documentaries). So rustle up some sushi, strike up a gauloise and make sure you've locked your bicycle as we count down the top 100 world cinema movies... 100. Night Watch

Top 100 Drama Movies Rotten Tomatoes RT Login Log In Top Movies » Top 100 Drama Movies All lists are sorted by Adjusted Score ? Top 100 Best Acoustic Songs Ever -The Greatest of All Time Here is a list of the best acoustic songs ever written. Acoustic music has come a long way over the years, so many are “oldies” and many are “newies.” We are basing this list off of historical album sales, the ever so objective factor of acoustic-ness, but mostly how easily they make us cry. They are mostly arranged in alphabetical order, by song – so make sure you check out the whole list! Feel free to give your input on suggestions, changes, discards, or songs we may have forgot about.

100 Best Comedy Movies - Film Here's the 100 best comedy movies as chosen by more than 200 people whose job it is to make you laugh. We spoke to dozens of comedy writers, comedy directors, comic actors and stand-up comedians – including Dan Aykroyd, Richard Curtis, Edgar Wright, Kim Noble, Stephen Merchant, Jo Brand and many, many more – and asked them to share with us their favourite comedy films of all time. Can you guess which film emerged as the number one choice? The top 25 must-see movies of 2012 - Den of Geek - StumbleUpon Update: You can now find out list of the top 25 must-see movies of 2013 here.And our 25 must-see movies of 2014 are here. As 2011 draws to a close, one eye is inevitably on the treats that are lying ahead for 2012. With that in mind, we've got our line-up of, as things stands, the 25 films that are brightest on our radar. Now, a couple of disclaimers. There are films that haven't made the cut here simply because we don't know a fat lot about them yet, or at least not enough to get us fired up.

A Stoner's Guide on Beats to Blaze to .1st Edition. Posted by in Compilations, Hip-HopApr 20th, 2010 I decided for this very special occasion that I’d feature some of my favorite songs to get stoned to. First, I’ll start out with my “Top 10 Hip-Hop Songs to Blaze to” and then I’ll move on to a few good albums. Now, the original list featured over 40 songs and included genres other than hip hop, but I decided to cut it down to a top ten hip-hop list for now. If y’all like it then i’ll post some other genres to toke to. Best Film Speeches and Monologues Contemptuous talk-show radio host in Dallas Texas, Jewish radio personality Barry Champlain (Eric Bogosian) held all the phone calls, to tell his listening audience what he really felt about them, as the camera circled around him: Believe it or not, you make perfect sense to me. I should hang. I'm a hypocrite. I ask for sincerity and I lie. I denounce the system as I embrace it.

Top Ten Films 1930-2009 - StumbleUpon 2019 1. LEAVING NEVERLAND (Dan Reed) 2. APOLLO 11 (Todd Douglas Miller) 3. THE BEACH BUM (Harmony Korine) 4. BAIT (Mark Jenkin) 5. TRIPLE FRONTIER (J.C.Chandor) 6. Mind F*ck Films list Explore Lists Reviews Images Update feed Categories MoviesTV ShowsMusicBooksGamesDVDs/Blu-RayPeopleArt & DesignPlacesWeb TV & PodcastsToys & CollectiblesComic Book SeriesBeautyAnimals View more categories » Top 6 Sites that Inspire and Educate & Life Scoop - StumbleUpon If you’re a professional who likes to be intellectually stimulated and you enjoy keeping up with the latest news and breaking trends, the internet provides you with an endless choice of carefully curated sites to visit. Today, we bring you six of them that we believe are leaps and bounds above the rest. These sites will not only educate you on topics ranging from business and technology to art and design, they’ll motivate you to find your own, original ideas and see them through. They’re culturally relevant, they’re idea driven and most of all, they’re deeply inspirational. TED is short for three incredibly important subjects in our modern world; technology, entertainment and design. Started in 1984, TED brings together the most brilliant minds to teach us about issues that matter.