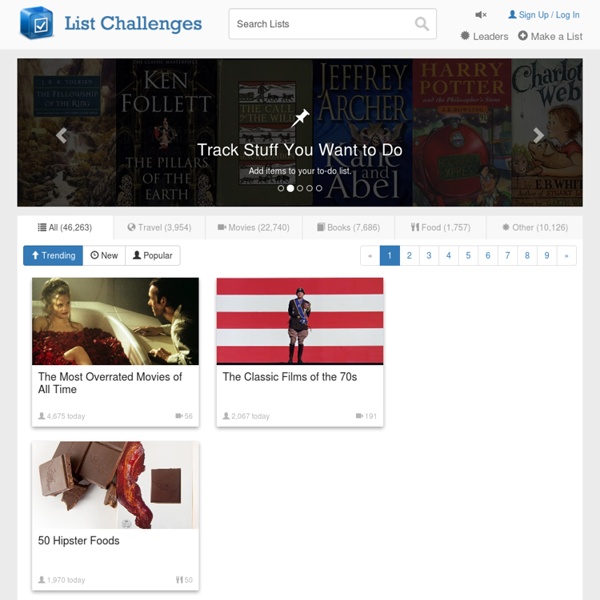 A Long Time Ago, In a Galaxy Not So Far Away (24 pics) Category: Pics | 23 Jan, 2014 | Views: 9287 | +31 | Through The Gates - by Post Death Soundtrack What if Star Wars happened in our world. INTERNATIONAL WOMEN'S DAY 2014 Theme: Inspiring Change International Women's Day 2014 Theme: INSPIRING CHANGE Women's equality has made positive gains but the world is still unequal. International Women's Day celebrates the social, political and economic achievements of women while focusing world attention on areas requiring further action.

Library Book Display Ideas Library users are often overwhelmed trying to choose from the huge selection of books filling the shelves. Libraries that feature books in displays help overcome that problem. The potential reader has a manageable selection to browse through. I spent fifteen years of my library career in Baltimore County Public Library. Maps That Will Help You Understand the World (41 pics + video) Category: Pics | 15 Aug, 2013 | Views: 18044 | +86 | Nature's Beauty - Tiny Dick's Briefs Great selection of maps. Comic Con Program Series at the Main Library Whether you’re into anime or zombies, Superman or Star Wars, comic book fans won’t want to miss the Main Library’s first Comic Con on Sunday, May 5 from 1:00-5:00 p.m. Comic Con This four-hour program will feature a panel discussion with writers and illustrators working in the field, free comic books (in celebration of Free Comic Book Day), a comic book swap, artist and writer’s booths, the opportunity to take pictures with your favorite comic book/movie characters (Stormtroopers, Mandalorian Mercs, X-Men characters and more!), and the Comic Con Drawing Contest award ceremony. When: 1:00-5:00 p.m., May 5 Where: Atrium, Main Library

About — The Book to Art Club The goal of the Book to Art Club is to find hands-on, creative ways to engage with literature – where the process of art-making is more important than the product! How the Book to Art Club works: The Book to Art Club is a book + art-making club that exists virtually and in-person at libraries around the world. Groups or individuals can participate in the Book to Art Club on their own time and with as much or as little direct involvement with the web-based part as they like. Some ways to get involved are: Host your own Book to Art Club. Amazing 3D Fractals Inspired By Faberge Eggs Fractals, repeating patterns that are similar at different scales, are a popular choice for art on paper on flat screens - but artist Tom Beddard has taken them into the third dimension. "I have a fascination with the aesthetics of detail and complexity that is the result of simple mathematical or algorithmic processes," Beddard says. "For me the creative process is writing my own software and scripts to explore the resulting output in an interactive manner.

Sale of book-themed benches raises £250,000 for reading charity A sale of “book benches”, designed to illustrate classics of London literature, has raised more than £250,000 for a reading charity. The 50 brightly coloured benches have been scattered around the capital over the summer in the Books about Town project, a collaboration between public art impresarios Wild in Art and the National Literacy Trust, to celebrate London’s literary history while raising money for the NLT’s work to improve literacy in the UK. At Tuesday’s auction, conducted by Sotheby’s at the Purcell Room on London’s South Bank, the top price of £9,500 was commanded by a Jeeves and Wooster bench, featuring the legs of a presumably legless Bertie stretched out on the croquet lawn at Blandings castle, beside his upturned cocktail glass. It was painted by Gordon Allum. A James Bond bench, painted by Freyja Dean, and a War Horse bench, painted by Gerard Strong from illustrations by the National Theatre stage designer Rae Smith, took £9,000 each.