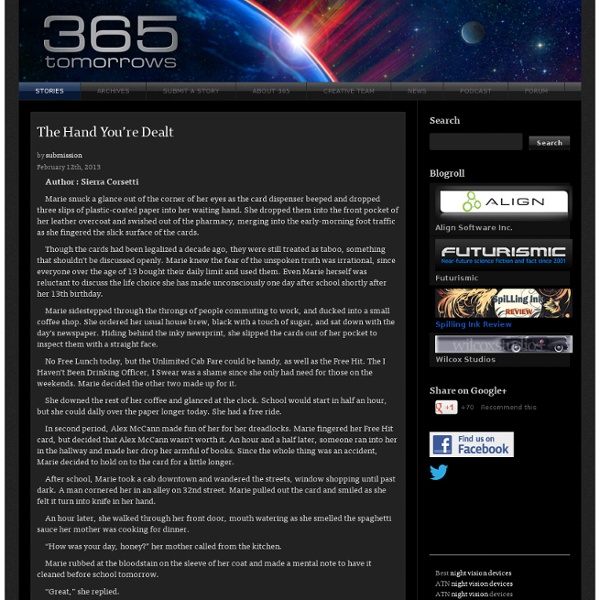 short stories at east of the web A game of Scrabble has serious consequences. - Length: 4 pages - Age Rating: PG - Genre: Crime, Humor A semi-barbaric king devises a semi-barabaric (but entirely fair) method of criminal trial involving two doors, a beautiful lady and a very hungry tiger. - Length: 7 pages - Genre: Fiction, Humor ‘Bloody hell!’ - Genre: Humor Looking round he saw an old woman dragging a bucket across the floor and holding a mop. - Length: 3 pages Henry pours more coal onto the hearth as a gust of wind rattles through the cracked window frame. - Length: 14 pages - Genre: Horror ulissa Ye relished all the comfortable little routines and quietude defining her part-time job at The Bookery, downtown’s last small, locally-owned bookstore. - Length: 8 pages - Age Rating: U The forest looked ethereal in the light from the moon overhead. - Length: 15 pages - Age Rating: 18 Corporal Earnest Goodheart is crouched in a ditch on the edge of an orchard between Dunkirk and De Panne. - Genre: Fiction - Length: 20 pages

How to Build a Universe That Doesn't Fall Apart Two Days Later First, before I begin to bore you with the usual sort of things science fiction writers say in speeches, let me bring you official greetings from Disneyland. I consider myself a spokesperson for Disneyland because I live just a few miles from it — and, as if that were not enough, I once had the honour of being interviewed there by Paris TV. For several weeks after the interview, I was really ill and confined to bed. Science fiction writers, I am sorry to say, really do not know anything. It reminds me of a headline that appeared in a California newspaper just before I flew here. Well, I will tell you what interests me, what I consider important. In 1951, when I sold my first story, I had no idea that such fundamental issues could be pursued in the science fiction field. Finally, in the story, the dog begins to imagine that someday the garbagemen will eat the people in the house, as well as stealing their food. I once wrote a story about a man who was injured and taken to a hospital.

Baen Books Science Fiction & Fantasy - Home Page 36 Writing Essays by Chuck Palahniuk 1: Establishing Your Authority Chuck teaches two principal methods for building a narrative voice your readers will believe in. Discover the Heart Method and the Head Method and how to employ each to greatest effect. 2: Developing a Theme At the core of Minimalism is focusing any piece of writing to support one or two major themes. 3: Using “On-The-Body” Physical Sensation Great writing must reach both the mind and the heart of your reader, but to effectively suspend reality in favor of the fictional world, you must communicate on a physical level, as well. 4: Submerging the “I” First-person narration, for all its immediacy and power, becomes a liability if your reader can't identify with your narrator. 5: Nuts and Bolts: Hiding a Gun Sometimes called "plants and payoffs" in the language of screenwriters, Hiding a Gun is an essential skill to the writer's arsenal that university writing courses almost never touch upon. 6: Nuts and Bolts: “Thought” Verbs 8: Nuts and Bolts: Using Choruses

Isaac Asimov - The Last Question The last question was asked for the first time, half in jest, on May 21, 2061, at a time when humanity first stepped into the light. The question came about as a result of a five dollar bet over highballs, and it happened this way: Alexander Adell and Bertram Lupov were two of the faithful attendants of Multivac. As well as any human beings could, they knew what lay behind the cold, clicking, flashing face — miles and miles of face — of that giant computer. They had at least a vague notion of the general plan of relays and circuits that had long since grown past the point where any single human could possibly have a firm grasp of the whole. Multivac was self-adjusting and self-correcting. For decades, Multivac had helped design the ships and plot the trajectories that enabled man to reach the Moon, Mars, and Venus, but past that, Earth’s poor resources could not support the ships. The energy of the sun was stored, converted, and utilized directly on a planet-wide scale. “Sure you are.

Six Word Stories Written? Kitten! 10 great science fiction novels that have been banned @djscruffy: And that's why you're a heathen and should be burned at the stake. @djscruffy: In defense of public schools, I would suggest that the reason many of these books are challenged so often is that they're frequently included in school curriculums and libraries. I grew up in a state that, according to these links, engaged in book-burning less than a decade before my birth. I suppose I've wandered a bit. @djscruffy: To be fair, it's not usually the schools that want to ban the books, but the few overprotective parents who make wild assumptions about the books we try to teach. Most of us really try to teach the kids to think, rather than becoming nice little automatons.

Pearls of Weber (Introduction) | David Weber We would like to take this chance to thank Joe Buckley (thefifthimperium.com), one of David’s most tireless fans, for his many long hours of effort that have helped us bring this section to you. Joe has chronicled David’s responses on Baen’s Bar for years, and it is because of Joe’s hard work and organization that we are able to bring you these thoughts and answers about the many worlds of Weber. I promise I wasn't really smoking any prohibited substances when this came to me. But, I thought, what the heck, if Heinlein could do it, so can I. I wonder if it's fanfic when the author does it? Despair reigned on HMS Shan-wei’s flag deck as the Gbaba fleet closed in. What had given them away, she wondered? But the how didn't really matter. Howsmyn looked at the display, showing the rest of her fleet. “Deploy and spot the missiles,” she ordered. “Deploying the missiles, aye, Ma’am,” Commodore Cayleb Baytz, her chief of staff replied, hiding his own despair under the crispness of professionalism.

Płytki CD od Baena For all Baen Free Library CDs, zipped ISO images are provided - click on "ZIP" to download them or on the title/picture to browse contents. If you are wondering why some numbers are duplicated, but some other numbers are missing in the names of the CDs, the answer is Because Baen made it so - I have kept their original numbering. I am in no way affiliated with Baen. The files on this CD are not encrypted. You're not supposed to sell the files. Have fun! PS When you grow tired of this disk come visit WebScriptions.net where there are hundreds more eBooks from your favorite Baen authors

Victoria's Advice Column Hi Victoria, I am a poet and the editor of a community journal of literature and visual art. We publish short prose and poetry, as well as the work of local artists. This is an annual, and we have just completed our twelfth journal. It is published by a not-for-profit organization, and my position as editor-in-chief is unpaid. Hi, Judith! My work is both similar to and different from yours. Certainly, my background in editing technical manuals helps enormously with Copy Editing, as yours in editing law books must. However, the real work I do—Developmental Editing and Line Editing fiction and memoir—takes years to learn properly. I know there are, right now, almost as many aspiring editors hoping to break into freelance editing as there are aspiring writers hoping to break into publication. So your competition is enormous. I earned my reputation in freelance independent editing through four years of intensive blogging and editing. So that’s how I did it. I love my job.

Show Some Character! -- Forty-five more flaws that expose your lack of storytelling experience, part 1 So the other day, someone tweeted this post from storyfix.com containing five writing mistakes that, as they put it (and hat-tip to them for the title of this post), “expose your lack of storytelling experience.” I retweeted the link, adding that the real number was probably more like 50 than 5. Twitter people being who they are, now I’m on the hook for the other 45. The problem is, if I put 45 flaws in one blog post, it’s going to be 10,000 words long by the time I’m done and nobody’s going to read that. Clever, those Storyfix folks, limiting themselves to five. Sneaky bastards. 1. 2. 3. 4. 5. 6. 7. 8. 9. Ok. On to part 2 >