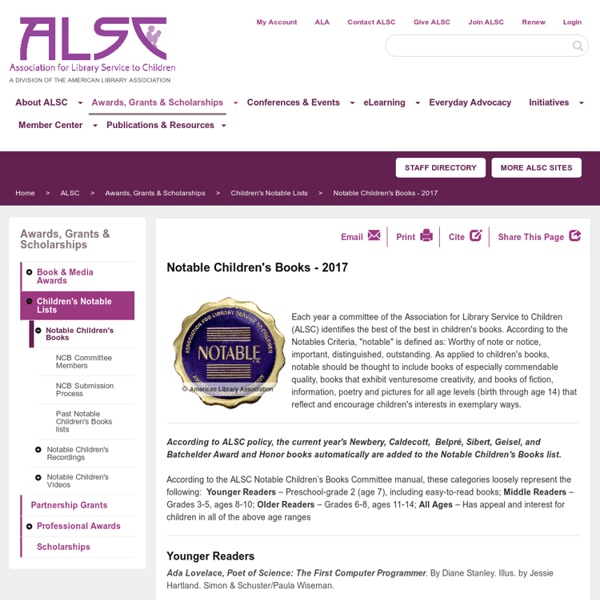 Each year a committee of the Association for Library Service to Children (ALSC) identifies the best of the best in children's books. According to the Notables Criteria, "notable" is defined as: Worthy of note or notice, important, distinguished, outstanding. As applied to children's books, notable should be thought to include books of especially commendable quality, books that exhibit venturesome creativity, and books of fiction, information, poetry and pictures for all age levels (birth through age 14) that reflect and encourage children's interests in exemplary ways. According to ALSC policy, the current year's Newbery, Caldecott, Belpré, Sibert, Geisel, and Batchelder Award and Honor books automatically are added to the Notable Children's Books list. Younger Readers Ada Lovelace, Poet of Science: The First Computer Programmer. This engaging biography introduces nineteenth-century scientist Ada Lovelace, who developed the first algorithm used by the world’s early computers. Counting.

Guided Inquiry Design: The Put-It-All-Together Chart Previous GID posts: #1, #2 As part of our decision-making process for choosing Guided Inquiry (GI), the three librarians (ES, MS, HS) scheduled weekly meetings to read/discuss both of the Guided Inquiry Design books. (If you can only buy one, definitely get the Framework one. It's practical, rather than theoretical.) Another Day, Another Number I'm always looking for good number of the day routines, and I found one on my own campus! One of my sweet 3rd grade teachers gave me the idea for this one. It covers a variety of number skills, and she plans on using the day in school as the number of the day.

Award-Winning Kids' Books Find out about the annual winners of the Newbery Medal, Caldecott Medal, Coretta Scott King Illustrator Award, and Pura Belpré Illustrator Award — as well as other children's book awards from the American Library Association and other literacy organizations. Many organizations end the year with a "best of" list of children's books. Here are links to the awards and lists that we like, including selections from the Children's Book Council, School Library Journal, Horn Book, Parent's Choice, The New York Times, and many more. School libraries and learning – the research Academics, library associations, government agencies and others around the world are publishing very interesting and useful research about school libraries, learning and pedagogical models. Research also shows the the significant difference effective libraries can make to student learning outcomes. Contents Effective school library programmesNew Zealand research - school libraries and learningInternational research - school libraries and learningEducational trends and research into learning Effective school library programmes Several common, contributing factors to student learning and achievement occur in effective school library programmes:

ARKive - Discover the world's most endangered species Wildscreen's Arkive project was launched in 2003 and grew to become the world's biggest encyclopaedia of life on Earth. With the help of over 7,000 of the world’s best wildlife filmmakers and photographers, conservationists and scientists, Arkive.org featured multi-media fact-files for more than 16,000 endangered species. Freely accessible to everyone, over half a million people every month, from over 200 countries, used Arkive to learn and discover the wonders of the natural world.

Association for Library Service to Children (ALSC) The Caldecott Medal was named in honor of nineteenth-century English illustrator Randolph Caldecott. It is awarded annually by the Association for Library Service to Children, a division of the American Library Association, to the artist of the most distinguished American picture book for children. Hello Lighthouse, illustrated and written by Sophie Blackall, published by Little, Brown and Company, a division of Hachette Book Group, Inc. Masterful ink and watercolor illustrations illuminate the story of a lighthouse and the family inside. Stunning images of the lighthouse in all kinds of weather alternate with views of intimate interior detail and circular motifs. Blackall’s skill with composition, line and close attention to detail have created an exquisite book.

Using a Project Wall to Support Gold Standard Project Based Teaching Moving from good to great Project Based Learning involves being aware of the specific, intentional “teacher moves” you make that drive student inquiry, engagement, and excitement for learning. One “move” I made that enhanced my PBL teaching was developing the classroom project wall into an active teaching tool, rather than a bulletin board. The project wall is the visual space in the classroom that helps manage information, project questions, calendars, standards, assessments, and resources that guide student learning during the project. 1. Design and Plan: One of the ironies of PBL done well is that the best projects arise not from spontaneous decision-making but from detailed planning. A powerful project wall will be the classroom hub that shows the results of your planning.

Educational Hip-Hop Contact Us | Log In Songs & Videos The Week in Rap Grades 5 to 12 Vocabulary Grades K to 12 Teaching With Graphic Novels Illustration by Gareth Hinds On March 14, 2013, teachers in the Chicago Public Schools were told, without explanation, to remove all copies of Marjane Satrapi’s graphic novel Persepolis (Pantheon, 2003) from their classrooms. A day later, facing protests from students and anti-censorship organizations, Chicago Public Schools CEO Barbara Byrd-Bennett explained the move. The “powerful images of torture” on a single page of the book made it unsuitable for seventh graders and required the district to give teachers in grades eight through 10 special professional development classes before they could teach it. The book was pulled from classrooms for those grades, but remained in school libraries.

This list contains the best new and award winning childen's book of 2015. The list is organized by age level, making it easy to locate books for certain grade levels/maturity levels. by kmeghanlewis Sep 20