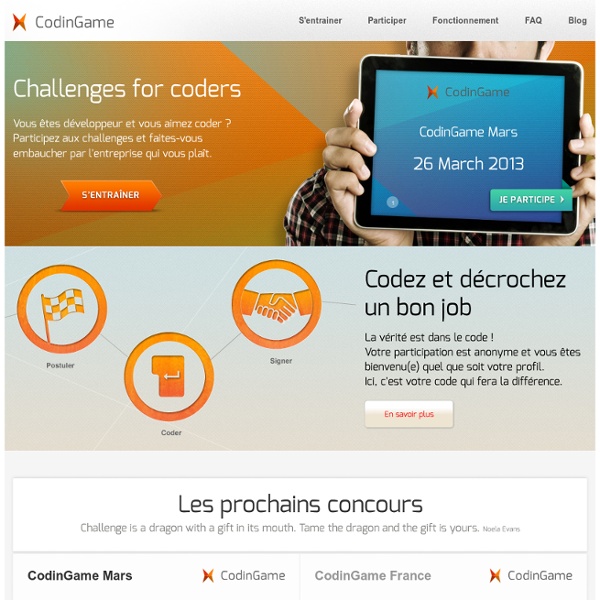 Learn Web Design - Educational Resources Tutorials & Guides Free or Low Cost Keep your hard-earned dollars in your pocket Text-Based Good for those who like to learn via reading and see text code examples Shay Howe's Guides to HTML & CSS How do you build a large-scale quantum computer? How do you build a universal quantum computer? Turns out, this question was addressed by theoretical physicists about 15 years ago. The answer was laid out in a research paper and has become known as the DiVincenzo criteria [See Gallery Sidebar for information on this criteria]. The prescription is pretty clear at a glance; yet in practice the physical implementation of a full-scale universal quantum computer remains an extraordinary challenge. To glimpse the difficulty of this task, consider the guts of a would-be quantum computer. The computational heart is composed of multiple quantum bits, or qubits, that can each store 0 and 1 at the same time.

Code & Conquer Most Important: Have Fun. And earn some badges. See how your strategy works out in different scenarios, challenge other players, receive points, earn badges and climb your way to the top of the leaderboard. Boost your coding skills. Do it playing. Node.js Tutorials and Resources Node.js is increasingly gaining popularity among web developers. Due to all hosting companies Node.js remains the prerogative of dedicated servers and VPS. Actually VPS is a solution that even a small startup can afford. For more details refer to the documentation on nodejs.org. As you know, Node.js supports modules.

Portal:Java Java Platform, Micro Edition Java ME was designed by Sun Microsystems, acquired by Oracle Corporation in 2010; the platform replaced a similar technology, PersonalJava. Originally developed under the Java Community Process as JSR 68, the different flavors of Java ME have evolved in separate JSRs. Sun provides a reference implementation of the specification, but has tended not to provide free binary implementations of its Java ME runtime environment for mobile devices, rather relying on third parties to provide their own. 45 Free Online Computer Science Courses Missed lectures or hate teachers? Or want to study computer science courses without going to university? … You can study anytime anywhere because there are number of free online computer science courses available on internet that are very interactive. Here is the list of 45 free online computer science courses that are designed by teaching experts from best universities of the world (almost the whole graduation!).

How I’m (slowly) moving off the cloud with Nextcloud I bought a Raspberry Pi from Amazon with the goal of moving off of Google Photos to a self-hosted photo backup solution that’s nearly as seamless. My goals for this project: A Nextcloud instance on my internal network which could backup photos from my phoneA VPN to access the server from outside my network with Dynamic DNSAn internal DNS server to allow me to have an internal subdomainSSL/TLS certificate from LetsEncrypt for the internal domain There was one thing I had in mind when coming up with these goals: I didn’t just want my personal cloud to be private, I wanted it to be convenient. Charting the Linux Anatomy by Ed Stephenson 01/29/2001 It wasn't until Tim O'Reilly cut a cross section into an apple that the concept came together. Sitting in the marketing design department at O'Reilly & Associates one day last year, Tim picked up an X-Acto Knife and, slicing to the apple's core, he began to describe how all the disparate components of Linux fit neatly together.