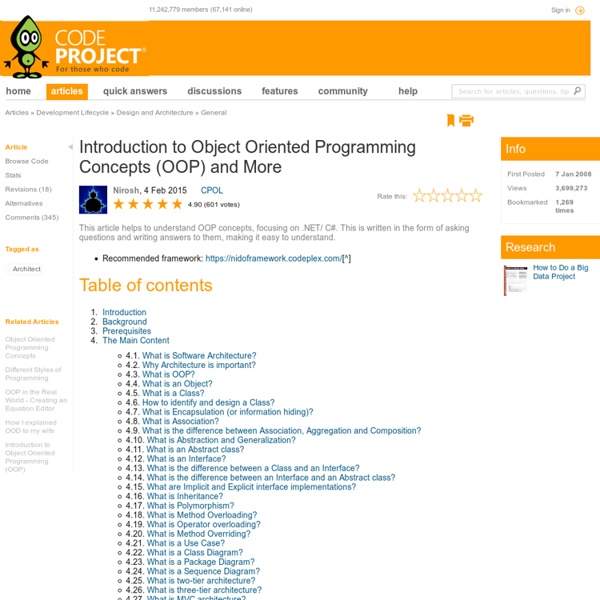 Recommended framework: Table of contents 1. Introduction I have noticed an increase in the number of articles published in the Architecture category in CodeProject during the last few months. One day I read an article that said that the richest two percent own half the world's wealth. Coming back to the initial point, I noticed that there is a knowledge gap, increasing every day, between architects who know how to architect a system properly and others who do not. 2. This article began after reading and hearing questions new developers have on the basics of software architecture. As I see it, newcomers will always struggle to understand the precise definition of a new concept, because it is always a new and hence unfamiliar idea. 3. This article is an effort to provide an accurate information pool for new developers on the basics of software architecture, focusing on Object Oriented Programming (OOP). 4. 4.1. 4.2. 4.3. OOP is a design philosophy. 1.

ArticleS.UncleBob.PrinciplesOfOod The Principles of OOD What is object oriented design? What is it all about? Of all the revolutions that have occurred in our industry, two have been so successful that they have permeated our mentality to the extent that we take them for granted. Programs written in these languages may look structured and object oriented, but looks can be decieving. In March of 1995, in comp.object, I wrote an article that was the first glimmer of a set of principles for OOD that I have written about many times since. These principles expose the dependency management aspects of OOD as opposed to the conceptualization and modeling aspects. Dependency Management is an issue that most of us have faced. The first five principles are principles of class design. The next six principles are about packages. The first three package principles are about package cohesion, they tell us what to put inside packages: Sincerely, Henrik Robert, yes thank you, I'm aware of those. OOP is too flexible. No, we aren't stuck.

Home - Open.Source - everything ! FREE SOFTWARE !!! for Windows, Linux & Mac Alice Programming Tutorial, by Richard G Baldwin Learn to Program using Alice Getting Started In this lesson, you will learn how to download, install, and test the Alice programming environment. You will also learn how to access the tutorials that are provided by the developers of Alice and how to run the example programs that are provided by those developers. Published: March 26, 2007Last updated: April 22, 2007By Richard G. Alice Programming Notes # 100 Preface First in a series This is the first lesson in a series of tutorial lessons designed to teach you how to program using the Alice programming environment under the assumption that you have no prior programming knowledge or experience. My objective in writing this series of lessons is to make it possible for people who have no previous programming experience to learn programming fundamentals using Alice. A lot of fun Because Alice is an interactive graphic 3D programming environment, it is not only useful for learning how to program, Alice makes learning to program fun. The bottom line

Online javascript beautifier Learn HTML 5 in 3 days – Day 1 Introduction HTML 5 is one of the hot topic recent days. So I thought why don’t write a complete learning tutorial about same. It’s going to be a 2 days series article. Note: As a Microsoft guy whenever there is a need for server side technology I will be using C# and Asp.Net. What we won’t cover here? If you don’t know anything about HTML then this article is not for you. You can learn about basic HTML here. Agenda Introduction to HTML 5 Let’s first understand couple of basic and intriguing features about HTML unaware to most of the developers. What is difference between SGML, HTML and XML? What is difference between SGML, HTML and XML? SGML stands for Standard Globalized Markup language is the one used for defining standard markup languages. What is Doc type? When you try to create a HTML page using tools like Dreamweaver or Visual studio you will find following line at the top of the document always. Have you ever wondered what it is? How HTML 5 is different from previous versions? Number Range

JSON Introduction — Problem Solving with Algorithms and Data Structures We stated earlier that Python is an object-oriented programming language. So far, we have used a number of built-in classes to show examples of data and control structures. One of the most powerful features in an object-oriented programming language is the ability to allow a programmer (problem solver) to create new classes that model data that is needed to solve the problem. Remember that we use abstract data types to provide the logical description of what a data object looks like (its state) and what it can do (its methods). A Fraction Class A very common example to show the details of implementing a user-defined class is to construct a class to implement the abstract data type Fraction. A fraction such as consists of two parts. The operations for the Fraction type will allow a Fraction data object to behave like any other numeric value. In Python, we define a new class by providing a name and a set of method definitions that are syntactically similar to function definitions.

Know Your Bugs: Three Kinds of Programming Errors In this lesson, you will learn about the different types of errors that can occur when writing a program. Even the most experienced programmers make mistakes, and knowing how to debug an application and find those mistakes is an important part of programming. Before you learn about the debugging process, however, it helps to know the types of bugs that you will need to find and fix. Programming errors fall into three categories: compilation errors, run-time errors, and logic errors. The techniques for debugging each of these are covered in the next three lessons. Compilation errors, also known as compiler errors, are errors that prevent your program from running. Most compiler errors are caused by mistakes that you make when typing code. Run-time errors are errors that occur while your program runs. An example of this is division by zero. Speed = Miles / Hours If the variable Hours has a value of 0, the division operation fails and causes a run-time error.

jQuery Plugin: Tokenizing Autocomplete Text Entry | James Smith • loopj.com This Project Has Moved! For the latest version and awesome documentation, please head over to: Overview This is a jQuery plugin to allow users to select multiple items from a predefined list, using autocompletion as they type to find each item. Features Intuitive UI for selecting multiple items from a large list Layout controlled fully in CSS, easily customisable Result caching reduces server load No images required, just the plugin’s .js file and some CSS Handles json search data for autocompletion Smooth animations when results load Select items using the mouse or keyboard Screenshots Vertical list style item selection Facebook style item selection Demo A live demo of the token input is available here. Usage Latest documentation can be found here: License This plugin is released under a dual license. Quick Download Please don’t use these links directly in your scripts, I might change their location at any time. Github Project About the Author