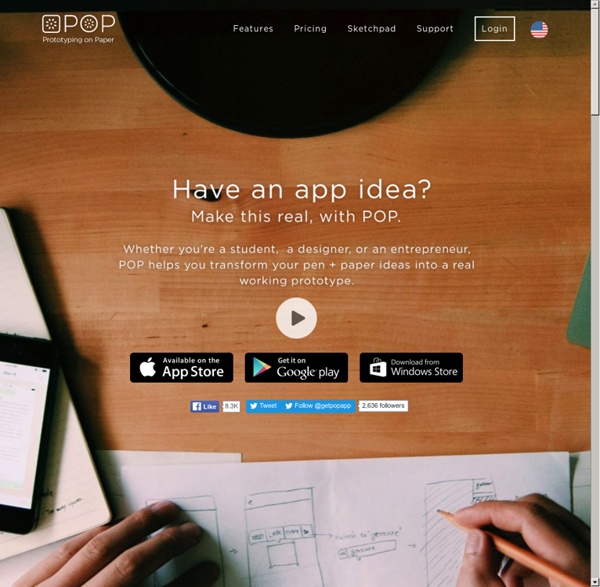 How We Make Great Product Design Happen Data reveals core problems in the app Customers were struggling with Borealis' application. They found it harder and harder to perform day-to-day tasks. Why? The interface was a tangle of various database tables that stored various customer data — one database added atop another. Customers could no longer navigate it easily, impacting their workflow. 7 UX design tools for an effective Scrum workflow As of late we have been running more and more projects using the Agile Scrum method. In fact, our largest projects are almost all conducted in multidisciplinary Scrum teams. And very successfully! Formerly we primarily worked using the Waterfall project methodology, so we had to adjust our workflow. 35+ Best Wireframing Tools and Templates With wireframing tools and templates you can work efficiently and flexible with website designs in the early phases where features and requirements are still being developed. As you know, a good start is often half done. In web design, it is tempting to start out pixel perfect design as early as possible and ship the PSD for being sliced and converted into HTML. However, best practice is to keep the level of detail in the design to an absolute minimum until you are clear on all the features and page elements.

7 Practical Tips for Cheating at Design - Refactoring UI - Medium When there are multiple actions a user can take on a page, it’s easy to fall into the trap of designing those actions based purely on semantics. Frameworks like Bootstrap sort of encourage this by giving you a menu of semantic styles to choose from whenever you’re adding a new button: “Is this a positive action? Inside the clone factory: The Samwer brothers' story This article was taken from the April 2012 issue of Wired magazine. Be the first to read Wired's articles in print before they're posted online, and get your hands on loads of additional content by subscribing online. They have built high-growth companies that were acquired by eBay, Groupon and News Corporation. They have used their profits to invest in Facebook, LinkedIn and Zynga. Their Groupon stake was estimated at more than a billion dollars (£640m) at the close of its shares' first day of trading last November.

Will Mobile Experience be added Google's Ranking Algorithm? Mobile websites have been an important part of the online user experience increasingly over the last few years. So much so that if you don’t have a mobile website, you are potentially missing out of 60% of your traffic. Google has taken notice, and now, just like any good Mother, they are gently nudging us to make user experience on mobile devices as good as we, as humble webmasters, possibly can. As you know, Google has been the ambassador of the user experience for a while now.

Coding Goûter This is part of a short series of articles on Coding Goûter. Read them on ils.sont.la Coding Goûter – “Goûter” being the french for a children afternoon snack – is a monthly event where children and their parents put their hands on various programming tools, algorithmic games and puzzles, development environments, languages. And as it’s an afternoon snack, we eat cakes and candies throughout the afternoon! The first Coding Goûter in Paris took place early December 2011 at the invitation of Jonathan Perret. He hosted the session at the software development company where he is an associate, a company specializing in agile programming. Where to put buttons on forms by Adam Silver Button placement on forms is often ignored or prioritised based on what looks good. But button placement can make or break a form, and a form can make or break a user’s experience. That’s why it’s essential to get it right. This is more challenging that in sounds because it depends on the buttons and the form in question. It also requires us to analyse different forms holistically. Otherwise we could end up with the same button appearing in different places which is inconsistent and confusing.