Seafood Lasagne. First of all spread the frozen shellfish out on a large plate with a double sheet of kitchen paper, and leave to defrost for 1-1½ hours. 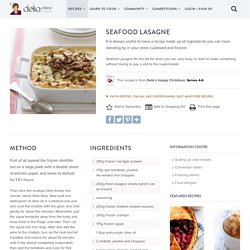 Then slice the scallops fairly thickly into rounds, about 5mm thick. Now heat one tablespoon of olive oil in a medium-size pan and cook the shallots with the garlic and chilli gently for about five minutes. Fried Eggs on Chorizo Hash. Serves 2 This recipe is adapted from Delia's Complete How to Cook. 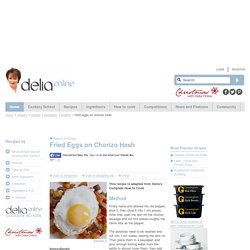 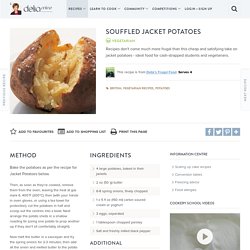 Then, as soon as they’re cooked, remove them from the oven, leaving the heat at gas mark 6, 400°F (200°C), then (with your hands in oven gloves, or using a tea towel for protection), cut the potatoes in half and scoop out the centres into a bowl. Next arrange the potato shells in a shallow roasting tin (using one potato to prop another up if they don’t sit comfortably straight). Macaroni au Gratin. Bring 11/2 pints (850 ml) water to the boil in a large pan with 1 teaspoon salt, add the macaroni and boil without a lid, according to the instructions on the packet. 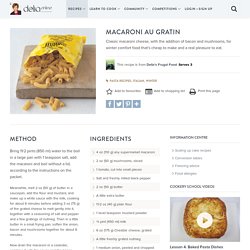 Meanwhile, melt 2 oz (50 g) of butter in a saucepan, add the flour and mustard, and make up a white sauce with the milk, cooking for about 6 minutes before adding 3 oz (75 g) of the grated cheese to melt gently into it, together with a seasoning of salt and pepper and a few gratings of nutmeg. Then in a little butter in a small frying pan, soften the onion, bacon and mushrooms together for about 6 minutes. Now drain the macaroni in a colander, combine it with the sauce and the bacon, onion and mushroom, then place the whole mixture in a buttered 2 pint (1.2 litre) baking dish.

Sprinkle the rest of the cheese on top, plus the pieces of tomato. Finish off by placing the dish under a hot grill until golden brown and bubbling. Cheese and ham croque-monsieur bread pudding recipe. Split Pea and Vegetable Soup. Marinated Halloumi Cheese Kebabs with Herbs and Fresh Mexican Tomato Salsa. Begin by cutting the pepper and onion into even-sized pieces, about 1 inch (2.5 cm) square, to match the size of the cubes of cheese. 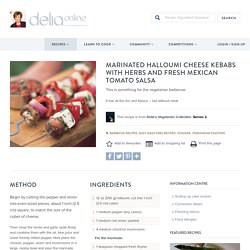 Poulet a la Catalane. Grilled Lemon Chicken Kebabs with Gremolata. Begin by chopping each piece of chicken into 5 chunky pieces, leaving the skin on, and place them in a bowl, along with the lemon juice and zest, oil, garlic, oregano, white wine vinegar and plenty of seasoning. 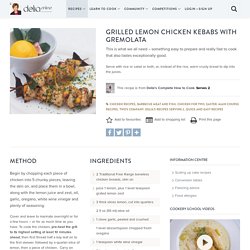 Cover and leave to marinate overnight or for a few hours – or for as much time as you have. To cook the chicken, pre-heat the grill to its highest setting at least 10 minutes ahead, then first thread half a bay leaf on to the first skewer, followed by a quarter-slice of lemon, then a piece of chicken. Carry on alternating the lemon and chicken until you have used 5 pieces of chicken, finishing off with a lemon quarter and another bay leaf half at the end and making sure you pack everything together as tightly as possible. Roasted Monkfish with Romesco Sauce. First, to make the sauce, put the whole garlic cloves, tomatoes and hazelnuts into a shallow roasting tray in the oven for 10 minutes, then add the chillies. 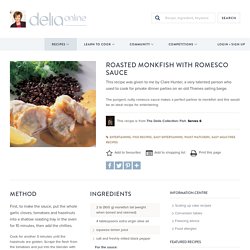 Cook for another 5 minutes until the hazelnuts are golden. Scrape the flesh from the tomatoes and put into the blender with the egg yolk, chillies, hazelnuts and garlic. Blend on high speed and add the olive oil slowly to make a smooth sauce. Welsh Rabbit (Rarebit) with Sage and Onions. Patatas Arequipa. Potted Pork with Juniper and Thyme, with a Marmalade of Apples, Raisins and Shallots.

All you do here is place the meats, garlic, mace and thyme in a mixing bowl. 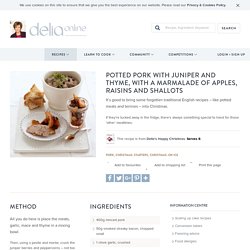 Then, using a pestle and mortar, crush the juniper berries and peppercorns – not too finely. Add these, along with the brandy and salt, then give everything a really thorough mixing. Now pack the mixture into the bowl, press the thyme sprigs and juniper berries onto the surface, then cover with double sheet of foil, twisting it to make a kind of lid. Place it on a baking tray then into the oven to cook slowly for 11⁄2 hours. Then remove it from the oven, place some scale weights (or something else heavy) on top to firm it up and leave to get quite cold before transferring to the fridge. Marmalade of Apples, Raisins and Shallots:This also goes well with any other pâté, terrine or pork dish. Delia macaroni au gratin - Buscar con Google. Marinated Chicken in a Jar.

Begin by cutting each chicken breast into five pieces and placing them in the jar. 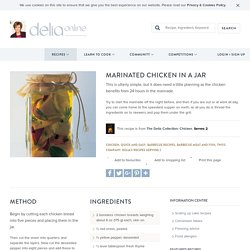 Baked Fish Souffle. Flake the fish, discarding the skin and bones as you go, then put it on one side while you make a sauce by melting the butter in a saucepan and stirring in the flour. 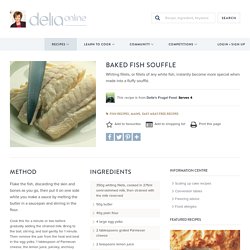 Cook this for a minute or two before gradually adding the strained milk. Bring to the boil, stirring, and boil gently for 1 minute. Then remove the pan from the heat and beat in the egg yolks, 1 tablespoon of Parmesan cheese, the lemon juice, parsley, anchovy essence or paste, spring onions and the fish. Season well with salt and ½ teaspoon of cayenne pepper. Next whisk the egg whites to the stiff-peak stage. Scallops in the Shell. Start by slicing the white parts of each scallop into rounds about 5mm thick, and cut any larger corals in half and put them to one side. Marinated Chicken Kebabs with Whole Spices. Begin by dry-roasting the cumin and coriander seeds and the cardamom pods over a medium heat for 1 minute, until the seeds begin to jump.

Remove from the heat and, once cool, remove the seeds from the cardamom pods and crush them with the cumin and coriander seeds using a pestle and mortar. Next add the ginger, turmeric, garlic and salt and mix everything well. Now cut each chicken breast into 5 pieces, place them in a bowl and toss them first in the groundnut or flavourless oil, then in the spice mixture, mixing everything around so they get an even coating. Pork Chops with Sage and Apples. Boston Baked Beans. Measure 3 pints (1.7 litres) water into a large saucepan, add the beans, bring to the boil and boil gently for about 2-3 minutes; then remove the pan from the heat and leave on one side for about 1 hour, or until the water has cooled.

Now return the beans to the heat and simmer uncovered until the bean skins burst when you lift them out of the water (which will take around 45 minutes). Drain the beans next, reserving the liquor, then measure the liquor and make it up to 1 pint (570 ml) with water if necessary. Transfer the beans to a casserole and pre-heat the oven to gas mark ½, 250°F (120°C). Flaky Fish Pie. To make the pastry, first of all remove a pack of butter from the fridge, weigh out 6 oz (175 g) then wrap it in a piece of foil and return it to the freezer or freezing compartment of the fridge for 30-45 minutes. Then, when you are ready to make the pastry, sift the flour and salt into a large roomy bowl.

Take the butter out of the freezer, fold back the foil and hold it in the foil, which will protect it from your warm hands. Then, using the coarse side of a grater placed in the bowl over the flour, grate the butter, dipping the edge of the butter into the flour several times to make it easier to grate. What you will end up with is a large pile of grated butter sitting in the middle of the flour. Now take a palette knife and start to distribute the gratings into the flour – don't use your hands yet, just keep trying to coat all the pieces of fat with flour. When you're ready to cook the pie, pre-heat the oven to gas mark 7, 425ºF (220ºC). Summer Crudités with Three Dips.

Return to listing This is a real celebration of summer – young, fresh salads and crisp vegetables served with three well-flavoured dips. Serves 6 to 8 people as a first course or 12 to 15 at a drinks party This recipe first appeared in Sainsbury’s Magazine (Dairy Collection). For the avocado, Feta cheese and garlic dip: begin by halving the avocado and removing the stone. Then scrape out all the flesh, including the greenest part next to the skin, into a processor, together with the remaining ingredients. To make the fresh lemon, soured cream and almond dip: simply mix all the ingredients in a bowl, then season to taste. To make the carrot, coriander and fromage frais dip: first of all, dry-roast the coriander and cumin seeds in a small pan over a medium heat for about 45-60 seconds.

Pumpkin Soup with Toasted Sweetcorn. Roast Leg of Lamb with Shrewsbury Sauce. Pasta with Pepper Relish. Watercress and Caper Mash. Use a potato peeler to pare off the potato skins as thinly as possible, then cut the potatoes into even-sized chunks – not too small; if they are large, quarter them, and if they are small, halve them. Put the potato chunks in a steamer fitted over a large pan of boiling water, sprinkle 1 level dessertspoon of salt all over them, put a lid on and steam the potatoes until they are absolutely tender – they should take 20-25 minutes. Soused Herrings. First of all make the marinade in a saucepan by combining the vinegar, spices, chilli, bay leaves and sugar with 5 fl oz (150 ml) water.

Bring to boiling point, then simmer very gently for 5 minutes. Slimmers' Wild Mushroom Risotto. First of all, give the dried mushrooms a quick rinse in a sieve under cold, running water, then place them in a heatproof bowl and pour 1 pint (570 ml) boiling water over them. Then just leave them to soak and soften for about 30 minutes. Meanwhile, chop the fresh mushrooms into chunks – not too small, about ½ inch (1 cm), as they shrink quite a bit in the cooking. Now pre-heat the oven to gas mark 2, 300°F (150°C). Spinach Gnocchi with Four Cheeses. Oven-sauteed Potatoes with Red Onion, Garlic and Rosemary. Roasted Salmon Fillets with a Crusted Pecorino and Pesto Topping. Scrambled Eggs with Smoked Salmon on Crisp Toasted Bagels. The salmon needs to be chopped fairly small for this, so if you're using offcuts you might still need to chop some of the larger pieces.

I say chop here, but very often I use scissors. Poached Eggs with Souffléd Welsh Rarebit. First heat some water in a frying-pan with a little salt ready to poach the eggs in. Thai Green Curry with Chicken. The curry paste can be made well ahead of time and there's absolutely no work involved if you have a food processor or a liquidiser because all you do is simply pop all the curry paste ingredients in and whiz it to a paste (stopping once or twice to push the mixture back down from the sides on to the blades). English Potted Crab. Luxury Fish Pie with Rosti Caper Topping. Bruschettas with Goats' Cheese, Basil and Tomato. Lentil and Vegetable Curry. Haricot and Lentil Chilli. Chickpea Salad. Turkey Flan with Leeks and Cheese. Carrot and Leek Soup. Asparagus and Gruyere Feuilletés.