I Won't Hire People Who Use Poor Grammar. Here's Why. - Kyle Wiens 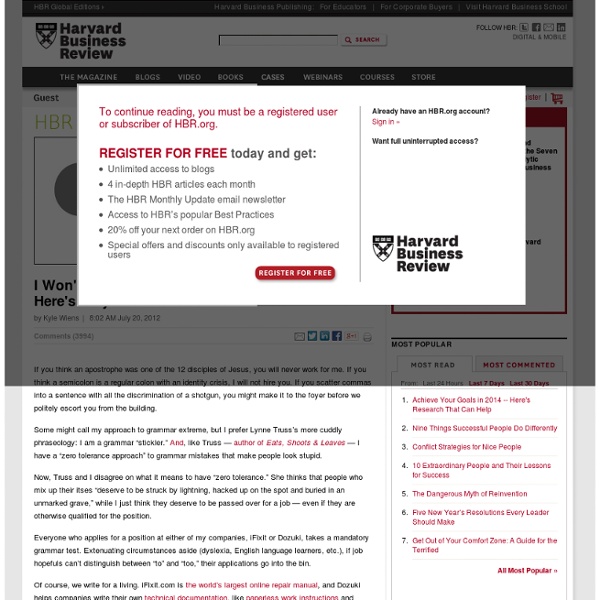 by Kyle Wiens | 8:02 AM July 20, 2012 If you think an apostrophe was one of the 12 disciples of Jesus, you will never work for me. If you think a semicolon is a regular colon with an identity crisis, I will not hire you. If you scatter commas into a sentence with all the discrimination of a shotgun, you might make it to the foyer before we politely escort you from the building. Some might call my approach to grammar extreme, but I prefer Lynne Truss’s more cuddly phraseology: I am a grammar “stickler.” Now, Truss and I disagree on what it means to have “zero tolerance.” Everyone who applies for a position at either of my companies, iFixit or Dozuki, takes a mandatory grammar test. Of course, we write for a living. iFixit.com is the world’s largest online repair manual, and Dozuki helps companies write their own technical documentation, like paperless work instructions and step-by-step user manuals. But grammar is relevant for all companies. Wrong.

Grammar: A Matter of Fashion Draft is a series about the art and craft of writing. “Much was said, and much was ate, and all went well.” Clearly this sentence was written by a fourth grader – or at best someone not ushered into acquaintance with “proper” grammar. Like, say, Jane Austen? That’s straight out of her novel “Mansfield Park.” Linguists insist that it’s wrong to designate any kind of English “proper” because language always changes and always has. Fair enough – but there’s a middle ground. Those who ignore rules of fashion exercise little influence in society, whether we like it or not. We are taught that a proper language makes perfect logical sense, and that allowing changes willy-nilly threatens chaos. Not to the Stone Age: just to the 19th century, to the characters in, say, Edith Wharton’s novels. Sabine Dowek To say the house is being built felt slangy and newfangled to many. So, hemlines went up, while Lobster Newburg, chintz and sarsaparilla fell out of fashion. Today, we have our own fads.

Questioningly Winner: Meet the Bwam Mark On Friday we asked for new punctuation marks. The old ones, like that comma right there or the period that ended the last sentence, suddenly seemed insufficient. We wanted more … but we didn’t want to lift a finger to get them—and that’s why we enlisted our readers. They came, saw, reassessed existing punctuation, and went to work. Some of the new marks were pure slapstick (@cehickman’s slapdash, which was not designed but was described as “useful when you just can’t be bothered to give your sentence structure too much thought”) or @krissyt67’s comalipses (“comma w/ ellipses stacked on top for when a writer loses their train of thought & falls into a deep asleep”). Some drew upon celebrity affectations. Some amended existing punctuation technology: @AlexColangelo derided the interrobang, proposing that there be a new way of expressing incredulity, and @ponder76 proposed putting a comma at the bottom of the exclamation point instead of a period. On to the best.

Lu Burke, New Yorker Copy Editor The words “millionaire” and “copy editor” hardly ever occur in the same sentence, much less in the same person, but Lu Burke, who worked at this magazine from 1958 to 1990, when she retired to Southbury, Connecticut, was that rare thing: a copy editor who became a millionaire. A year after Lu died, in October, 2010, reportedly of leukemia, we heard that she had willed her entire estate, of more than a million dollars, to the Southbury Public Library. I hadn’t stopped to see her in years, because lunch at Friendly’s, with Lu hungry for gossip about the old crew, turned a three-and-half-hour drive from New York to Massachusetts into a daylong journey. I felt bad about that, and finding out that Lu had been sitting on a million dollars made me feel a little better, only because I realized that I couldn’t feel any worse. Lu was the originator of the comma shaker. We knew she wore Earth shoes and bluejeans and jewel-neck sweaters and stud earrings. 2—The Library 3—The Family

15 Wonderful Words With No English Equivalent The Global Language Monitor estimates that there are currently 1,009,753 words in the English language. Despite this large lexicon, many nuances of human experience still leave us tongue-tied. And that’s why sometimes it’s necessary to turn to other languages to find le mot juste . Here are fifteen foreign words with no direct English equivalent. 1. Zhaghzhagh (Persian) The chattering of teeth from the cold or from rage. 2. 3. 4. 5. 6. A word that would aptly describe the prevailing fashion trend among American men under 40, it means one who wears the shirt tail outside of his trousers. 7. 8. 9. 10. 11. 12. 13. 14. 15. Many of the words above can be found in BBC researcher Adam Jacot de Boinod's book ' The Meaning of Tingo and Other Extraordinary Words from Around the World.'

Writing Excuses 7.41: Seven-Point Story Structure If you’ve ever had difficulty outlining something, this episode might be a perfect fit for you. We discuss the Seven-Point Story Structure, an outlining system Dan uses in which the story moves forward along seven sequential points. Dan originally acquired this from a role-playing book, but it also sees regular use in screenwriting. Dan walks us through the system, and we hold his feet to the fire on behalf of Lou Anders, who once privately confessed to Howard that he just couldn’t get this thing to work. Here, without any flavor text, are the seven points: HookPlot Turn IPinch IMidpointPinch IIPlot Turn IIResolution While these are (obviously) not the only seven things that happen in your book, these are the key things that are working together to move you from hook to resolution. After an explanation of the system, we brainstorm this on Dan’s “I.E.Demon” story in order to demonstrate the tool for you. Audiobook Pick-of-the-Week: Enchanted, by Alethea Kontis, narrated by Katherine Kellgren

14 More Wonderful Words With No English Equivalent Earlier this year, Bill DeMain introduced us to 15 Wonderful Words With No English Equivalent . Now that you've integrated those into your vocabulary, here are 14 more. 1. 2. 3. 4. 5. 6. 7. 8. 9. 10. 11. 12. 13. 14. 15 English Grammar Mistakes to Avoid [Infographic English is not my mother tongue (I’m sure many readers of Ebook Friendly can say that about themselves), and I’m always delighted to study such entertaining pieces of advice like the infographic below. Copyblogger is a top destination for online writers. Together with BlueGlass they’ve prepared absolutely wonderful infographic, which lists common English grammar mistakes. I’ve seen many times native English writers making such goofs as confusing “your” with “you’re”, or “their” with “they’re”. No matter which language you speak most, enjoy the infographic! Via 15 Grammar Goofs That Make You Look Silly | Copyblogger. About Piotr Kowalczyk Founder of Ebook Friendly. InfoPostsTwitterGoogle+ Leave a comment Get free updates via email Powered by MailChimp Featured products Google Case for Nexus 7 Grey/Red This original Google case for the 7-inch Nexus 2013 is available in four color patterns, and features a built-in stand for viewing and typing. Average rating: 3.9/5 Amazon $38.20 Average rating: 4.8/5

Daily Writing Tips SEEING THE WORLD THROUGH BOOKS » Blog Archive » Junichiro Tanizaki–A CAT, A MAN, AND TWO WOMEN Note: The Tanizaki Prize is one of Japan’s premier prizes, awarded to a work of fiction or drama each year in honor of author Junichiro Tanizaki (1886 – 1965) “Please consider, Fukuko: I gave you the man who meant more to me than life itself! And not only that – I gave you everything from that happy household we’d built together as a couple. I didn’t take so much as a broken teacup away with me. I didn’t even get back most of the things I brought with me when I married him!…I’ve been beaten up, knocked down, and trampled on. Irony is too mild a word to describe the twists, surprises, and reversals which bring this book so wildly alive that it is almost impossible to believe the book is not written by a contemporary author. This photo of Tanizaki with his cat appears on the back cover of an earlier edition of this novel, published in 1990, by Kodansha. Tankzaki's house in Kobe is now a museum. The spartan room where the author worked. The reporter finds Prof.

How to get kids reading and writing over the summer - The Answer Sheet This was written by Anindita Basu Sempere, executive director of TheWritingFaculty.com. By Anindita Basu Sempere The summer reading lists provided by schools and libraries have two purposes: to foster a love of reading and to keep students intellectually engaged over summer. These book lists span genres and styles, from classics to nonfiction and from poetry to paranormal fiction. Unfortunately most students fall out of the habit of writing during summer vacation unless they are given assignments. The following set of exercises builds the critical reading and writing skills that students develop in school by encouraging them to write for themselves. Reviews and Opinion As both parents and educators know, children and adolescents have strong opinions on everything from when to get a cell phone or Facebook account to national politics. Change Your Perspective Retell a story or a scene from the perspective of another character. Journals Blogging Moving Off the Page Descriptions Monologues

13 Little-Known Punctuation Marks We Should Be Using SOURCE: Because sometimes periods, commas, colons, semi-colons, dashes, hyphens, apostrophes, question marks, exclamation points, quotation marks, brackets, parentheses, braces, and ellipses won’t do. 1. Interrobang You probably already know the interrobang, thanks to its excellent moniker and increasing popularity. Though the combination exclamation point and question mark can be replaced by using one of each (You did what!? 2. The backward question mark was proposed by Henry Denham in 1580 as an end to a rhetorical question, and was used until the early 1600s. 3. It looks a lot like the percontation point, but the irony mark’s location is a bit different, as it is smaller, elevated, and precedes a statement to indicate its intent before it is read. 4. Among Bazin’s proposed new punctuation was the love point, made of two question marks, one mirrored, that share a point. 5. 6. Need to say something with unwavering conviction? 7. 8. 9. 10.

Fifth Grade Language Skill Builders - Spelling <p><a href=" Menu by Deluxe-Menu.com</a></p> a 5th Grade Interactive Language Arts Skill Builders Home > Grade Level Help > 5th Grade Skill Builders > Language Arts Activities advertisement Spelling - CCSS L.5.2 Links verified on 10/04/2013 Choose the correct spelling - Quia Quiz. Search Internet4Classrooms Custom Search Internet4classrooms is a collaborative effort by Susan Brooks and Bill Byles. Use of this Web site constitutes acceptance of our Terms of Service and Privacy Policy. A Scrapbook of Styles - Passages for Rhetorical Analysis These excerpts from essays, short stories, autobiographies, and novels--most of which were published over the past 50 years--illustrate some of the key stylistic traits of their well-known authors. Edward Abbey's List of Examples in "The Great American Desert"In this passage from chapter two of "Journey Home," rogue environmentalist Edward Abbey identifies some of the most unappealing characteristics of desert life through a series of vivid examples. Hyperbole in Martin Amis's "Money"Note the effects created by hyperbole, tricolons, and crots in these two paragraphs from Martin Amis's novel "Money." Ritual in Maya Angelou's "Caged Bird"In these paragraphs from the first volume of her autobiography, "I Know Why the Caged Bird Sings," Maya Angelou recalls the first funeral that she attended as a child--and her first encounter with the fact of her own mortality. Russell Baker's Sketch of Mr. Evan S. Ritual in Doctorow's "World's Fair"With his customary attention to precise details, E. F.